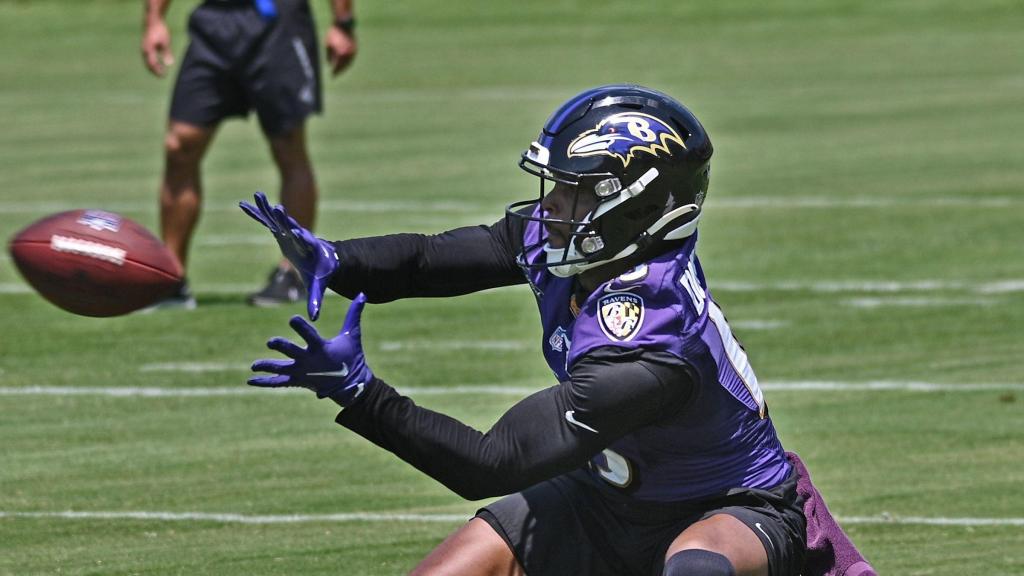 Ravens wide receiver Devin Duvernay suffered a thigh bruise after colliding with safety Chuck Clark on a sideline throw in an 11-on-11 period during Saturday night’s open practice at M&T Bank Stadium.

Duvernay and Clark appeared not to see each other as they tracked the overthrown ball, with Duvernay running up the right sideline and Clark coming downhill from his deep zone.

Duvernay hobbled off the field before athletic trainers tended to him on the sideline. After stretching, he remained on the field, though he did not return to practice.

Coach John Harbaugh said Duvernay could’ve returned, but he was held out for precautionary reasons.

Duvernay, who’s in line to open the season as the Ravens’ No. 2 wide receiver, has had a solid start to training camp. The Ravens have Sunday off before returning to practice Monday.

Boyle sat out roughly 30 minutes of Thursday’s session, spending time talking to trainers and stretching before eventually coming back to run a few plays with the offense. Williams likely received a veteran day off Friday.

Harbaugh said Cleveland, a third-round pick in 2021, hasn’t been limited by injury in his conditioning test attempts.

“I know he can do it. He’s just got to go out there and do it,” Harbaugh said.

Rookie tight end Charlie Kolar, who is undergoing sports hernia surgery, and rookie outside linebacker David Ojabo, who is still unsigned and holding out of camp, also did not participate.

Tucker hits a long one

Quarterback Lamar Jackson connected with second-year receiver Rashod Bateman for a nearly 50-yard pass during the 11-on-11 portion of practice.

Jackson, who is entering the final year of his rookie deal, has had a strong start to camp.

“He’s throwing it better than I’ve ever seen him throw it,” offensive coordinator Greg Roman said after Friday’s practice.

The Ravens announced that attendance for Saturday night’s open practice was 26,417. The team said Friday that all 40,000 passes were claimed.