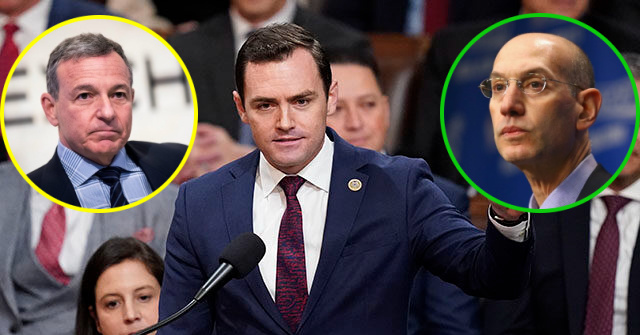 Rep. Mike Gallagher (R-WI) announced his plans to summon Disney CEO Bob Iger and NBA Commissioner Adam Silver to appear before the Select Committee on China, putting the companies on notice for their “bending the knee” to Chinese President Xi Jinping and the Chinese Communist Party (CCP).

In an interview with talk radio host Hugh Hewitt on his eponymous show on Wednesday, Wisconsin Republican Mike Gallagher asserted that the newly created committee seeks to put America “in a position where we can win this new Cold War and we can deter World War III in the near term — where we can enhance our deterrent posture.”

Calling on Big Tech to “confront the growing suspicion about their allegiances, the growing suspicion about their practices, [and] the perception that there’s a complete lack of transparency,” Gallagher said he would grant tech companies with a “more patriotic view… [who] recognize how essential they are to us winning this long-term competition with China,” an opportunity to “talk about how we win.”

“We cannot win this unless we have American companies that are out innovating their Chinese counterparts and indeed think of themselves as Americans,” he stated.

He also issued a “warning” to the Walt Disney Corporation in the form of Bob Iger, and the NBA in the form of Commissioner Silver, for their ties to China.

“Consider this me giving them the initial warning order that they’ll have to testify before the committee,” Gallagher said, adding that regarding Hollywood or Disney, he would be “willing to go out and sit down with them where they are [and] engage with them in a discussion.”

Such a conversation, he stated, would need to take place before the American people.

“I think it drives the American people crazy when they see the NBA bending the knee to Xi Jinping,” he said. “It really drives them crazy.”

The Wisconsin Republican also warned that the relationships between China and the sports and entertainment giants provide a “preview of what’s going to happen to the rest of our domestic industries if we allow the Chinese Communist Party to control the commanding heights of technology and the economy.”

“That’s not just isolated to the greedy executives in Hollywood or the NBA,” he added. “That’s a preview of things to come if we do not change course with a sense of urgency.”

Gallagher, who serves on the House Armed Services and House Permanent Select Committee on Intelligence, was selected by Speaker McCarthy to serve as Chairman of the Select Committee on Strategic Competition between the United States and the Chinese Communist Party, following a bipartisan House vote to create the committee.

In a floor speech urging his colleagues to support the committee, Gallagher highlighted the need to “understand the urgency of the threat” of the CCP, claiming “there is no more critical challenge facing our nation today.”

He also explained that the committee will focus on reclaiming U.S. economic independence in key areas and on exposing the CCP’s strategy to undermine American leadership, while pushing to ensure that a distinction is drawn between the CCP and the Chinese people — who are “often the primary victims of CCP aggression and repression.”

“We need to have a united front, here in Congress, to counter the Chinese Communist party,” he added.

In a press release from Tuesday, Gallagher called for a bipartisan “pushback against the Chinese Communist Party’s aggression.”

Returning CEO Bob Iger is particularly close with Chinese leaders, once having even expressed interest in becoming ambassador to China under President Biden.

He came under fire in 2019 for refusing to condemn China’s brutal crackdown on pro-democracy protests in Hong Kong.

Under Iger’s leadership, Disney forbade ESPN journalists from addressing any discussion of the relationship between China and Hong Kong.

Meanwhile, America’s sports owners have long been in bed with Communist China.

According to a report from last year, the NBA and its various owners have over $10 billion invested in China.

Previously, Gallagher warned the U.S. could lose the new “Cold War” facing America, claiming the country is “dangerously dependent” on Beijing, and demanding to “aggressively decouple anything associated with the military-civilian fusion.”