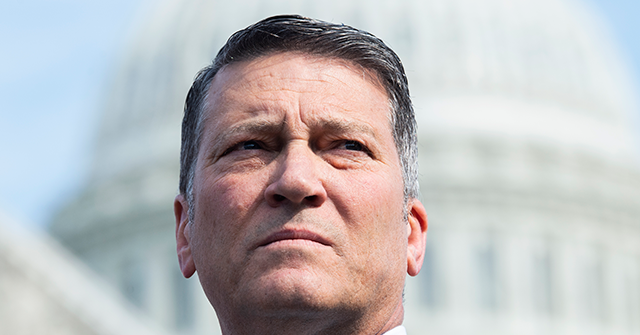 President Joe Biden “has blood on his hands” for his financing of terrorism in order to “score cheap political points with the antisemites in his party,” according to Rep. Ronny Jackson (R-TX), who announced his recent filing of a lawsuit against the current administration “to stop them from breaking the law.”

In an exclusive statement to Breitbart News, Texas Congressman Ronny Jackson began by praising former President Donald Trump for his “legacy” which includes taking action to prevent the funding of terror.

The Taylor Force Act, named for an Army veteran killed by a Palestinian terrorist while visiting Israel in 2016, was championed by Republicans and signed by President Trump in 2018.

It prohibits sending U.S. aid to the Palestinian Authority (PA) as long as it continues to pay stipends to Palestinian terrorists in Israeli prisons and families of the deceased.

“[Biden] has violated federal law and financed terrorism to score cheap political points with the anti-Semites in his party,” he said.

Jackson, who served as the former White House physician for Presidents George W. Bush, Barack Obama and Donald Trump, also accused the president of having “blood on his hands.”

“Make no mistake: Joe Biden has blood on his hands,” he said.

He concluded by highlighting his legal suit against the current administration for its crimes.

“In partnership with America First Legal and my fellow plaintiffs, I am suing the Biden Administration to stop them from breaking the law,” he said.

The lawsuit, filed by Jackson and American victims of Palestinian terror attacks, claims the Biden administration is breaking federal law by resuming U.S. aid to the Palestinian government — having awarded the PA with roughly half a billion dollars, of which funds are used to pay convicted terrorists and their families.

The conservative America First Legal (AFL), which aims to fight against “lawless executive actions and the Radical Left,” filed the suit in federal court on Tuesday against President Biden and Secretary of State Antony Blinken for violation of the Taylor Force Act.

“For decades, the PA – lavishly funded by the U.S. and other Western governments – has paid terrorists to indiscriminately murder and maim people living in or visiting Israel. Among other things, the PA’s ‘Pay to Slay’ program rewards terrorists and their families with cash bounties based on the number and severity of the civilian casualties they inflict,” the group’s site reads.

Yet, it notes, under President Biden, “the government has lawlessly transferred hundreds of millions U.S. taxpayer dollars to directly benefit the Palestinian Authority.”

“President Biden and Secretary Blinken are violating the law and financing the PA’s violent extremism and virulent, eliminationist antisemitism,” it continues.

The lawsuit can be read here.

Reed Rubinstein, AFL’s senior counselor and director of oversight, told Breitbart News that the president was “ignor[ing] the law” in his “mad drive” to fund Palestinian terrorists.

“Biden has bragged about dumping a billion U.S. taxpayer dollars into the corrupt and murderous Palestinian Authority,” he said. “The Taylor Force Act — named after a West Point graduate and veteran of Iraq and Afghanistan who was murdered by a Palestinian terrorist — prohibits Biden’s give-away.”

“But in his mad drive to give our dollars to the Palestinians, Biden ignores the law and dishonors the memory of a brave American,” he added.

In April, Israel’s Supreme Court ruled the Palestinian Authority can be held liable for terrorism and sued by the families of those killed in terror attacks, as a result of its so-called “pay-for-slay” policy granting salaries to convicted terrorists and their families.

The Palestinian Authority tried to hide its payment of terrorists salaries in 2020, but we’ve found them.

It’s time the international community demanded clear reporting from the PA on its spending, rather than putting up with cheap accounting tricks. https://t.co/rHk98n3ZDM

Though Palestinian Authority President Mahmoud Abbas has repeatedly vowed he would never stop rewarding terrorists, even if it was down to its last penny, the Biden administration reinstated aid to the PA last year.

Palestinian Authority’s Mahmoud Abbas hailed two terrorists who were killed by Israeli troops a few days ago as “heroes,” telling their families in a phone call this week the nation of “Palestine” was in mourning for them. https://t.co/hBAM6bZ4Bj

In September, Jackson asserted that President Biden’s incompetence was inspiring enemies like Iran, China and Russia.

“This man is going to be eighty years old next month; he looks absently horrible; he looks like he’s going to fall asleep at any minute when he speaks,” he said. “He slurs his speech; he shuffles when he walks, blank stare, shaking hands with people who don’t exist — he’s talking to dead people now.”

“This man is inspiring our enemies,” he added. “The people who are watching this most closely are Iran and China and Russia. They are inspired by what they see because they realize we do not have competent leadership in this country. Something very bad is going to happen in the near future with this man at the helm.”

Fore you, Canada! People golfing in Halifax as rest of country braces for winter wallop

Federal government is in a tight fiscal environment, Freeland says ahead of health…