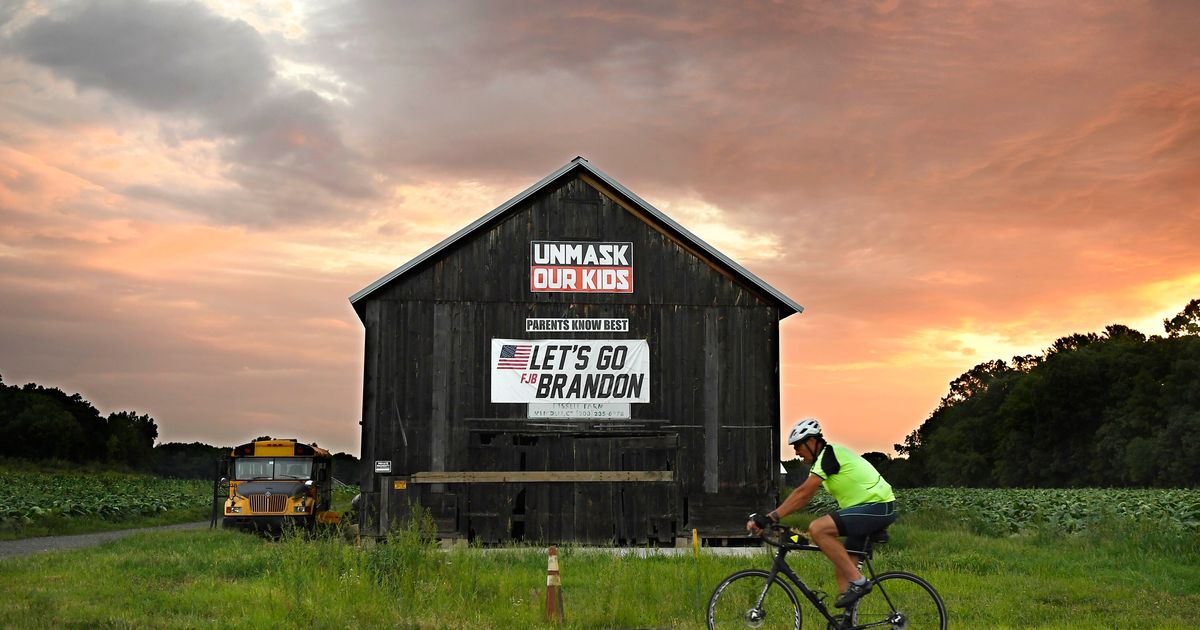 HARTFORD, Conn. (AP) — A former state legislator and a GOP fundraiser who received a late endorsement from former President Donald Trump were locked Tuesday in a tight primary contest for U.S. Senate that could signal where the state Republican party is headed politically after years of backing moderates.

Levy, a first-time candidate who loaned her campaign more than $1 million, touted her backing from Trump as proof she is a “true America-first patriot.” She and Lumaj, who ran an unsuccessful campaign for governor in 2018, each have argued that only a conservative can beat the incumbent Democrat, U.S. Sen. Richard Blumenthal, in the November election. Trump announced his support for Levy last week.

Levy appeared optimistic Tuesday night that she might upset Klarides, the endorsed Republican candidate, as she mingled with supporters at a party in Greenwich.

“I have to pinch myself. I feel like I’m living a dream,” she told WTNH-TV. “So far it’s looking good, that so many people around the state who have put their trust in me and their belief in me, that I will work for them and that I will go to Washington to make real changes that will make a difference to make their lives better.”

Newly appointed Secretary of the State Mark Kohler said the polls were “pretty quiet” for his first election, with only a handful of reports of some tabulating machines “sticking a little bit in the heat.” He said the procedure for such a situation is to put the ballots in a secure auxiliary bin and count them later.

Connecticut hasn’t elected a Republican to the U.S. Senate since Lowell P. Weicker Jr., who served from 1971 to 1989.

Art Shilosky, a Republican and former first selectman of Colchester, said he doesn’t believe that nominating a candidate endorsed by Trump would finally end that drought for the GOP. He also questioned whether Trump’s endorsement would help Levy.

“No, I don’t think that’s a good mix,” Shilosky said outside a polling place where he voted for Klarides. “I think the Republicans in the state of Connecticut are more moderate than he (Trump) is. He’s too far out. People don’t relate to that. I don’t.”

Klarides contends her legislative experience and moderate positions on issues like abortion can persuade Connecticut voters in the general election to oust Blumenthal, who has been in office since 2011. She’s focused heavily on economic issues, including inflation and gas prices.

Klarides received the party’s backing at a state convention in the spring. Lumaj and Levy are banking on their conservative message resonating with die-hard Republicans who tend to vote in the state’s low-turnout summer primary.

Voters on Tuesday also chose their candidates to replace longtime Secretary of the State Denise Merrill, a Democrat who resigned in June to care for her ailing husband.

In the Republican race, conservative Dominic Rapini, a sales executive for Apple and the party’s endorsed candidate, defeated state Rep. Terrie Wood, a Republican from Darien.

Rapini has called for tightening ID requirements and cleaning the state’s voter rolls. He says he is suspicious about voter fraud especially in the state’s largest city of Bridgeport where various state and local officials have been charged over the years with election fraud — from allegedly conspiring to fraudulently obtain public campaign funds, to allegedly falsifying voter registration applications and absentee ballots applications.

Rapini is a former board chairman of a group called Fight Voter Fraud Inc., which was founded by a woman who filed dozens of complaints in Connecticut about alleged voter fraud during the 2020 election. Around the time Rapini left the group, the State Election Enforcement Commission dismissed most of the complaints, calling the them a “waste of the limited investigatory resources of the Commission.”

On the Democratic side, State Rep. Stephanie Thomas of Norwalk defeated New Haven Health Director Maritza Bond. Each of them had pledged to oppose Republican attempts to tighten voting rules.

Thomas, who is Black, has said such restrictions hit close to home, considering her father grew up during the 1940s in Georgia and never really learned to read and her mother worked two jobs for most of her life and didn’t drive. It took an hour-long bus ride and a long walk along a highway to reach the nearest department of motor vehicles branch to register to vote.

“So when Republicans make it harder to vote, it’s folks like my mom they’re targeting,” she said in a recent commercial.

Democrats also voted to nominate Erick Russell, an attorney who specializes in municipal finances, to fill the job of state Treasurer, which is being vacated by Democrat Shawn Wooden. Russell was up against Dita Bhargava, the chief operating officer of a private investment fund, and Karen Dubois-Walton, who oversees New Haven’s Housing Authority.

Meanwhile, Republicans in the state’s 4th Congressional District will choose between the party-endorsed candidate, Darien First Selectman Jayme Stevenson and Michael Goldstein, a doctor and lawyer from Greenwich. The winner will challenge Democratic U.S. Rep. Jim Himes in November.