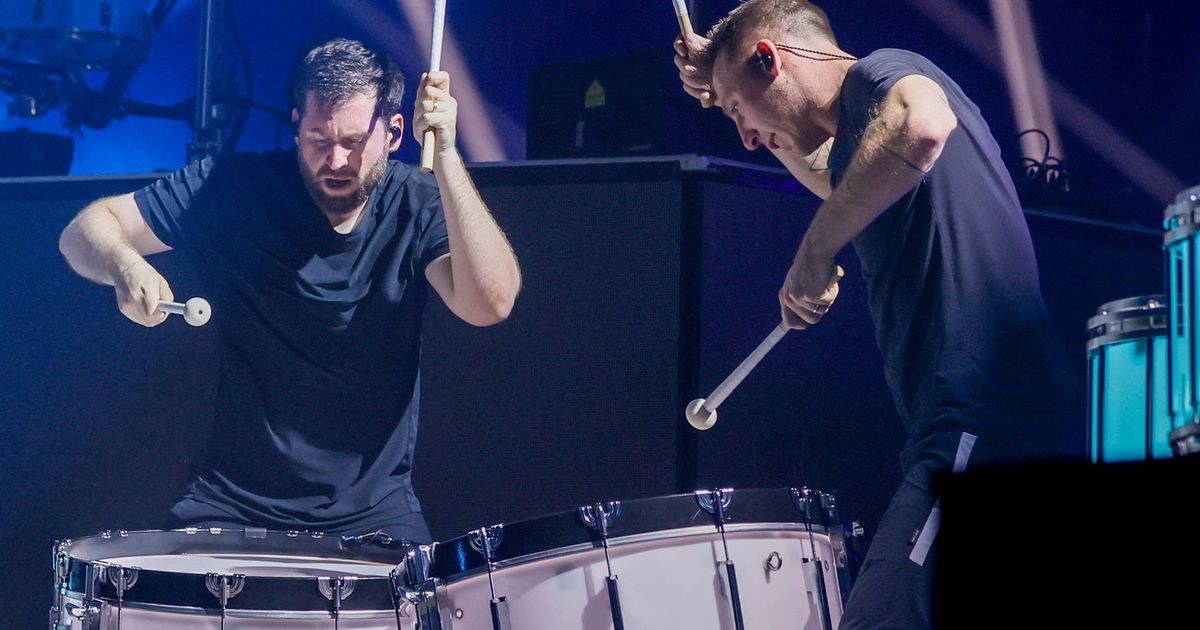 They said they wanted to dance.

Perched on towering twin pedestals overlooking a packed (and air-conditioned) Climate Pledge Arena on a sweltering evening, ODESZA’s Harrison Mills and Clayton Knight played one of their strongest cards early. As glistening electro-pop thumper “Say My Name” — one of the Seattle electronic stars’ biggest tracks — filled the concert hall that doubles as a hockey rink, the jubilant hometown crowd went wild, dancing like they saw a 70-degree day in the forecast.

Keeping everyone on their toes, about halfway through the song, Knight and Mills swerved into a sweaty house banger off their BRONSON side project (“Heart Attack”), at one point slowing it to a creepy crawl only to punch the accelerator twice as hard. We could have used a sheet of ice to cool down after that scorching run.

A week after releasing ODESZA’s first album in five years, the college buds who met in Bellingham settled into a three-night stand at the Pledge, kicking off an ambitious new tour that puts the local beat boys made good in elite Seattle company. The nearly sold-out shows mark the biggest hometown blowout since Pearl Jam’s Home Shows in 2018, recalling a certain thrift-shopping rapper’s run at the old KeyArena during peak Macklemania.

If ODESZA’s hard-to-define dance music was a little more mainstream — or if the bulk of their fans had as many gray hairs as I do — someone at City Hall might have thought to fly an ODESZA flag atop the Space Needle this weekend, or at least throw ’em one of those goofy proclamation days local politicos seem to love.

Municipal honors or no, ODESZA Weekend got off to a fast and fiery start Friday after opening sets from middleweight electro-pop favorites Sylvan Esso and ford., an up-and-coming producer affiliated with ODESZA’s Foreign Family Collective.

ODESZA’s fourth, and danciest, album “The Last Goodbye” was largely conceived during the pandemic when busting communal moves was still a no-no. Dance-floor yearnings seeped into their subconscious and new cuts like disco spinner “Forgive Me” and the prancing “Equal,” with its trance-like synths, kept the crowd moving. Indeed, much of the producer duo’s more cerebral, downtempo fare was shelved or scattered lightly as accent pieces throughout Friday’s set.

But more than a dance-floor reunion, ODESZA’s mesmerizing first show in three years felt like a get-your-popcorn, dig-your-nails-into-the-armrest summer blockbuster, with all the CGI firepower and suspenseful plot twists of a big-budget Hollywood flick. If anything could keep Friday’s show from a perfect five-star review, it’s that the 90-minute run time left us craving even more of the highly choreographed spectacle (can we get a director’s cut?).

As ODESZA has scaled up to larger venues, their over-the-top tour production has become a hallmark for the bar-raising live electronic act. And it ain’t cheap. Their deployment of a small army of musicians — a dramatic eight-piece drum line, trombone and trumpet players, plus three guest vocalists who grace some of ODESZA’s signature tunes — stands in defiance of mainstream dance music’s dude-with-a-laptop norm. Besides working their controllers, Mills and Knight crashed cymbals on pared down percussion setups, worked keyboards and jumped in with the drum line’s stark choreo.

The duo’s Last Goodbye Tour — its production overseen by fellow Western Washington University alums Luke Tanaka and Sean Kusanagi — has ODESZA at both its most muscular and craftiest. ODESZA’s performances have long contrasted with press-play EDM DJ sets and for the new tour, Knight and Mills have snipped, stitched and reconfigured songs old and new into 90 Frankenstein minutes of ODESZA choice cuts, creating an entirely new audio experience.

In one of Friday’s most arresting turns, soul-cleansing future bass oldie “Bloom” (or at least elements of it) was reworked into a war-drum-pounding, intergalactic battle cry with the brawny drum line smacking its snares as the track’s teardrop bass line came thumping in. It was a blow-your-hair-back moment on par with a blazing opening stretch that turned the stage into a fire-canon inferno as an epic “Behind the Sun” came marching in.

With their current tour, ODESZA is set to face some of the largest crowds of their career, cementing their place among Seattle’s top tier of musical exports. After Friday night’s audiovisual thriller, it’s easy to see why.

Fortnite challenges: Where to find a Marksman Rifle and The…