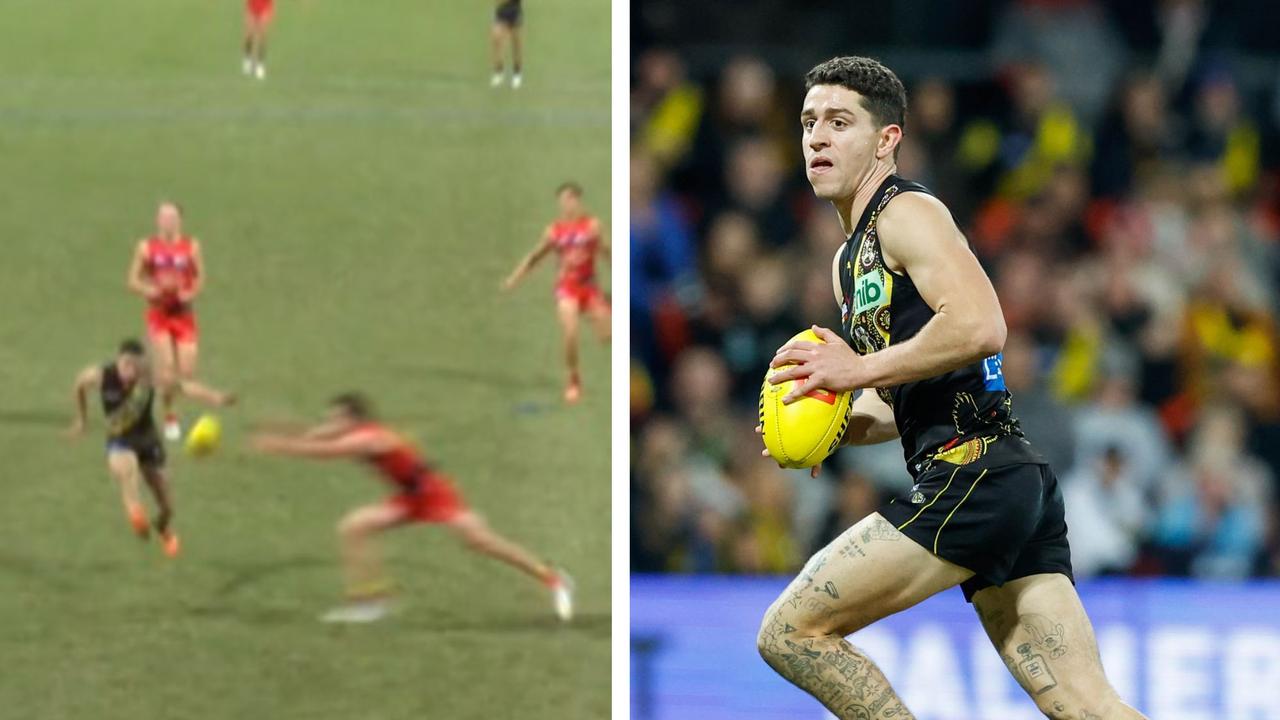 AFL greats have suggested the Richmond Tigers will need a reset after a scathing swipe at the club’s horrific implosion over the weekend.

Perhaps the most egregious moment came when 26-year-old forward Jason Castagna botched a goal with one defender in front of him.

Streaming into the 50 with Noah Cumberland in support, Castagna ran to just shy of the goalsquare before booting it — right at Charlie Ballard who flew across to save the goal.

“I was probably just head down and going as hard as I could,” Ballard said on Monday.

“I was doing what anyone would do in that situation. Even if I didn’t get there it was more the effort, but luckily I got there and it ended up being a great result for us.

The Suns then booted three goals in the last six minutes to seal the victory.

Anderson even said he had “turned my back on it” because he thought it was game over, but added it was “pretty inspiring” to spurn the Suns home.

But while the Suns enjoy the victory, Cornes has blasted Castagna for butchering the goal by not kicking earlier.

“This is rubbish from Castagna — either kick the goal or handball it,” Cornes said on Channel 9’s Footy Classified. “Either kick the goal prior to that, he’s lairising around goal and his set shot routine has become a bit of a meme. It’s a bit embarrassing how he goes about it.”

With just under four minutes to go and a nine-point lead, Jack Riewoldt went for a specky but landed heavily before appealing for a free kick.

Cornes blasted that moment as well.

“Look at the score, the lead with four minutes to go,” he said. “That’s rubbish from an experienced player who sooks to the umpire he should have got the free kick.

“How many times have we seen Jack Riewoldt sook at quarter time about not getting the free kick? So you wonder if the winning has papered over the cracks.”

Cornes then showed a graphic which had the Tigers last in free kicks against, 50m penalties and goals from 50m penalties in the AFL.

“You’re not going to ever finish up top one or two in that situation. He’s spoken about it before but nothing ever changes.”

Interestingly, the Tigers have been in the bottom half of the competition in free kicks against every season since 2013 and this is the fifth season Tigers given away the most free kicks. This includes 2017 and 2020, two of the three seasons the club won the flag. In 2019, the Tigers were the third worst team.

The Age’s Sam McClure said it was surprising the team being discussed was Richmond considering Damien Hardwick “is usually the guy that turns that stuff around”.

But Cornes argued that there had been “significant off field issues … over a number of years”, including during the 2020 biosecure bubble.

He continued to say it was a big moment for the Tigers as several older players appear to be heading for the door.

Earlier in the segment, Lloyd suggested Jack Riewoldt, Trent Cotchin and Shane Edwards won’t renew their contracts, with Cornes adding the trio may be joined in an exodus.

“I reckon they’re a big story if players like (Liam) Baker leave at the age of 24 and what happens with Dustin Martin, the three players Llordo mentioned and the players they have significantly injured like (Kane) Lambert,” he said.

“It’s a pivotal moment for the Tigers how they reset with the group and what they do at the end of the year.”