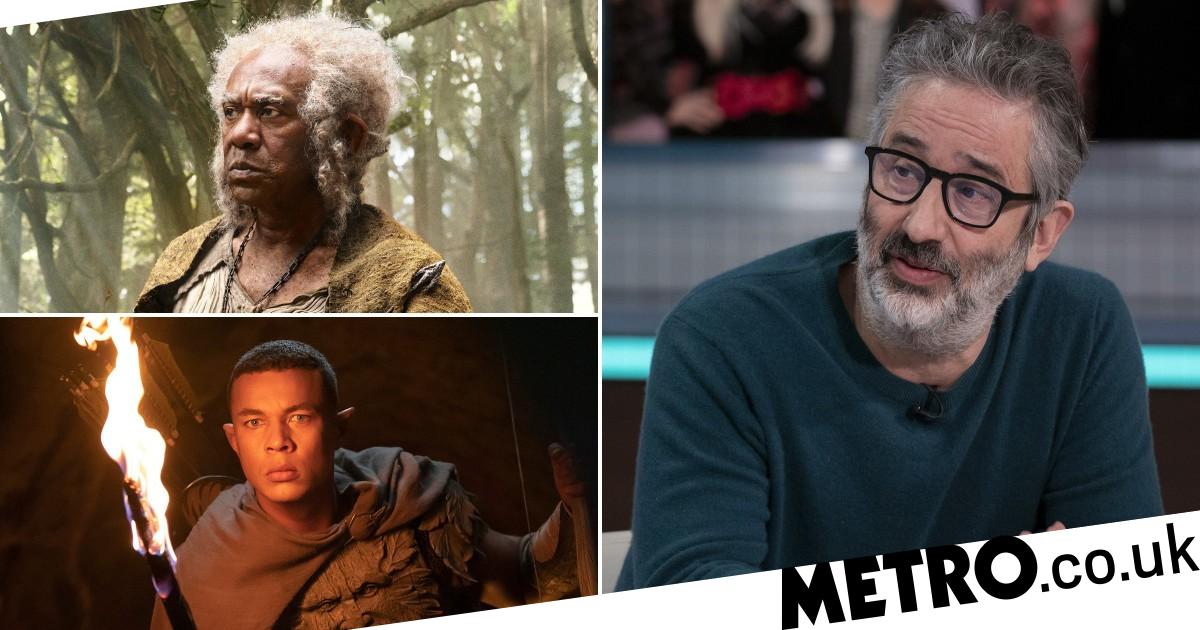 David Baddiel has blasted racist trolls targeting Black actors in the cast of The Lord of the Rings: The Rings of Power, dubbing them ‘mental’.

This week, following the launch of the prequel series on Prime Video, an official statement was released on the LOTR social media channels condemning anyone who has shared messages of racist, vitriolic abuse about the show’s diverse cast.

The statement called out the ‘relentless racism’ directed at Black members of the cast, while stars of the original films – including Elijah Wood, Sean Astin, Billy Boyd and Dominic Monaghan – united by wearing inclusive merchandise with the message ‘You are all welcome here’ written in Elvish.

Comedian Baddiel has said that in his opinion, those who are complaining about the fact that an elf in The Rings of Power is Black are ‘f**king mental’, while admitting he’s not a fan of the fantasy genre.

Continuing in a follow-up tweet, he said: ‘I speak as someone who has never liked The Lord of the Rings I’m afraid, because I’m not really a massive fan of fantasy. But I do know that in a fantasy, anyone can be anything, so complaining that an elf is black is…sorry to use it again…f**king mental.’

Baddiel shared his assumption that the people being online racist abuse are ‘white fans’ who don’t want their ‘ownership’ of the story they follow to be ‘challenged’.

‘I think as well that fandom obviously is a space where (projected) ownership of the story is obsessive, so I assume these are white fans who feel somehow that their ownership is being challenged by everyone in it not looking exactly like them,’ he wrote.

Ismael Cruz Córdova, who became the first person of colour to play an elf in the Lord of the Rings franchise, having portrayed Silvan Elf Arondir in Rings of Power, recently spoke out about the ‘pure and vicious hate speech’ he has experienced over the past couple of years.

‘I fought so hard for this role for this very reason,’ he told Esquire.

‘I felt that I could carry that torch. I made sure that my elf was the most Elven, the most incredible, because I knew this was coming.’

Sir Lenny Henry, who stars in the series as a Harfoot named Sadoc Burrows, also told GQ Magazine: ‘They have no trouble believing in a dragon, but they do have trouble believing that a Black person could be a member of the court. Or that a Black person could be a hobbit or an elf. And actually, storytellers can do what they want, because they’re storytellers.’

The Lord of the Rings: The Rings of Power is available to watch on Prime Video.


MORE : Elijah Wood and Lord of the Rings cast reunite to support diversity in Rings of Power after vile racist backlash: ‘You are all welcome here’


MORE : Whoopi Goldberg tells racist fans of Lord of the Rings: The Rings of Power and House of the Dragon to ‘get a job’

Setting up a home office and keeping it cool