Rivals vying to replace Boris Johnson as Britain’s PM are diverse in background, not plans 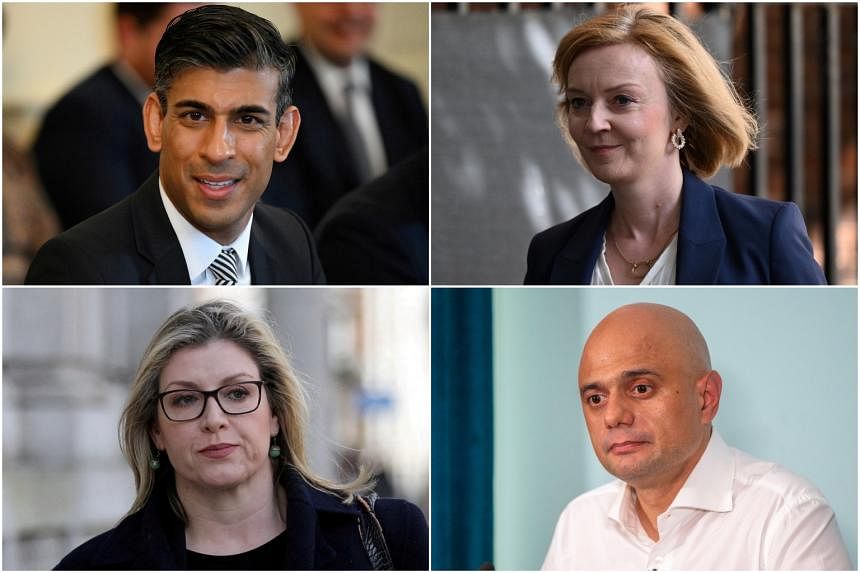 LONDON (NYTIMES) – Four are women. Six have recent forebears hailing from far beyond Europe – India, Iraq, Kenya, Mauritius, Nigeria and Pakistan. Of the three white men, one is married to a Chinese woman while another holds a French passport.

On paper, the nearly dozen candidates vying to replace Boris Johnson as Conservative Party leader and prime minister are a kaleidoscopic tribute to Britain’s rich diversity. In terms of policy proposals, however, the mosaic they create is resolutely monochromatic.

Nearly all the candidates are promising to cut taxes of one sort or another to cushion the blow of a spiralling cost-of-living crisis. Most favour legislation that reneges on an agreement with the European Union on trade in Northern Ireland. Many would continue to put migrants in the country illegally on planes to Rwanda.

The degree of continuity and uniformity is especially striking, given that the candidates are competing to replace a prime minister who was criticised for lurching wildly from crisis to crisis, running a government that is, by all accounts, drifting in the face of grave economic stress and deepening tensions with Brussels. Several had sat in the Cabinet that raised the taxes they now want to cut.

“There’s just a bizarre disconnect from reality on the part of all of them,” said Professor Jonathan Portes, who teaches economics and public policy at Kings College London. “They’re just off in this fantasy land, talking about tax cuts.”

What they should be talking about, Prof Portes said, is how Britain is going to avert a full-blown crisis in its schools and hospitals in a few months, when surging inflation and budget cuts will hit teachers and nurses, prompting some to quit their jobs and others to strike. Tax cuts will not solve the cost-of-living squeeze, he said, but they will stoke inflation and deplete Britain’s already shaky public finances.

To some extent, the untethered nature of the debate is a result of the size of the field, which leaves lots of people jockeying to break through. That will change quickly under new elections rules adopted on Monday (July 11) evening by an influential committee of backbenchers in the Conservative Party, which oversees the leadership contest.

Under the rules, Conservative Party lawmakers will whittle down the list of contenders in successive rounds of voting, starting Wednesday, with the support of 20 lawmakers needed to run in that first contest, and ending next week with a shortlist of two. One candidate will emerge victorious from a ballot of Conservative Party members by Sept 5 and succeed Mr Johnson as prime minister. In theory, a two-person race will sharpen the debate and surface more difficult issues.

But the uniformly right-leaning nature of the candidates’ proposals also reflects the Conservative Party electorate. The party’s centre of gravity has tilted to the right during its bitter battles over Brexit. Mr Johnson purged more centrist lawmakers, like former Cabinet minister Rory Stewart.

The party’s rank-and-file membership, which is largely made up of activists, also tends to be more right-wing than average voters (there were 160,000 eligible members during the last leader election in 2019, according to the party). The members may have swung even more right in recent months as the party lost popularity under the scandal-scarred Mr Johnson, and less committed members drifted away.

Still, the multistage nature of the contest, some analysts said, could be a trap for the tax-cutting evangelists. While most Tory members of Parliament are attracted to lower taxes, party members were likely to be less positive, because they tend to be older and have more experience with publicly funded services.

For them, tax cuts financed by cuts to health care or other public programs might not be an attractive proposition. Some candidates are emphasising tax cuts in the first phase of the contest to differentiate themselves from the early front-runner, Mr Rishi Sunak, whose resignation as chancellor of the exchequer last week helped set in motion the events that brought down Mr Johnson.

Mr Sunak, presenting himself as a fiscal hawk, suggested in his introductory campaign video that his rivals are telling “comforting fairy tales”.