African central banks are escalating their fight against blistering inflation and currency weakness, with four out of six monetary policy committees likely to raise interest rates in the next two weeks.

The banks’ deliberations will probably continue to center around surging food, fertiliser and energy costs stemming from supply shortages caused by Russia’s war with Ukraine. The ongoing economic impact of the coronavirus pandemic, risks posed by a slowdown in China’s economy, expectations of more aggressive rate hikes by the Federal Reserve and fears of a global recession that’s increased investor appetite for dollars and led to a sell-off of African debt will also feature in their discussions.

Countries like South Africa and Kenya, which are more connected to global markets through asset flows, are poised to raise borrowing costs. Policy makers in Angola, one of the few global outliers with slowing inflation, are expected to leave the key rate unchanged.

Here’s what central bankers may do: Since the Central Bank of Nigeria’s last MPC meeting, the inflation rate rose more than expected. It’s likely to remain elevated because of higher diesel costs and persistent shortages of gasoline and forex, said Oyinkansola Samuel, an analyst at FirstRand Ltd.’s unit RMB Nigeria Ltd. That may strengthen the MPC’s resolve to raise the key interest rate for a second straight meeting.

“It is not unlikely that we may see a 25 to 50 basis-point hike,” Samuel said. RMB sees the benchmark rate at 14% by year-end, she said. Of the seven economists in a Bloomberg survey, four predict a rate hike. After breaching the ceiling of the Reserve Bank’s target range for the first time in more than five years, inflation is set to accelerate to levels last seen during the global financial crisis that sent the rand into a tailspin. While the MPC prefers to anchor inflation expectations close to 4.5%, heightened risks to economic growth — including flood damage in the province that’s the second-biggest contributor to gross domestic product and deeper, more frequent rolling blackouts — will also influence decision-making.

Different data points that support cases for dovish and hawkish stances mean “there’ll likely be a diversity of views on the MPC and therefore there’s room for surprises,” said Peter Worthington, a senior economist at Absa Bank Ltd. It may also mark the fifth straight meeting with split votes among the five-member panel.

Of 20 economists in a Bloomberg survey, 13 including Worthington predict a second consecutive half-point increase, with the rest expecting a bigger 75 basis-point hike. Investors have fully priced in a half-percentage point move, but see a chance of a bigger increase. After the Bank of Ghana raised its key rate by 450 basis points this year, Africa’s second-most aggressive central bank, after Zimbabwe, will probably pause its hiking cycle.

While the inflation rate remains well above the upper limit of the central bank’s target, it increased at a slower pace in June. That and an economy that significantly underperformed expectations in the first quarter and is facing more headwinds, gives the MPC a strong reason to leave the policy rate unchanged, said Courage Martey, an economist at Accra’s Databank Group.

Deteriorating economic conditions exacerbated by the war in Ukraine and US monetary tightening persuaded the government to approach the International Monetary Fund for a bailout this month. 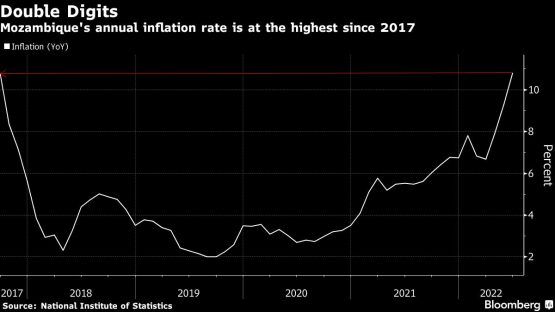 Banco de Mocambique will probably raise its benchmark rate to temper inflation that’s above 10% for the first time in almost five years. Soaring prices have fomented protests and a pledge from the World Bank to subsidize public transport users.

Annual inflation is expected to quicken to about 12% in the third quarter because of higher food and transport prices, said Ridle Markus, a strategist at Absa Bank Ltd. “Hence, we expect at least another 75 basis-point hike in the policy rate at the July meeting.” That would be the second increase this year, after a 200 basis-point hike in March. 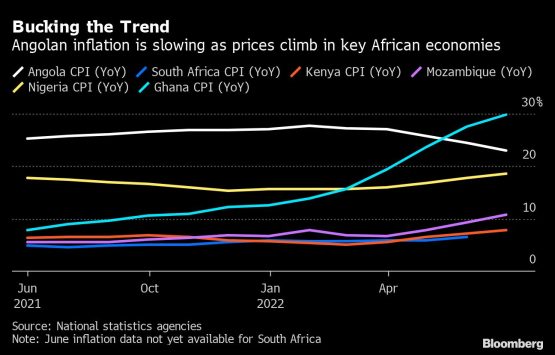 The central bank of Africa’s second-biggest oil producer is likely to leave its key rate unchanged for a sixth straight meeting to see if the downward trend in inflation continues, Wilson Chimoco, an economist at the Catholic University of Angola said.

A steady kwanza against the dollar buoyed by high oil prices and credit-rating upgrades have helped keep annual inflation, which in June slowed at its fastest pace this year, in check.

My epiphany has me wondering what is wrong with me

Regardless of headwinds, Aavas has managed to navigate housing finance market. Can momentum maintain?