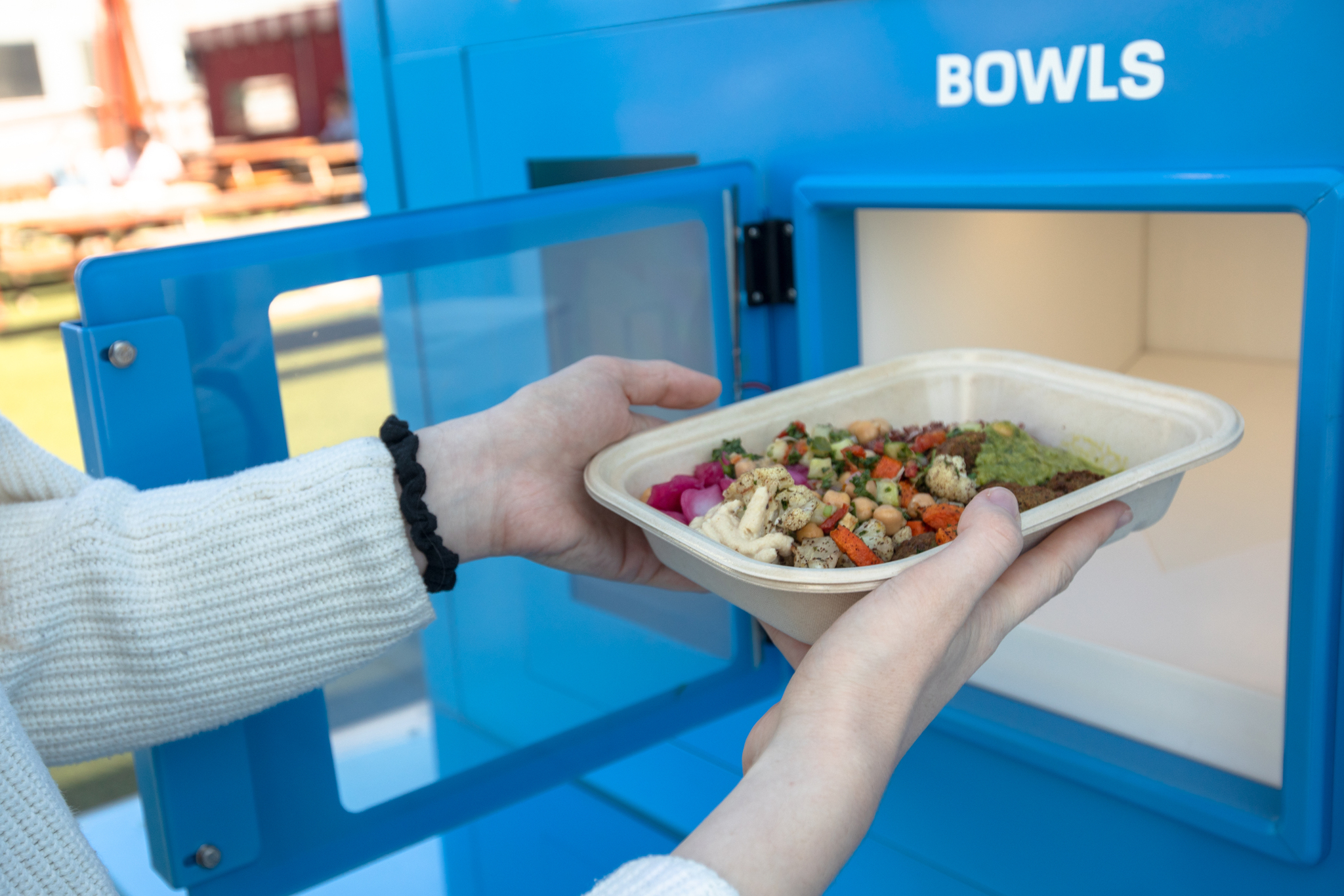 Just before the Friday lunch rush at Spark Social, people peered curiously at a mysterious new arrival. The big blue-and-white shipping container parked in the artificial turf at the Mission Bay food truck park looked like something from another planet.

The container had no windows, and not a human was in sight. Only a big sign reading “Mezli,” and a few computers urging, “order here.”

But this was no alien invasion. Mezli, the brainchild of three Stanford engineers, claims to be ​​the first fully autonomous restaurant in San Francisco.

Of course, San Francisco is no stranger to robots at restaurants. I’m personally familiar with both coffee robot Cafe X and the ROBOJuice smoothie-making robot at the San Francisco Metreon. But neither offer a full meal — and full-service restaurants that do employ robots tend to still need humans to fulfill some tasks, such as taking orders.

Mezli also isn’t quite fully autonomous. Real humans do the prep work for the Mediterranean menu (created by chef Eric Minnich of Michelin-starred Madera in Menlo Park) in a central kitchen offsite.

It’s also more of a vending machine than it is a full-service restaurant — robots aren’t waiting tables. But from the moment you place your order to the moment a piping hot bowl is in your hands, the robots are in charge.

Co-founders Alex Kolchinski, Alex Gruebele and Max Perham came up with the idea for Mezli while they were studying at Stanford.

“It was kind of a personal thing for us,” Kolchinski said. “We wanted better quality food at a better price than we could get from places like the dining halls or Chipotle.”

The trio did a little digging into what makes restaurant food so expensive and realized that if they automated the food service steps on site, they could afford to sell healthy food at very low prices. And Mezli prices are indeed quite low for San Francisco — a roasted carrot and cauliflower bowl is just $6.99.

One of the most expensive items on the menu, a shredded spiced lamb and tzatziki bowl, is still only $10.99 (a lamb shawarma plate at nearby human-run restaurant Oasis Grill costs $17.99 — granted, it appears to be a larger portion).

“We’re about 10 or 15% cheaper than local Chipotles right now in a similar part of the city, and we think we can actually get even lower than that with scale,” said Kolchinski.

That’s for two reasons: The shipping container is a lot cheaper than a full brick-and-mortar restaurant; and they keep labor costs down by employing the robot to heat up and plate the food.

With Mezli having just opened to the public on Aug. 28, I stopped by the food truck park to see it myself. As I approached the computer labeled “order here,” a Mezli engineer immediately jumped to my aid.

It wasn’t that the ordering system was difficult to operate — in fact, it was quite intuitive. But engineer Tom Nilsson explained that Mezli was so new that they hadn’t yet secured the proper permit to operate autonomously as a vending machine. Therefore, each order needed an employee to type in a code to approve it.

Even once they’ve secured the proper permitting, though, human Mezli employees will stick around on site for a while to make sure everything’s running smoothly.

“Most of what we do actually is explaining to people what’s going on here and seeing if they have any trouble with the process — basically being good faces of the business,” Kolchinski explained. “But we do also keep an eye on what’s going on inside the robot.”

I made my lunch selection: a falafel bowl with cauliflower and carrots with sumac, falafel, red rice, Israeli salad with chickpeas, pickled red onion, hummus and green goddess sauce ($8.49). At checkout, there’s an option to tip, but Kolchinski clarified that that money goes to the human team, not the robot.

For now, the menu offers just five bowls as well as the option to build your own customized bowl. In the near future, though, they plan to offer sides and drinks, from pita chips and tahini cookies to seltzers — and eventually, a whole other menu.

“We very much do want to scale around the country and maybe even around the world, and be serving a whole variety of menus, so that people don’t just have to eat Mediterranean when they want healthy, convenient, affordable food,” said Kolchinski.

I scanned a QR code to track my order, which informed me it would be ready in six minutes. Once I got the notification that it was ready, I walked to the other side of the kiosk.

Here, a screen displayed my name, which I tapped to unlock my order. An opaque cubby labeled “bowls” slowly turned transparent, revealing my bowl inside. I pulled open the door and took my order back to a sunny picnic table.

The bowl was visually appealing enough, with a rainbow of colors from pink to green setting off the “healthy” sensors in my brain. Every element was seasoned well, with the acidic pickled onions providing a welcome contrast to the other ingredients. I enjoyed the green goddess sauce, although its flavor profile was more similar to a zingy chermoula or zhug than it was to the traditionally more creamy goddess sauce. I also found the falafel to be a little dry, and yearned for more hummus.

Still, though, it was quite decent for a filling, healthy lunch under $10 in San Francisco. With inflation on a meteoric rise as of late, the price alone feels like a miracle.

While Mezli had been pretty quiet when I first arrived, by the time I finished my bowl, more people were stopping to gawk (and order) at the robot restaurant. If I had to gripe about one thing, it’s that I couldn’t see the robot. It seems like a missed opportunity, it being completely hidden from view, without so much as a window to reveal its inner workings (apparently for patenting reasons).

Humans are fascinated by robots, especially robots attempting to do human things. I could sit and watch the ROBOjuice robot at the Metreon make smoothies for hours, and I’m sure far more people would be drawn to Mezli if they could see what was going on inside.

But for a meal this cheap, I’ll get over not being able to watch a free robot show with my falafel.

Abe Hamadeh Calls for Ethics Investigation into the…