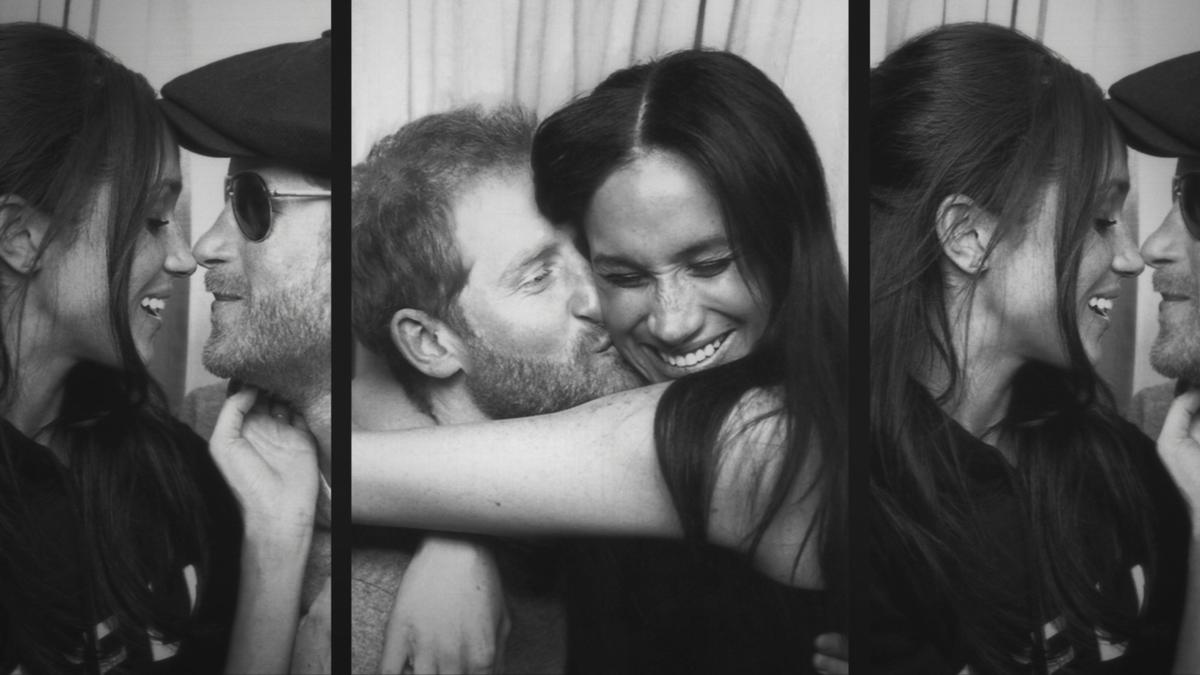 Harry and Meghan’s new Netflix documentary is being seen as a ‘declaration of war’ by the royals, sources say.

A promotional trailer, which was posted online on the second day of the Prince and Princess of Wales’ high-profile visit to the US, dispelled any hopes that the Sussexes are declaring a ceasefire in their acrimonious battle with the royal family.

As well as including dozens of supposedly private pictures from their family album, the footage includes a voiceover from Harry saying gravely, ‘no-one sees what’s happening behind closed doors’ over a black and white picture of his wife on an armchair, apparently crying.

The film then immediately cuts away to a shot focusing on a pinched-looking William and Kate at the 2019 Commonwealth Service in London, with the Sussexes sitting meekly behind them.

“I don’t see how anyone could view it as anything other than a declaration of war,” said one.

The minute-long Netflix teaser strongly suggests the Sussexes will confront rumours about their tempestuous relationships with senior royals head-on.

In a deliberately tantalising remark to a producer off-screen, Meghan says in the clip: “When the stakes are this high, doesn’t it make more sense to hear our story from us?”

Royal insiders reacted with horror and an increasing sense of anger yesterday as the trailer was released on social media ahead of the documentary being broadcast on Netflix next week as part of the Sussexes’ multi-million dollar deal with the streaming giant.

There was also disappointment that it had been released to coincide with William and Kate’s trip to the US, their first visit to the country since 2014, during which the prince is hosting his major environmental project, the Earthshot Prize.

While it is unlikely that the duke and duchess had much say on the trailer’s release date, the glee with which their supporters and publicists were treating it spoke volumes.

The Sussexes’ biographer, Omid Scobie, directly referred to the fact that Earthshot is so significant to William that it is being billed as his ‘Super Bowl moment’ .

He crowed on Twitter: “If tomorrow is Prince William’s Super Bowl – then here’s your half-time show”.

The trailer has coincided with a string of PR announcements by the Sussexes, including an appearance by Meghan at a women’s dinner in Indiana and the announcement of a charity donation of handbags she has facilitated.

“One can only conclude this is a concerted publicity drive on their behalf to stoke up interest in this documentary and is designed to clash with the Wales’ visit this week,” said another well-placed source.

“The prince and princess’s high-profile trip to the States to shine a light on community projects in Boston and the environmental crisis is being apparently used as a platform for the Sussexes to create the drama and attention they so clearly crave on a personal level, as well as content for the multi-million dollar deal they have signed since quitting as working royals.

“While the Waleses will carry on with their duties, Team Sussex appears determined to remind America of their own ‘compassionate activism’ – one lucrative contract at a time.”

The minute-long clip was viewed more than 300,000 times within an hour of being uploaded to Netflix’s Twitter account on Thursday.

It features an assortment of private and public photographs, charting every stage of Harry and Meghan’s lives from birth to parenthood, set to a melancholic soundtrack.

Images include snapshots of the Sussexes’ life together, such as embracing in a photobooth, a selfie of the pair in casual dress smiling, Meghan’s pregnancy, and of Harry serenading his wife with an acoustic guitar.

There is also a shot of the Sussexes in their kitchen at Frogmore Cottage on the night of their penultimate engagement as royals in 2020, when they attended a remembrance event at the Royal Albert Hall.

It shows Harry, casual in braces after taking off his uniform jacket, and Meghan having removed her cape kissing on their island unit.

It appears to have been taken by a professional photographer.

Sources have said the couple often secretly employed their own photographer, Chris Allerton, even when they were working royals.

The photograph of the estranged Cambridges – as they then were – and Sussexes sitting one row apart at the 2019 Commonwealth Service at Westminster Abbey is also a controversial choice.

At the time the Fab Four, as they were known, were already on the rocks and steps were being taken to break up their joint household and charitable foundation.

With Meghan apparently gazing wistfully into the distance and Kate seemingly scowling at the camera, one insider remarked: “It’s as if someone scoured the Earth for the only unflattering picture of the Princess of Wales in existence”.

The Netflix series refers to the couple just by their first names – ‘Harry & Meghan’ – which has prompted some commentary in royal circles about their parallels with the infamous reality family the Kardashians.

“It’s hard not to make the comparison, really”, one insider said wryly.

Others pointed out that Meghan appeared to have “got her excuses in already” in an interview with Variety Magazine in October.

In it she said of the documentary’s director Liz Garbus: “It’s nice to be able to trust someone with our story – a seasoned director whose work I’ve long admired – even if it means it may not be the way we would have told it”.

One source described it as “classic deflection”, adding: “She’s already saying it wouldn’t have been her choice to do it like this but they needed it to be ‘authentic’. No-one is fooled.”

In another clip included in the trailer, Harry says: “I had to do everything I could to protect my family”, accompanied by a compilation of scenes from the printing presses, folded newspapers, and banks of photographers.

This is thought to be a hint that the prince, 38, will renew his criticism of the media.

The series is reported to be airing on December 8, exactly three months after the death of Harry’s grandmother, Queen Elizabeth. Netflix said the show “explores the clandestine days of their early courtship and the challenges that led to them feeling forced to step back from their full-time roles in the institution”.

It features commentary from friends and family, most of whom have never spoken publicly before about what they witnessed, according to Netflix, and historians who discuss the state of the British Commonwealth today and the Royal Family’s relationship with the Press.

It adds: “The series does more than illuminate one couple’s love story, it paints a picture of our world and how we treat each other”.

Royal sources have said the Prince and Princess of Wales are determined “not to be distracted by other things this week” and their focus is on meeting communities and local people across Boston during their US trip.

Climate bell tolls for banks as investors turn up the heat