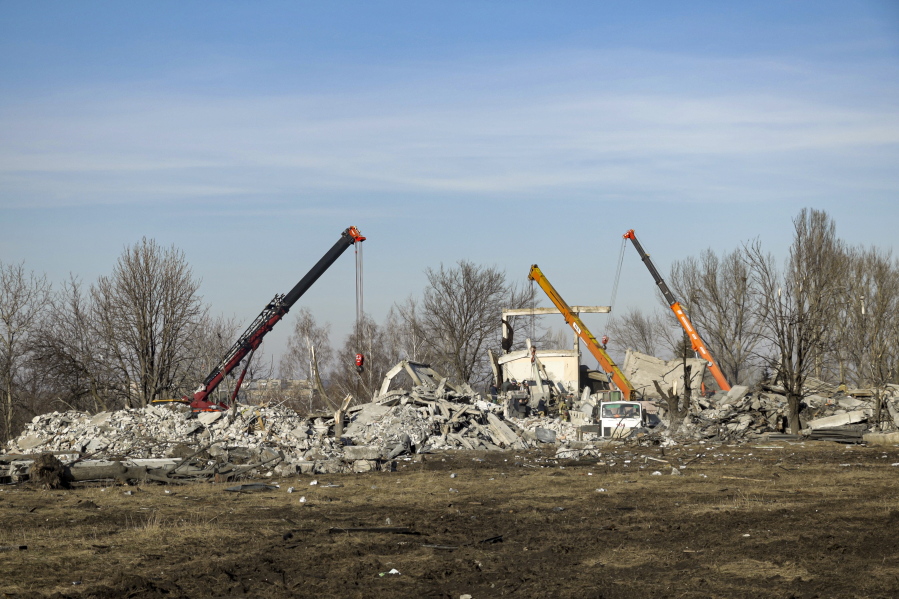 KYIV, Ukraine (AP) — Emergency crews on Tuesday sifted through the rubble of a building struck by Ukrainian rockets, killing at least 63 Russian soldiers barracked there in the latest blow to the Kremlin’s war strategy as Ukraine says Moscow’s tactics could be shifting.

An Associated Press video of the scene in Makiivka, a town in the partially Russian-occupied eastern Donetsk region, showed five cranes and emergency workers removing big chunks of concrete under a clear blue sky.

In the attack, which apparently happened last weekend, Ukrainian forces fired rockets from a U.S.-provided HIMARS multiple launch system, according to a Russian Defense Ministry statement.

It was one of the deadliest attacks on the Kremlin’s forces since the war began more than 10 months ago and an embarrassment that stirred renewed criticism inside Russia of the way the war is being conducted.

The Russian statement Monday about the attack provided few other details. Other, unconfirmed reports put the death toll much higher.

The Strategic Communications Directorate of Ukraine’s armed forces claimed Sunday that around 400 mobilized Russian soldiers were killed in a vocational school building in Makiivka and about 300 more were wounded. That claim couldn’t be independently verified. The Russian statement said the strike occurred “in the area of Makiivka” and didn’t mention the vocational school.

Satellite photos analyzed by The AP show the apparent aftermath of the strike. An image from Dec. 20 showed the building standing. An image from Jan. 2 showed it reduced to rubble. Other days had intense cloud cover, making seeing the site by standard satellite imagery impossible.

In Samara, in southwestern Russia, locals gathered for an Orthodox service in memory of the dead. The service was followed by a minute’s silence, and flowers were laid at a Soviet-era war memorial, RIA reported.

Unconfirmed reports in Russian-language media said the victims were mobilized reservists from the region.

With the fighting raging much longer than anticipated by the Kremlin, and becoming bogged down in a war of attrition amid a Ukrainian counteroffensive backed by Western-supplied weapon s, Russian President Vladimir Putin is mulling ways of regaining momentum.

His plan, according to Ukrainian officials, includes stepping up bombardments of Ukraine territory with Iranian-made exploding drones.

“We have information that Russia is planning a prolonged attack by Shaheds (exploding drones),” Ukrainian President Volodymyr Zelenskyy said in his nightly video address late Monday.

He said the goal is to break Ukraine’s resistance by “exhausting our people, (our) air defense, our energy,” more than 10 months after Russia invaded its neighbor.

For the Russian military, the exploding drones are a cheap weapon which also spreads fear among Ukrainian troops and civilians. The United States and its allies have sparred with Iran over Tehran’s role in allegedly supplying Moscow with the drones.

The Institute for the Study of War said that Putin is striving to strengthen support for his strategy among key voices in Russia.

“Such profound military failures will continue to complicate Putin’s efforts to appease the Russian pro-war community and retain the dominant narrative in the domestic information space,” it added.

Putin’s additional reliance on drones might not help him achieve his goals, however, as Ukraine claims a high success rate against the weapons. Even so, part of the intention using drones is to exhaust Ukrainian air defenses.

During the first two days of the new year, which were marked by relentless nighttime drone attacks on Ukrainian cities and energy infrastructure, the country’s forces shot down more than 80 Iranian-made drones, Zelenskyy said.

As well as seeking to wear down resistance to Russia’s invasion, the long-range bombardments have targeted the power grid to leave civilians at the mercy of biting winter weather as power outages ripple across the country.

In the latest fighting, a Russian missile strike overnight on the city of Druzhkivka in the Donetsk region wounded two people, the deputy head of Ukraine’s presidential office, Kyrylo Tymoshenko, reported Tuesday.

The Russian military on Tuesday acknowledged carrying out strikes on Druzhkivka and Kramatorsk, also in Donetsk. The Defense Ministry claimed it destroyed four HIMARS launchers in the area. This claim could not be independently verified.

A reporter with French broadcaster TF1 was live on television screens when a blast from one of the strikes erupted behind him in Druzhkivka. A German reporter with Bild newspaper suffered a minor injury from shrapnel in the same bombardment.

Officials said the attack ruined an ice hockey arena described as the largest hockey and figure skating school in Ukraine.

He also reported that two people were killed in the Kherson region Tuesday after driving over a mine left by withdrawing Russian troops.

Also, one civilian was killed and two others wounded on Tuesday morning as Russian forces shelled the city of Kurakhove in the eastern Donetsk region, hitting a residential area, local Gov. Pavlo Kyrylenko reported.