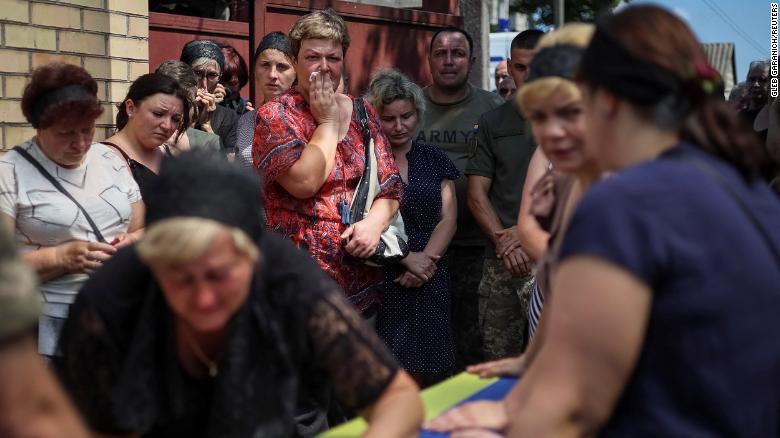 Russian Defense Minister Sergei Shoigu reported to President Vladimir Putin that the military had taken over Lysychansk and a number of nearby settlements on Sunday, according to the country’s Ministry of Defense.
Luhansk is one of the two regions that form Donbas, the eastern part of Ukraine where the conflict between Ukraine and Russian-backed separatists started in 2014. The area has became the key centerpiece of Putin’s military ambition in Ukraine after his troops failed to take over Kyiv earlier this year.

The fall of Lysychansk would shift Russia closer to achieving the goal of taking over Donbas.

However, the Ukrainian military insisted earlier on Sunday that it was still in control of the city — although it admitted the Russian forces were closing in. Serhiy Hayday, the head of the Luhansk region military administration, said that while Russian forces were suffering losses, they were “stubbornly advancing” in Lysychansk.

“The Russians are entrenched in the Lysychansk district, the city is on fire. The occupiers probably deployed all their forces at Lysychansk. They attacked the city with inexplicably brutal tactics,” Hayday said Sunday.

Pro-Russia separatists in the area have already claimed a victory in the battle over Lysychansk. The People’s Militia of the self-declared Russian-backed Luhansk People’s Republic (LPR) claimed Saturday that Lysychansk was encircled by Russian forces.

Andrei Marochko, an officer of the LPR militia said the city was being “cleared of Ukrainian nationalists” and said “victory flags have already been installed” near Lysychansk.

Video shared by Russian state news outlet Ria Novosti on Saturday purports to show residents installing he old Soviet Union flag at the Memorial to the Memory of the Fallen in Lysychansk.

The Institute for the Study of War said Russia will likely establish control over the remaining territory of Luhansk region in coming days. After that, the institute said in its latest update, Russian troops will likely focus on Ukrainian positions in Siversk, west of Lysychansk, before turning inland to Slovyansk and Bakhmut.

The Donetsk region military administration said Sunday that Russian forces continued shelling Slovyansk and Bakhmut, and that at least six people were killed in attacks during the night.

Ukrainian President Volodymyr Zelensky said the cities of the Luhansk region were “the epicenter” of the hostilities. In his nightly address on Saturday, Zelensky acknowledged that more than 2,600 Ukrainian cities and towns were under Russian control.

“The Russian army continued to fire missiles at our cities,” Zelensky said, urging people to “help the army, help volunteers, help everyone who was left alone at this time” and to use their contacts to “spread the truth about the war and about the crimes of the occupiers on our land.”

Melitopol fell to Russian control in early March, weeks into the Kremlin’s invasion of Ukraine.
According to Fedorov, Ukrainian troops filed “more than 30 shots exclusively at the military base,” rendering it “unable to function.”

“Now the whole city is covered in smoke. This has been going on for three to four hours. Warehouses on the territory of the transport aviation base are burning,” Fedorov added.

The head of the Russia-installed council in the Zaporizhzhia region, Evgeny Balitsky, said in a Telegram post Sunday that “shells fell on the territory on the airfield” and that “there were no casualties.”

Russian state news agency RIA Novosti also confirmed the attack, reporting that Ukraine had hit the Aviagorodok area of Melitopol, but did not specify what had been targeted.

An empire state of mind: The science behind what makes patriots susceptible to becoming nationalists