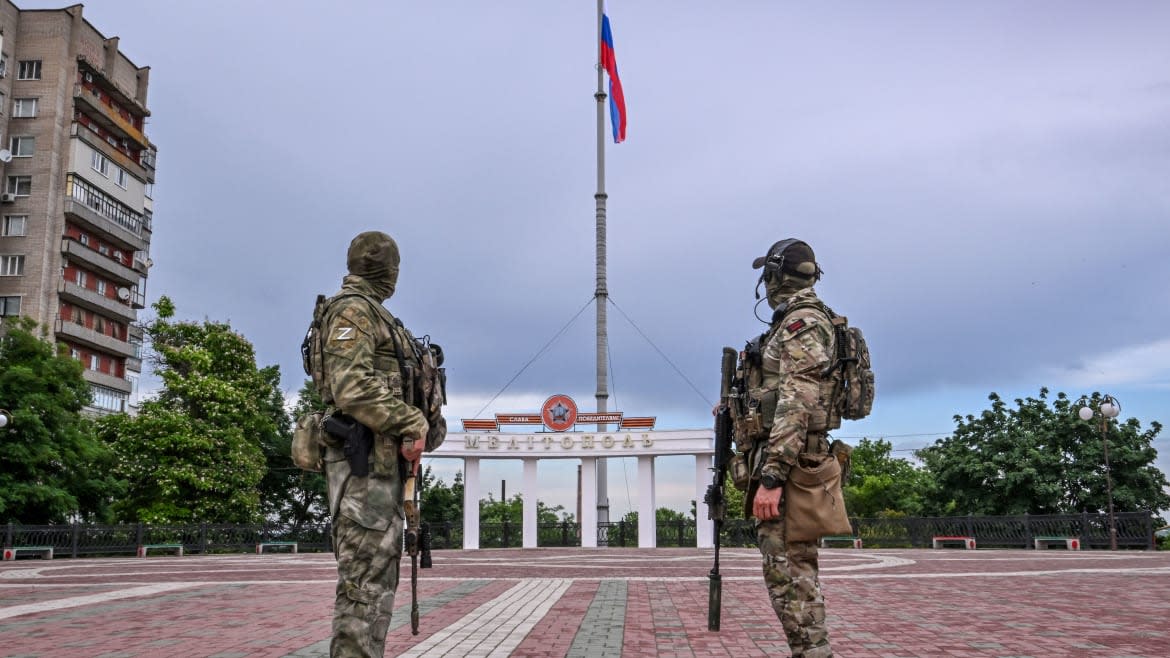 The headquarters of a Russian group urging Ukrainian citizens to ditch Kyiv and join Moscow has been blown up in Russian-controlled Melitopol.

Vladimir Rogov, one of the Russian proxy leaders in the Zaporizhzhia region, announced the news on Telegram, blaming “Ukrainian terrorists” for destroying the offices of a group called “We Are Together With Russia.”

The group, established after Russian forces took over the city in early March, was controlled by Vladimir Putin’s United Russia party and tasked with preparing Ukrainian citizens for a “referendum” to officially make the area part of Russia.

“Another step further from the pseudo-referendum,” the city’s Ukrainian mayor, Ivan Fedorov, wrote mockingly on Telegram in response to the news.

No fatalities or injuries were reported in the blast, which comes as attempted assassinations of Russian-backed leaders in the occupied territories have become an almost weekly occurrence. At least nine attempted assassinations were reported in August as Russian authorities move to strengthen their grip on the seized Ukrainian territories by encouraging locals to vote in the upcoming “referendums.”

At least 19 attempted assassinations of Russian-appointed figures have been reported since the full-scale invasion was launched on Feb. 24, according to a volunteer group monitoring the attacks.

Fedorov, in an interview with Ukrainska Pravda published Thursday, said hundreds of Ukrainian partisans are working with Ukraine’s military to thwart Russia’s control of the city with various acts of sabotage.

“[The Russians] wanted to be greeted with bread and salt and ‘Hello!’ but instead they were told, ‘Good evening, we are from Ukraine,’” Fedorov said.

Ukrainian partisans have also reportedly been active in other areas Russia is said to be seeking to annex, including Mariupol and Kherson, where Russian-appointed officials have been forced to look over their shoulder after repeated assassination attempts.

According to Ukrainian intelligence, underground partisans “eliminated” 70 Russian soldiers carrying out night patrols in a three-week period earlier on in the war.

The Ukrainian resistance has led some experts to question if Moscow is truly prepared to handle such guerrilla-style attacks even if they do manage to annex the Ukrainian territories.

For now, however, Russia’s plans to carry out pseudo-referendums have already been hit with setbacks—after initially planning for early September, Russian lawmakers now appear to be aiming to hold referendums in November.

Nina Semenets, a resident of Melitopol who spoke to the independent news outlet Meduza, called the Russian plans for a referendum “some kind of parody of a parody.”

“Everyone is waiting for the [Ukrainian military] to free us. We’re glad when the army hits [Russian] military facilities in the city,” she said.

Semenets and other residents interviewed by Meduza say Russia is trying to fake support for annexation, which most locals don’t want. The mayor, Fedorov, has accused Russia of literally transporting in hundreds of people from other occupied territories on buses in a bid to find more support.

Russian forces are also accused of trying to stifle any dissent by carrying out “night-time abductions” of any Ukrainians who resist the takeover.

Those who are abducted, Semenets said, are snatched up at night by Russian forces who put a black trash bag over their head before driving them “in an unknown direction.”

“We have not seen some people for many months. The nephew of one of our activists was held for several weeks and then let go—with blue ribs. He said there were young and old people, and women, [among the detained people]. He said he’d heard as one elderly woman cried loudly.”