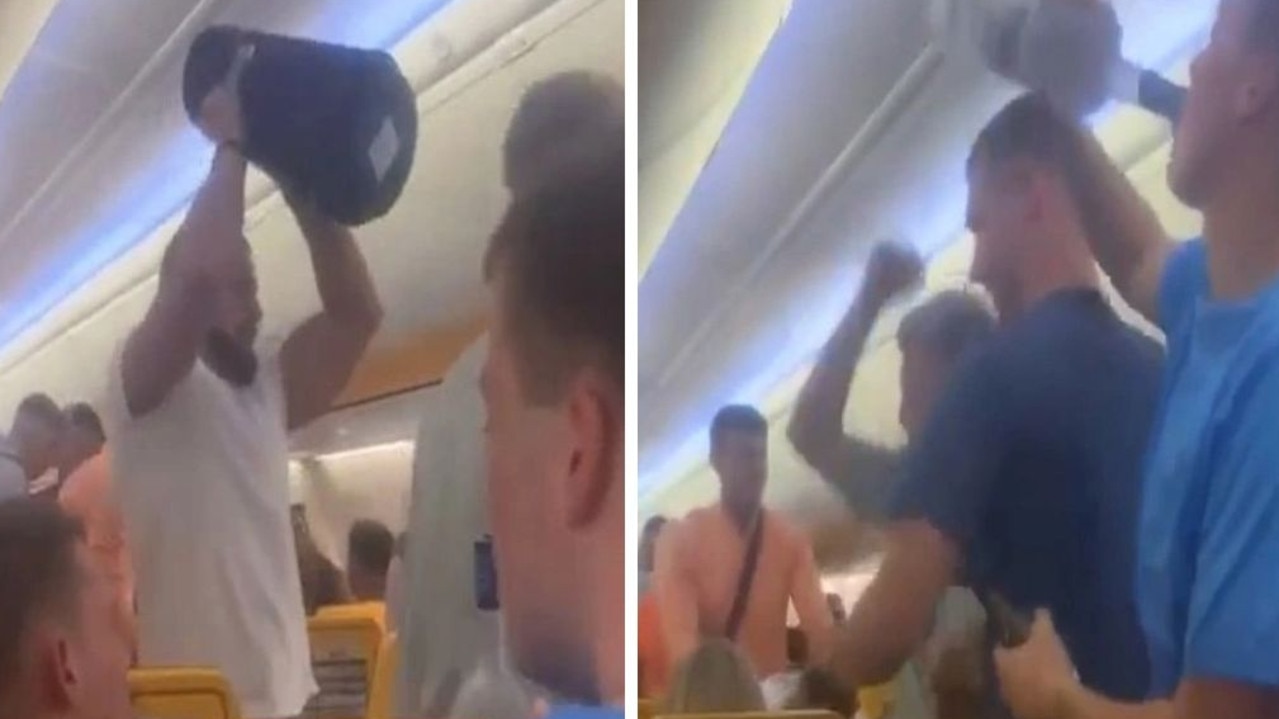 Holiday-makers were left terrified as dozens of rowdy passengers partied in the aisle of the plane, which was travelling from Edinburgh to Ibiza, The Sun reports.

A Scottish couple told of their “horrible” ordeal as the drunken revellers downed booze they had bought at the airport’s duty free shop while shouting and dancing during the three-hour flight to the Spanish party island.

The chaotic footage shows the friends drinking from a bottle of Grey Goose vodka, while another holds a large portable speaker overhead as they blast dance tunes and party in the aisle.

The woman said her husband, 58, was confronted on the way back from the bathroom by a drunk passenger, who then made a rude gesture towards him.

And she claimed staff failed to control the crowd, only approaching them “to serve them more drink”.

The shocking scenes during the flight on September 25 led to the couple making a formal complaint to Ryanair, to which they claim they received a “copy and paste” reply.

She told the Daily Record: “The response from Ryanair was a joke. I didn’t expect anything else though, to be honest.

“They’ve got you there because it’s cheap flights but even though it’s a bargain, you shouldn’t have to go through that. Passenger safety comes first.

“There was no control over that plane at all. It was horrific from the minute we got on. There were about 70 of them who all came from the same area. They had a big black speaker at the highest volume you could get which was blaring for three hours.

“They were banging on the roof, taking their tops off, and opening their drink that they had bought at duty free,” she said.

“The other passengers were getting really annoyed at this behaviour and it could have erupted into a full-blown war.”

She said that when it came time to land, the situation was out of control.

“When we went to land, there was a storm which was bad enough. The air hostess was shouting over the speaker to sit down or the plane wasn’t going to land because they were all still standing up.

“There were no police waiting for them at the airport. I understand that they were happy and excited about going on their holiday. I’ve flown to Ibiza for the last 16 years to the same wee place. I’ve seen a bit of partying on the flights before but nothing like this.”

A spokesperson for Ryanair said: “A group of passengers on this flight from Edinburgh to Ibiza became disruptive mid-flight.

“To diffuse the situation and minimise any disruption to passengers, crew made several announcements throughout the flight and refused to serve more than two alcoholic drinks to each passenger.

“Passengers ceased their disruptive behaviour before landing safely in Ibiza.”

Fifth of Scots turn to charity for help with Christmas dinner