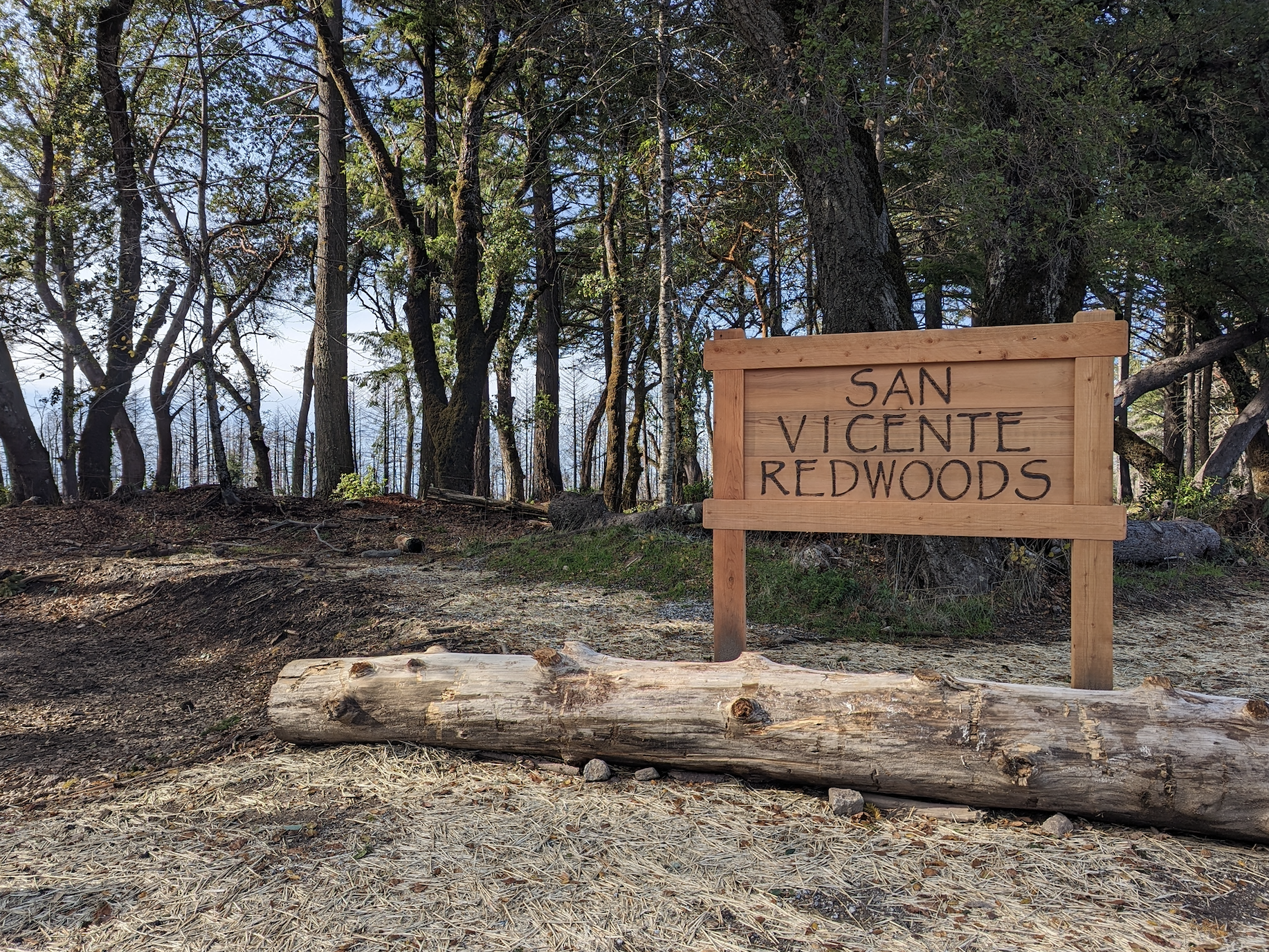 I can only imagine what this hike would’ve looked like before the fire.

A freshly forged hiking trail weaves through resilient redwoods and features outlooks of ocean views. The trail system recently appeared along the border of the Bay Area and Central Coast in the hillside of Santa Cruz County.

Impossible to overlook within the beauty is a ruthless reminder of a dark shadow cast over the Golden State: Hiking in San Vicente Redwoods stands as a must-see look at the impact climate change brings to our landscape.

Thanks to the long-delayed development in Santa Cruz County, hikers can now simultaneously get a front-row seat to the devastating impacts of intense wildfires and the impressive results of fire suppression efforts.

Views of the Santa Cruz Mountains and the Pacific Ocean help digest the message along the way.

The decadelong project — situated along Empire Grade near Ben Lomond and Bonny Doon — is a frightening and fascinating look at fire-scarred open space just two years after the CZU Lightning Complex Fire leveled the area, destroyed hundreds of homes and destabilized the ecosystem for countless wildlife.

The trails are the result of a joint effort from the Land Trust of Santa Cruz County, Peninsula Open Space Trust, Sempervirens Fund and Save the Redwoods League. The collective acquired the property in 2011 when the forest was unhealthy, following a century of intensive commercial logging.

After years (and I mean years) of community meetings, trail design, land development and the arduous task of landing permits, officials were finally ready to break ground on the San Vicente Redwoods project in late 2020. Then the fire hit.

Unlike fires before it, the CZU Lightning Complex Fire didn’t just graze the property — the flames utterly destroyed everything in its path and left a burn scar that swallowed the 8,852-acre space.

“We haven’t seen fires of that intensity in redwood forests ever,” Ian Rowbotham, a land stewardship manager at Sempervirens Fund, told SFGATE.


Long after Cal Fire extinguished the flames, the California Governor’s Office of Emergency Services and the county handled hazardous tree removal on the expansive property. Officials then spent the next 18 months completing a herculean task of installing trails as dead trees and burned-out root systems formed a park that its designers hadn’t originally envisioned.

“Visually, the landscape post-fire was so, so jarring,” Rowbotham explained. “It went from greens and browns to variations of blacks throughout the entire property.”

However, San Vicente Redwoods has its verdant corners.

A small portion of the open space, now home to the Great Horned Owl Trail, was part of fire suppression efforts that occurred months before the CZU Lightning Complex Fire. A lush green forest mostly survived the powerful flames, standing today as evidence of the importance of prescribed burns and managing dense vegetation.

“It was the singular green strip in what was otherwise a nuked landscape,” Rowbotham said.

The park, which opened 7.3 miles of trails to public access in December, still has that new car smell — in fact, a staff member from the land trust was in the parking lot literally installing a new trail map sign when I arrived on a recent afternoon. Everything, from the parking lot to the bathrooms, is newly constructed.

Hiking boots on, I was ready to tackle the trails, all of which have been named in the language of the Awaswas people who resided in San Vicente Redwoods for centuries.

The fire eliminated all vegetation, leaves and tree canopies from the ground up, leaving wide swaths of open sky and enabling sunlight to cover most places where hikers, bikers and equestrians are allowed to go. Needless to say, there was no shade on many of the paths. (Pack your sunblock.)

You’ll also want to wear layers for this hike. It’s one of those coat-on, coat-off, coat-back-on-again kind of hikes. Down in the canyon, portions of the freshly laid trails are chilly followed by warmer stretches courtesy of the aforementioned sunlight.

You’ll see (and more importantly, hear) many things at San Vicente Redwoods. Due to the lack of vegetation that typically muffles the sound of a forest, everything around you suddenly becomes a lot louder.

Rowbotham said upward of 50 sonic stations were installed throughout the area with acoustic monitors to record sound and video. He said they have detected a strong return of wildlife to the open space in recent months, specifically woodpeckers and birds that thrive in openly forested areas.

Giant dead trees pepper the sides of the trails, and signage explains these were purposefully left in place as “the high-rise condos of the natural world” for birds, reptiles and small mammals to nest or den. The logs are pitch-black and soft to the touch, and be careful, as the trees remain fragile and may leave black soot on your hand if you’re so inclined to get personal.

I saw on the redwoods how their green crowns high in the air remained intact while the rest of the tree was scorched. Pinecones present at the time of the fire hung on many other trees and hardened in place as a reminder of events passed.

But it’s not all doom. The thick brush has had more than two years to regrow — and it has, standing roughly 7 to 10 feet tall in many places.

After my hike, I backtracked to Felton, a lively mountain community about 20 minutes south of the redwoods.

Wild Roots Market provides locally grown and ethically sourced food, plus one heck of a deli. There’s an array of signature sandwiches, and I went with the Henry Cowell Club, affectionately named for the beautiful nearby state park. Across the parking lot is the Humble Sea Brewing Company Tavern, home to some of my favorite craft beer in the Bay Area plus a full menu.

If this hike is on your list, be sure to register for a permanent free pass before making your way by visiting the land trust’s website. And if you forget, there’s a registration kiosk in the parking lot.

Eric Brooks is a multimedia journalist with more than a decade of experience in radio and digital storytelling. He hails from the Midwest, where he graduated from Valparaiso University, and now proudly calls the Bay Area home.

Must-haves for the perfect summer holiday revealed – are they on your list?

The abandoned English airport with plans to relaunch budget flights to Spain,…

Amid debt ceiling standoff, why Joe Biden is refusing to…

F-16s would give Ukraine an advantage, but risk escalation |…