Would you still be in the mood for a Mars bar if it came with a photo of someone getting open heart surgery?

Similar pictures have adorned tobacco products since 2008 and are credited with pushing smoking rates down in the UK in recent years.

Seven in 10 people chose a piece of fruit over a Galaxy, Mars, Dairy Milk or Snickers that had a graphic label, in one test of the tactic.

Messages alerted them to the risk of heart disease, obesity and cancer from eating ‘excess calories’.

In comparison, only about 40 per cent of the volunteers chose fruit when they were exposed to the standard chocolate packaging.

Researchers claim emphasising the ‘relationship between the product and its health effects may be the key to targeting unhealthy food consumption’.

The study found that random gruesome images that had no links to people’s health also put them off eating chocolate bars.

Some participants were asked to choose between fruit or chocolate that had a photo of a dead dog that had been abandoned on the road.

In the experiment scientists also tested if gruesome, but unrelated to health, imagery and text, like pictures and descriptions of dead animals were enough dissuade people from chocolate 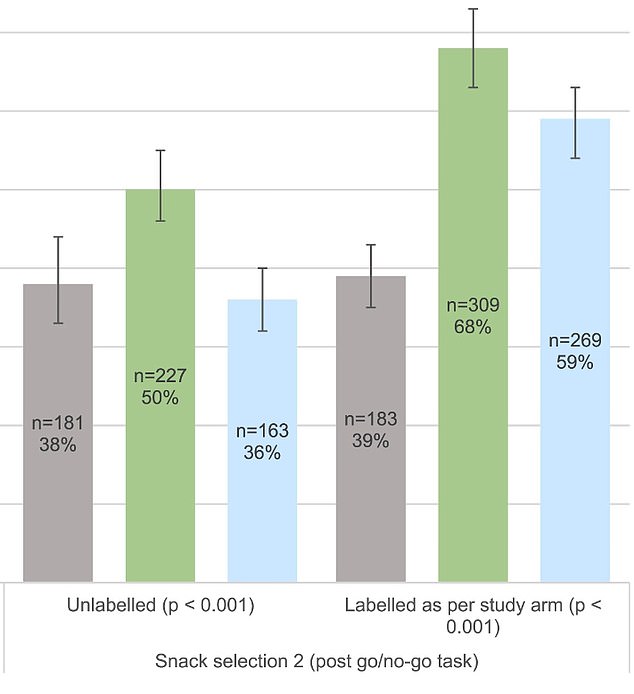 This graph shows results of the snack selection test after the keyboard experiment. Each participant was asked to select a piece of fruit or a chocolate bar. The grey bars show results of the standard label group, the green is the health warning label group and light blue the unrelated gruesome imagery cohort. The bars on the left show the results when the chocolates were unwrapped whereas the bars on the right show the results of when the labels were present. The results show that health warning labels encouraged nearly 7 out of 10 people who saw them to select fruit. Even when they weren’t present 50 per cent of people who had previously saw also opted for fruit. The ‘n’ in the bars indicates the number of volunteers who chose fruit 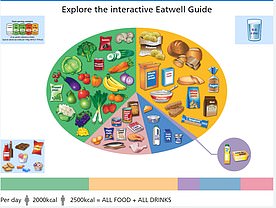 Meals should be based on potatoes, bread, rice, pasta or other starchy carbohydrates, ideally wholegrain, according to the NHS

• Base meals on potatoes, bread, rice, pasta or other starchy carbohydrates, ideally wholegrain

• 30 grams of fibre a day: This is the same as eating all of the following: 5 portions of fruit and vegetables, 2 whole-wheat cereal biscuits, 2 thick slices of wholemeal bread and large baked potato with the skin on

• Eat some beans, pulses, fish, eggs, meat and other proteins (including 2 portions of fish every week, one of which should be oily)

• Choose unsaturated oils and spreads and consuming in small amounts

One possibility is that graphic images work by ‘eliciting negative emotional arousal’, the researchers suggested.

But exposure to these adverse images was slightly less effective.

It is mandatory for all cigarette packets to include text and picture health warnings, such as an image of cancerous lungs.

Currently, only nutritional information like calories, fat, sugar, and salt content have to be displayed on food packaging.

A voluntary traffic light label that highlights high levels salt, sugar and fat content are is used in the UK, but there are suggestions the Government could make it mandatory.

Researchers recruited 1,382 adults in the UK who liked and consumed chocolate at least once a week.

They were split into three groups — with people shown chocolate bars with a health warning, a random gruesome image, or standard packaging.

In the initial test, participants controlled a stick figure on a computer and were told to approach or avoid chocolate bars as they appeared on the screen.

Another test saw the same participants instructed to use a keyboard to zoom in or away from chocolate bars, with incorrect responses recorded.

Images of stationary items, such as an unlabelled pen, ruler and scissors, were also used in both tests as a comparison.

A similar result was recorded for random gruesome image labels, with people who saw these being 30ms slower than the no label group.

It suggested the labels made them hesitate.

After each of the two tests participants were asked to select from eight hypothetical snacks, four of the branded chocolate bars used in the test and four fruits: an apple, banana, orange, and grapes.

In one version of this test each test group was presented with the chocolate bars unwrapped.

Whereas in another version each group received the chocolates as they were wrapped in the earlier tests, with either a health warning, a random gruesome image, or standard packaging.

Results for after the keyboard test showed that when labels were included 68 per cent of the health warning label group opted for a healthy snack.

Similar results were observed after the stickman test, according to results published in the journal Appetite. 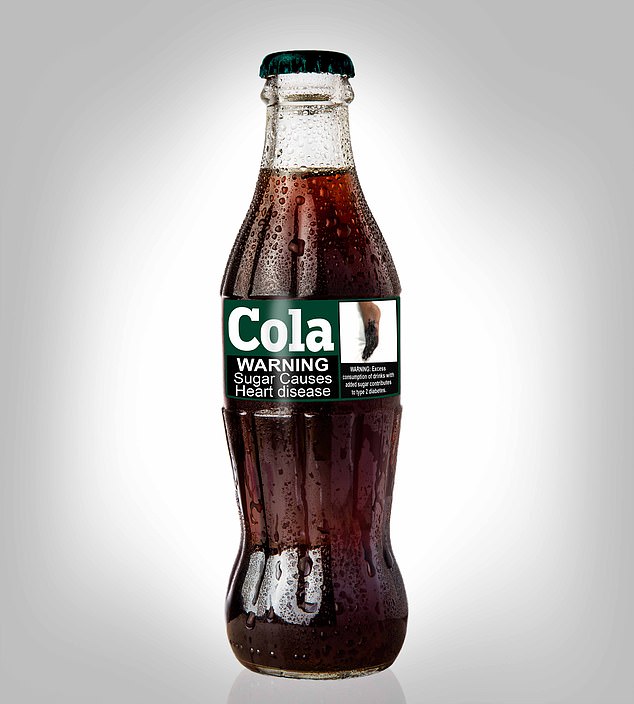 Scientists have proposed cigarettes style health warnings on a number of products to tackle obesity, including drinks high in sugar. Pictured here is a  mock-up of what a warning label about the health risks of sugar on a soft drink could look like 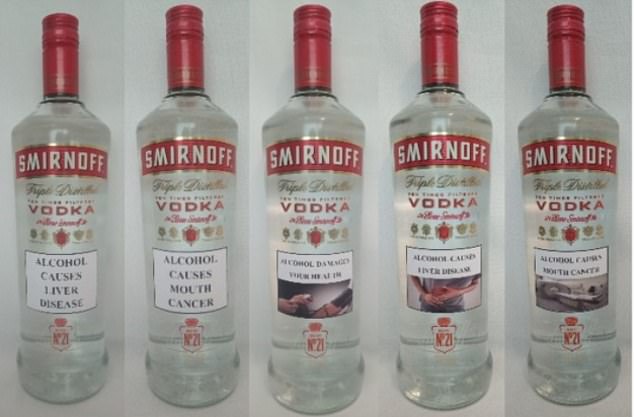 Results for the unlabelled test, where the chocolates were presented without packaging, showed the health label group were also more likely to choose fruit.

In this test, half of people exposed to health warning label in the earlier tests choose fruit, compared to only a third in the gruesome imagery group.

Scientists theorised the health warnings had more of a ‘lingering effect’ on participants who saw them making them more likely to mentally link chocolate to negative health messages, even when the label wasn’t present.

‘This suggests that in the absence of aversive labels, health-warning-labels have a greater lingering effect than irrelevant aversive labels following exposure to labels during the implicit motivation tasks,’ they wrote.

In the final test of the experiment participants were also asked to score how much they wanted and liked a chocolate bar out of 100 after the other tests.

People exposed to the health warning labels scored up to 12 less points for wanting and liking chocolate, compared to the standard label group.

Those in the gruesome imagery group scored eight points less.

Since the start of this year, academics have suggested sticking warning labels on both alcohol and fizzy drinks to combat cancer rates and childhood obesity

More than 42million adults in the UK will be overweight or obese by 2040, according to new projections by Cancer Research UK

Obesity is considered one of Britain’s biggest and ever-expanding health issues, with the latest data showing 64 per cent of adults are overweight.

However, a recent analysis by Cancer Research UK predicted 71 per cent of adults in the UK will be overweight by 2040.

This includes 36 per cent who are likely to be obese — meaning they will outnumber people in the less severe category for the first time.

In the US an estimated 73.6 per cent of adults are considered either overweight or obese.

Being overweight or obese is known to increase the risk of at least 13 different types of cancer and causes other dangerous conditions such as high blood pressure and type 2 diabetes.

The Government is due to reveal its next steps for the food packaging traffic light system in its health disparities white paper, due to be published this year.

The cost of wildfires is rising. But by how much?