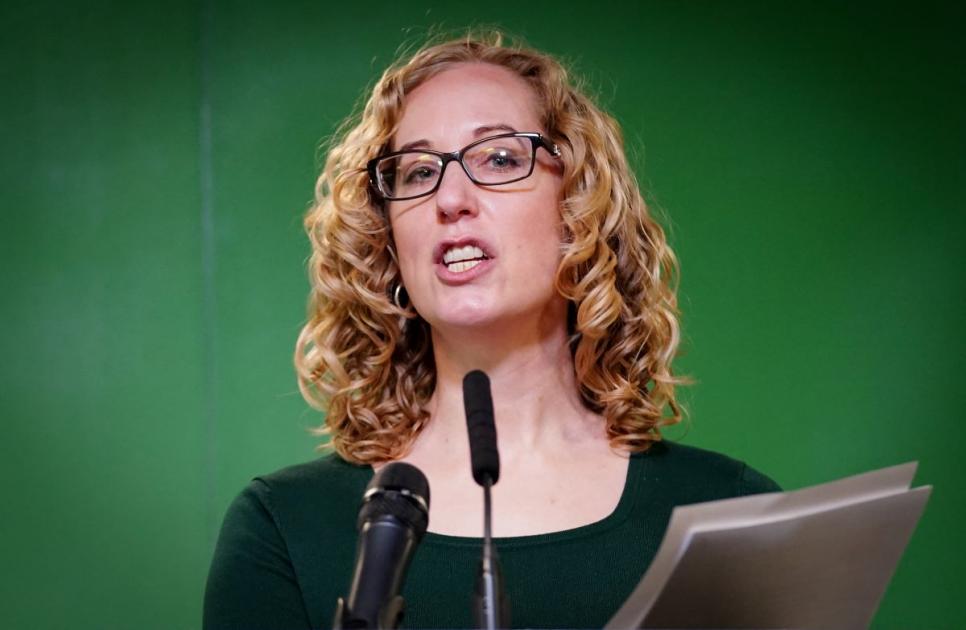 THE JUNIOR partner in the Scottish Government has called for the biggest energy companies to be nationalised to cut soaring fuel bills.

The Scottish Greens, who this week marked one year of being in power with the SNP at Holyrood, have called for British Gas, E.On, Ovo, EDF and Scottish Power to be run by the state.

The party is also proposing the energy price cap rises are reversed back to the levels in October 2021, reinstate the £20 Universal Credit uplift temporarily rolled out during the pandemic before doubling the payment.

The Greens also want the national minimum wage to match the Real Living Wage – while Scotland’s block grand from Westminster should be inflation-proofed, under the plans.

Under the radical package of policies, the Greens want profitable corporations to be it with an affective windfall tax with the current exemptions and loopholes removed.

The Greens, who run the Scottish Government in co-operation with the SNP have today claimed that taking the companies into public ownership would allow for bills to be slashed to more affordable levels.

The party argue nationalisation would prevent a transfer of public money into the hands of private shareholders, which would be the result of any attempt by the government to reduce household bills whilst allowing energy providers to remain privatised.

The party will today unveil a six point recovery plan which also includes expanding windfall taxes on profit-making companies such as BP and Amazon.

The TUC estimates that taking them into public ownership would cost £2.85bn.

The Scottish Greens say the plan is essential to help support those being plunged into debt and poverty over the coming weeks and months.

“Millions of people are being forced to choose between heating and eating, while energy companies are raking in record profits.

“Things can’t go on like this. If the UK Government allows this to continue then we will be looking at a social emergency beyond anything that this country has experienced for generations.”

She added: “So many of the fundamental decisions about our economy sit with a cruel and incompetent Tory government that’s missing in action. From raising wages to raising benefits, and from taxing the obscene wealth of the oil and gas companies to curbing the out-of-control price hikes, these things can only be done from Westminster.

“By taking these companies into public hands we can ensure that they work for people and the planet.”

“With Greens in Government at Holyrood, we are leading the change. We have doubled the Scottish Child Payment and increased the benefits we control in line with inflation, providing vital support to families who are being hit with skyrocketing bills. We have introduced free bus travel for everyone under 22, opening Scotland for young people and their families, and ensured that all government contracts pay at least the living wage. This is a totally different approach from the Tories, who have no solutions and are trying to cut their way out of a crisis.

“A fairer, greener future is possible and Scotland deserves the chance to make it happen. If the Tories fail to meet this challenge then the people of Scotland need the powers and the chance to do it for ourselves.”

The new plan is being published ahead of an energy summit on costs to take place, hosted by the First Minister.

The event will include energy supply companies and consumer groups – aimed at discussing how advice and support for people struggling with energy bills can be improved.

Labour has written to Boris Johnson, as well as the two Tory leadership contenders, demanding that Parliament returns early in order to tackle soaring energy bills.

Sir Keir Starmer has unveiled a “fully costed” £29 billion plan to freeze the cap at the current level of £1,971 for six months from October, saving the average household £1,000.

The call for MPs to return two weeks early on August 22 comes ahead of the announcement of the new energy price cap at the end of the month, which Labour has called a “crucial deadline” for Government action.

In the letter, Thangam Debbonaire, the shadow leader of the House of Commons, told Mr Johnson that the country faces an “urgent choice”.

It comes as figures published this week showed that inflation rose to 10.1% in July.

She said: “Across Britain, people are having to make unthinkable choices about how to pay their bills, causing endless worry for households and businesses.

“That is why I am writing to you today to urge you to bring Parliament back early on Monday 22 August so that we can freeze the energy price cap now ahead of winter.

“In seven days, Ofgem will announce the rise of the energy price cap.

“Against the backdrop of a rise in inflation to 10.1%, this won’t just send households into a further spiral of worry, pushing them to cut back even further ahead of the winter. But it will create another shock for our economy. With businesses and households on the brink, we cannot wait to act.

“Families deserve a government that is on their side, and is ready to take the action needed now to meet the scale of this national emergency. I urge you to adopt Labour’s plan and take action to freeze the price cap now.”

Neither the Government nor Liz Truss and Rishi Sunak have shown any willingness so far to adopt Labour’s strategy, with the Foreign Secretary sticking to her plans for tax cuts and promising an emergency budget if she becomes prime minister in a few weeks.

A UK Government spokesperson said: “The Government is continuing to focus on delivering for the public.

“While fiscal decisions for the coming months will be for the next prime minister, we are continuing to support people directly now with financial support as part of our existing £37 billion package which will continue to arrive in the weeks and months ahead to help people with the rising cost of living.

“This includes the second £324 instalment of the cost-of-living payment for vulnerable households which will go into people’s bank accounts in autumn, extra help for pensioners and those with disabilities, and the £400 energy bills discount for all households this winter.”

‘Actor Cillian Murphy, our patron and friend, has been…