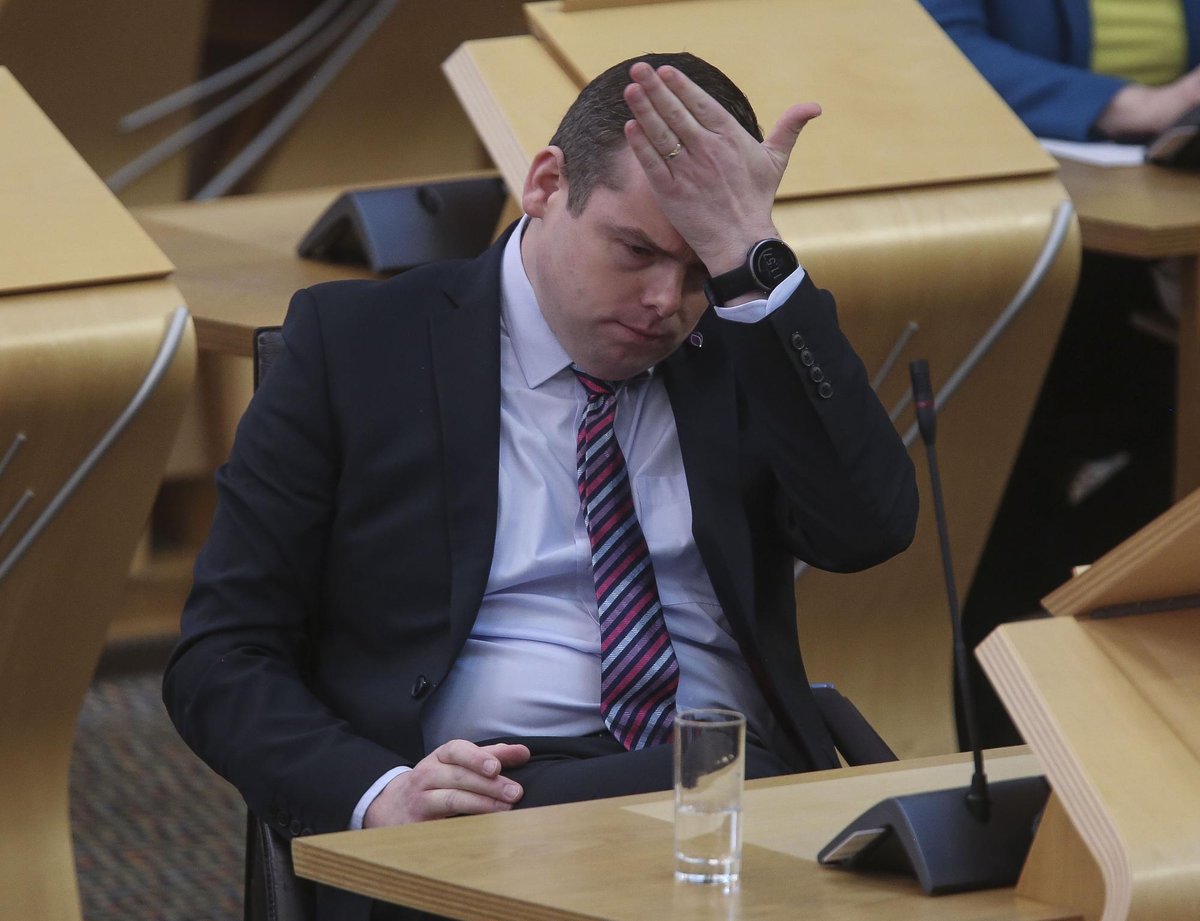 In the party’s worst polling figures in seven years, such a result would see leader Douglas Ross, Scotland Secretary Alister Jack, and Scotland Office minister David Duguid lose their seats to the SNP.

It comes as Liz Truss continues to fight to regain control of a cabinet in mutiny following the end of the Conservative Party Conference as the fallout from the government’s tax-cutting, borrowing-heavy ‘mini budget’ continues.

The poll, undertaken by Savanta ComRes for The Scotsman, interviewed 1,029 Scottish adults aged 16 and over between September 30 and October 4.

This means the figures demonstrate the scale of the damage to the Conservative brand following both the market response to the Chancellor’s ‘fiscal event’ and the government’s U-turn on the abolition of the top, 45 per cent, tax band.

‘Coup’, chaos and conflict: What we have learned from the Tory conference

Despite the economic turmoil, support for independence continues to stagnate with a 50/50 split between the population, with support for Yes at 49 per cent and No at 51 per cent when undecideds are excluded.

Chris Hopkins, political research director at Savanta ComRes, said the figures show Labour are “fishing in the unionist vote pool” rather than gaining from the SNP.

Scottish Conservative leader Douglas Ross is facing losing his seat at the next general election.

He said: “The difference between Scottish Labour and the Scottish Conservatives, particularly in the Westminster voting intention, will be particularly striking, with the former opening up a 15pt gap and fully establishing themselves as Scotland’s second party. Given the unpopularity of the Conservatives across the rest of the UK at the moment, it’s no surprise the story is similar in Scotland.

“However, the SNP remaining strong on 46 per cent is notable. I would not have been surprised to see Labour potentially eat into that SNP vote share, even marginally, and the fact that they did not all-but confirms that the Labour Party are fishing in the unionist vote pool rather than a specifically centre-left one in Scotland.

“And even with 30 per cent of the vote, without taking votes from the SNP directly, it’s unlikely that Labour would gain many more seats in Scotland.

“Their route to government, therefore, rests on beating the Conservatives handsomely in England and Wales, rather than relying on Scotland as they did under Blair and Brown.”

The Tories are facing wipeout in Scotland

The figures could intensify calls for a change of leadership within the Scottish Conservatives following reports two separate groups of MSPs were plotting against Mr Ross.

Just 15 per cent of Scots said they would back the party, their worst polling figures since the 2015 general election when it held on to one solitary seat in Dumfriesshire, Clydesdale and Tweeddale.

It will also be a confidence boost to Scottish Labour with their support at the next general election sitting at 30 per cent, their highest figure in five years since October 2017.

However the result would still leave them trailing far behind the SNP who are the biggest beneficiaries of the Tory collapse.

Several seats are too close to call between Anas Sarwar and Nicola Sturgeon’s party, meaning a handful of votes either way could see Labour gain up to six or seven seats, with the SNP mitigating those losses by gaining Tory constituencies.

Assuming the election is fought as a ‘de facto referendum’ by the SNP, the polling also shows the party falling short of the 50 per cent mark for a victory, despite gaining seats overall.

The general election polling shows the SNP unchanged from the last Savanta ComRes poll in June on 46 per cent of the vote.

Labour are up five points to 30 per cent, Conservatives down three to 15 per cent and the Liberal Democrats down one point to seven per cent.

The SNP would gain five seats overall, with eight gains from the Tories and the Liberal Democrats, and three losses to Labour.

It could even see Ms Sturgeon’s party finish as the official opposition in Westminster with 53 seats to the Conservatives, UK-wide, only winning 37 seats. Labour would be left with a majority of 388, the site projects.

The figures also spell bad news for the Alex Salmond’s Alba party which faces electoral extinction. The two seats won by the SNP, held by Kenny MacAskill in East Lothian and Neale Hanvey in Kirkcaldy and Cowdenbeath who defected to Alba last year, will likely be won by Labour.

The Scottish Liberal Democrats will also hold on to two of their four seats, Edinburgh West and Orkney and Shetland.

Scottish Tories hoping for a brand recovery for the party in Scotland with the removal of Boris Johnson will fail to be reassured by Liz Truss’ favourability ratings.

The new Prime Minister is already less popular than Boris Johnson, with a net favourability rating of -57 per cent, despite the poll covering the period in which she u-turned on the abolition of the top rate of tax.

Only former first minister, Alex Salmond (-61 per cent), is more unpopular among Scots.

Ms Truss is also not popular among Scottish Conservative voters, with a net favourability of -3 per cent among 2021 Tory Holyrood voters and -12 per cent among 2019 Tory general election voters.

Kwasi Kwarteng is also deeply unpopular with a net favourability rating of -48 per cent, just five points higher than ex-Prime Minister Boris Johnson who has enjoyed a nine point improvement since his resignation.

Scots also think the change of Prime Ministers is bad news for the economy, with three quarters (74 per cent) of Scots stating the country’s financial woes would get worse over the next 12 months, with just 12 per cent stating it will improve.

Despite the chaos in Westminster, support for independence remains stuck at around 50 per cent, with Scots also not backing an independence referendum to be held next October.

Around two in five (39 per cent) believe there should be a referendum this time next year, with 55 per cent stating there should not be a vote.

This is despite more people that previously arguing that the case for independence is stronger than it was in 2014.

Now 44 per cent, up four percentage points, believe it is stronger, compared to 30 per cent arguing it is weaker and 19 per cent stating the strength of the case has not changing.

In Holyrood, however, there is no equivalent Labour bounce with the SNP still the largest party by a significant margin.

In the regional list, the SNP are down one point on 32 per cent, Labour up two points to 26 per cent, and the Conservatives down one to 19 per cent.

The Scottish Greens are also holding steady on 13 per cent, with the Liberal Democrats on eight per cent and Alba on two per cent.