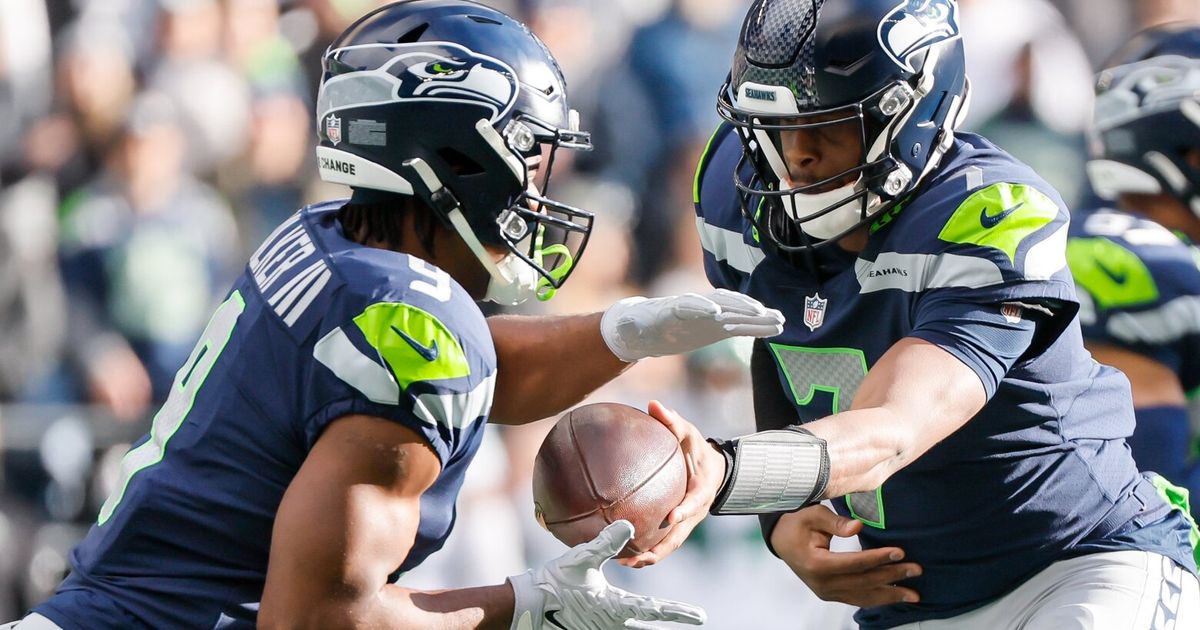 RENTON — Call this the NFL’s version of a doubleheader.

If the Seahawks can beat the Rams in an actual NFL game Sunday at Lumen Field, they will be forced to play the waiting game to see if Detroit can beat Green Bay and allow Seattle to get into the playoffs.

The Seahawks, Lions and Packers all enter the weekend 8-8, each vying for the seventh — and final — spot in the NFC playoffs.

If Seattle gets to 9-8, it needs the Lions to beat the Packers at Lambeau Field since the Seahawks hold a tiebreaker edge on Detroit (due to a win over the Lions earlier this year) but not on Green Bay (due to a worse conference record).

But if the Seahawks lose to the Rams, it won’t matter, leaving the Lions and Packers to play for the last spot.

“All we’ve got is what we can do, and that’s going out there and winning this game on Sunday and becoming the biggest Detroit fans in the world after that,’’ said quarterback Geno Smith.

Neither game may be all that much fun.

As the longest-tenured Seahawk, Tyler Lockett, said this week: “If there’s any team that wants to spoil our season, that’s the Rams. Especially with Bobby (Wagner) being able to come back.’’

Indeed, there was a time — specifically, before the season began — when this game figured to be most notable for the return of Wagner, one of the most iconic and popular players in team history who was cut by Seattle on March 8, a few hours after the trade of Russell Wilson to Denver.

Those two moves had most NFL observers figuring that about the last thing Seattle would have on the line on the last weekend of the season was a winning record and a playoff berth — remember Sports Illustrated’s prediction that the Seahawks would go 3-14?

“I think nine wins in a season where nobody expected us to get three, four or five wins is a good thing,’’ receiver DK Metcalf said this week. “The goal is to always make the playoffs, and if we don’t do that, then winning our last game and having momentum for the next season is always the next step.”

And no doubt, simply beating the Rams and getting to 9-8 after the 7-10 record of last season with a team that is playing six rookies substantially — with legitimate candidates for Rookies of the Year on each side of the ball — and assured of a top-five pick in 2023 and as many as five in the top 85 would color this year as a significant step in the right direction for the long-term future of the franchise.

But after a surprising first half that saw Seattle jump out to a 6-3 record and what was at the time the team traveled to Munich to play Tampa Bay a game-and-a-half lead on the rest of the division, a losing record would be a bit of a disappointment, even despite all the bigger-picture positives of the year as a whole.

The good news is that Seattle is a 6.5-point favorite against a Rams team having the most disappointing season ever for a defending Super Bowl champion — LA’s 11 losses are already the most for any defending champ in league history.

The Rams also remain without stars such as quarterback Matthew Stafford, receiver Cooper Kupp and defensive tackle Aaron Donald, all out due to injury. Stafford’s injury compelled the Rams to pick up Baker Mayfield last month when he was waived by the Panthers, claiming him on Dec. 6, two days after John Wolford started for Los Angeles in a 27-23 loss against Seattle at SoFi Stadium.

Mayfield is 2-2 as the Rams starter, winning games at home against the Raiders and Wilson and the Broncos but losing at Green Bay 24-12 and what was technically a road game against the Chargers at SoFi last week, 31-10.

The bad news is that the Packers are a 4.5-point favorite at home and have won four in a row and five of seven, a stretch that includes victories against two 12-win teams in Dallas and Minnesota, the latter a dominating 41-17 victory last week.

Seattle may also be fighting the specter of Aaron Rodgers trying to get Green Bay into the playoffs one more time at the age of 39 with his future uncertain.

The Green Bay-Rodgers angle undoubtedly played into the decision of the NFL to flex the Packers-Lions game until after Seattle’s, creating what some felt was a potentially unfair advantage for Green Bay of Detroit potentially having nothing to play for if the Seahawks win.

“I was surprised because I would think that with the implications, you would try to match up both games at the same time and try to have guys play at the same time so we don’t know as much of what is going on,’’ said Seattle safety Quandre Diggs, who played for the Lions from 2015 until being traded to Seattle in Oct. 2019 and said this week he’s been calling some of his old teammates and offering to pay for their vacations if the Lions can pull off the win — a comment that may or may not have been serious.

“I was surprised that they did that,’’ Diggs said. “But it’s the NFL. You know what it is, it’s all about money. Show them the money and they will make it happen.”

That decision instead has left Seattle to try make it happen in the afternoon and then wait to see what happens at night.

Tom Hanks loved getting grumpy in ‘A Man Called Otto’