Seahawks postseason spot hangs by a thread heading into K.C. 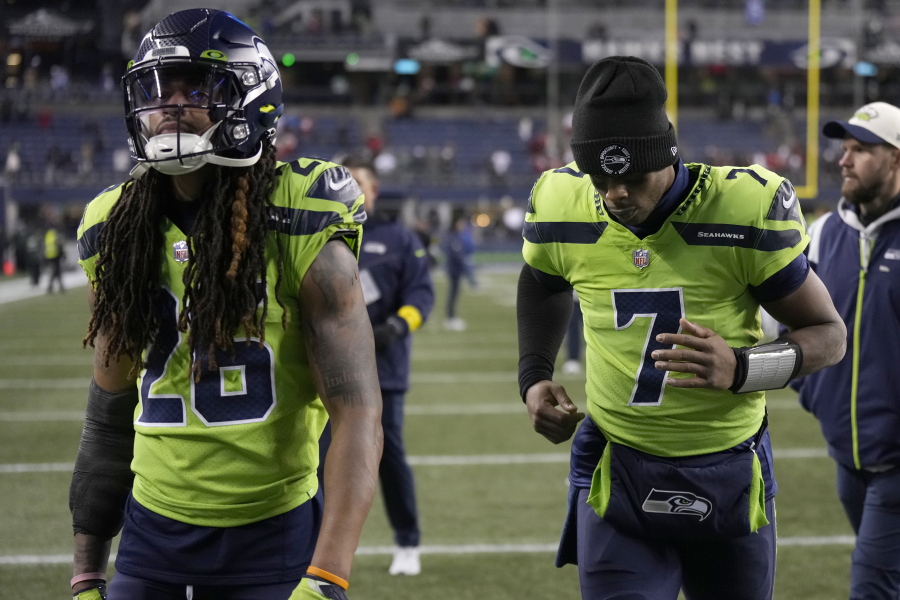 KANSAS CITY, Mo. — The Kansas City Chiefs can’t climb into first place in the AFC and secure that coveted first-round playoff bye with a win over Seattle on Saturday, nor can the Seahawks slip into the postseason by knocking off the West Division champs.

But a loss for either of them? That might ruin both of their chances.

The Chiefs, who are tied with the Bills at 11-3 for the conference’s best record, could be out of the hunt for the top seed if they fall at Arrowhead Stadium. Buffalo has the head-to-head tiebreaker by virtue of its win earlier this season.

The playoff hopes of the Seahawks, who are 7-7 and have lost four of their last five, are hanging by a thread.

More important, they desperately need to get healthy. Wide receiver Tyler Lockett is out with an injury while running back Kenneth Walker III continues to deal with a sore ankle.

“Let’s just start with this game. We’ve got to play really sharp football across the board,” Seattle coach Pete Carroll said. “We have to take advantage of all the opportunities that we get. We’ve got to catch the interceptions, we’ve got to stay onsides and not give them things. We have to make them have to work and play a championship-style game.

“If we can do that,” Carroll said, “now we are getting to our capabilities.”

The Chiefs have hosted the past four AFC title games.

“The guys know. They’ve been though this so they understand it,” said Chiefs coach Andy Reid. “The only thing I have to say is we’ve got a quarter of the season left and very important games, so we’ve got to take care of our business, and that’s where our focus has got to be.”

The Chiefs have been squeaking by the past few weeks, hardly looking like the juggernaut that’s been to two of the past three Super Bowls. They lost at Cincinnati, barely held on against downtrodden Denver and needed overtime last week to beat one-win Houston and maintain their hopes of the No. 1 seed.

The biggest issues for Kansas City have been self-inflicted: The Chiefs had 10 penalties for more than 100 yards against the Texans, and they have committed at least one turnover in nine consecutive games.

“The biggest thing,” said Chiefs quarterback Patrick Mahomes, who is riding a streak of 20 consecutive completions, “is that you just focus on getting better as a team. You want to be playing your best football as you get to the playoffs, and we have stuff we need to clean up. That will be important this week.”

Lockett will miss just the second game of his long career due to injury after breaking a bone in his left hand last week against San Francisco; he had surgery to stabilize it this week and hopes to return this season.

Lockett and DK Metcalf have been a dangerous tandem, the former with 78 catches and eight TDs and the latter with 79 and six. And while Marquise Goodwin has been a nice addition, and former first-rounder Laquon Treadwell could see some snaps, Lockett’s absence is going to mean Metcalf gets more attention.

“It’s always going to be strange whenever Tyler is not playing, or somebody has been there for so long and not playing,” Metcalf said. “It’s just another challenge along the way that we’ve got to overcome.”

Seattle showed improvement in stopping the run against San Francisco. Even though it still allowed 170 yards, it held the 49ers to 3.5 per carry until a long run late in the game. The performance was especially encouraging given the Seahawks didn’t have nose tackle Al Woods and backup Bryan Mone hurt his knee in the first quarter.

“Some execution things were pretty good, but again, we are not into the whole moral victory thing,” said coordinator Clint Hurtt, whose defense is allowing 161.1 yards per game on the ground, better than only one team in the league.

Walker is still dealing with a sore ankle that the Seahawks rookie first injured earlier this month against the Rams; he had 12 carries for 47 yards against the Niners but was still sore days later. And backup DeeJay Dallas is still trying to come back from a high ankle sprain. That could mean another opportunity for Travis Homer in the Seattle backfield.

The Chiefs expect wide receiver Mecole Hardman to play for the first time since Week 9, when he landed on injured reserve with an abdominal problem. He had scored in three straight games with five TDs total before getting hurt.

Twitter Blue subscribers get video features: How to use, other details

What time does The Voice Kids 2022 start on ITV tonight?