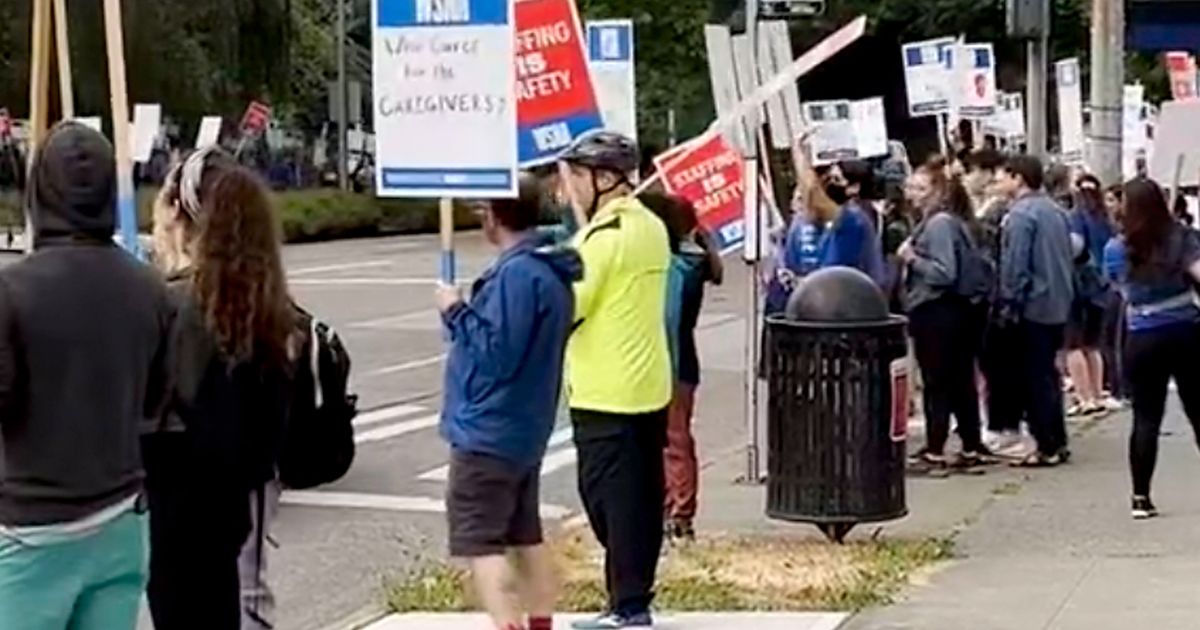 Nurses at the pediatric hospital, represented by the Washington State Nurses Association, held an informational picket for higher wages amid an ongoing staffing shortage.

The nurses association and Seattle Children’s leadership have held nine bargaining sessions over four months and are still negotiating a new contract.

Nurses involved in the picketing are doing so on their own time, so that patient care is not interrupted, a hospital spokesperson said in a statement.

“Like many health care organizations across the country, Seattle Children’s is experiencing a staffing shortage, which strains our system as a whole,” the hospital spokesperson said.

That staffing shortage has pushed nurses to work 14- or 16-hour days while corralling up to six patients at a time, when they typically care for one or two at a time, said Lindsey Kirsch, the nurse’s union treasurer and secretary.

Many of those picketing Tuesday, she said, are waiting to see the details of the new contract.

“If it’s not good enough, they’re out — they’re gone from Seattle Children’s. They may go and work in another institution. They may leave the profession entirely,” said Kirsch, an urgent care nurse at the hospital.

Edna Cortez, who works in the hospital’s recovery room and is the co-chair of the union’s bargaining committee, said Seattle Children’s hospital needs to invest in its permanent nursing staff rather than hiring contract nurses — known as travel nurses. They are typically paid higher wages than permanent staff and hired to temporarily fill in during staffing shortages.

“I’ve met many nurses, who have way less experienced than me, making two to four times more money than I do,” Cortez said. “That’s why a lot of our staff are leaving to become travelers to make a better living.”

Seattle Children’s hospital should instead be retaining nurses who live in the local community by making sure they can afford to live here, because permanent nurses, Cortez said, are more invested in Seattle patients than anyone else.

But when entry-level and midcareer nurses at Seattle Children’s hospital nurses see they can make more than double their salary at Lucile Packard Children’s Hospital at Stanford University, it creates a retention issue, said Annika Hoogestraat, a nurse in the cardiovascular intensive care unit.

Hoogestraat said while Seattle Children’s hospital says it pays nurses the most out of any other hospital — that only applies to the most experienced nurse staff.

“That’s actually a very small number of our staff.,” Hoogestraat said. “The majority of the staff actually don’t make enough of a living wage to be able to live close by.”

Osaka exits opening match at Toronto with back injury