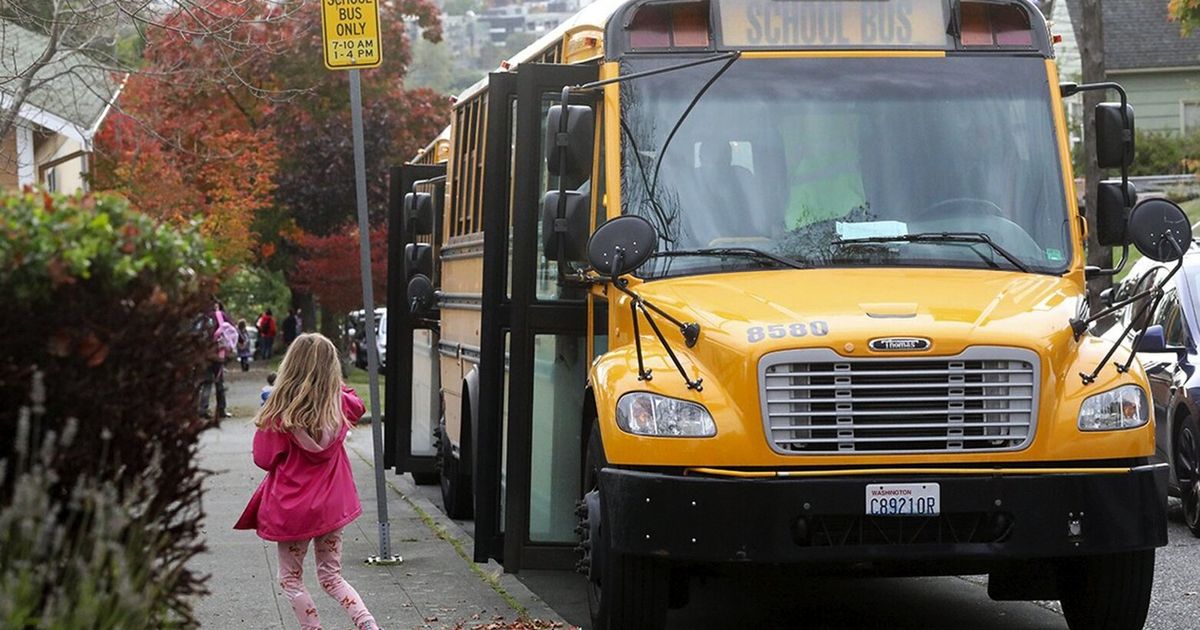 But now that most buses are arriving on time, the district is attempting to tackle another issue: the cost. At a time when Seattle Schools is projecting millions of dollars in budget shortfalls, officials are looking to cut the price of bus service where they can.

SPS has a goal of reducing transportation costs by $7 million, the equivalent of eliminating about 70 buses and drivers. To cut costs, district officials have started to discuss various options, including changing school start times — an idea that wasn’t popular among families when it was proposed last school year, and was dropped after a backlash from parents and board members.

Other options include having more students with individualized education programs ride the same buses as students in general education, changing walking zones so more students will need to walk to school, or having students who want or need to take the bus opt-in for transportation instead of giving them automatic eligibility.

The district is also considering changing transportation for students going to option schools and adjusting transportation standards so some students will be on the bus longer. All of these proposals are preliminary, and none of them have been brought to the board for a vote yet.

Right now SPS has two school start times. Most high schools start at 8:50 a.m., and most elementaries start at 7:55 a.m. Having two start times means high school students get to sleep in a bit later, a setup that many researchers agree is better for the adolescent brain because it improves health and academic outcomes.

If the district moves to three start times, high schools would likely start earlier in the morning, and SPS could achieve its goal of reducing costs by $7 million, said Marni Campbell, interim executive director of operations, during a December School Board meeting.

But Campbell said that decision would have ripple effects. “Although we frame this as a transportation issue, we all know it’s really a schooling issue — this changes just about everything about school for everybody, and I’m not unmindful of that,” she said.

It might take a combination of all of the changes presented to the board to come even close to saving $7 million, Campbell said.

Why SPS busing is so expensive

In July, the district tried to fix its chronic bus woes by awarding its transportation contract to two bus companies, longtime provider First Student and newcomer Zum. The three-year contract cost $135.6 million, about $45 million annually. These figures are estimates and could change.

SPS spends more money per student on bus services than any other school district in the state. And even as bus ridership decreased by 11% between the 2016-17 and 2018-19 school years, spending per student on transportation increased to $3,306 — more than three times the national average.

The struggle to recruit bus drivers — a nationwide problem — was a major reason for the high cost of Seattle bus transportation. SPS spent millions on van and cab services to make up for late buses and agreed to increase payments to bus contractor First Student to help recruit and retain drivers.

Students who ride in vans or cabs aren’t counted as bus passengers by the state, which means SPS doesn’t receive state reimbursement money for those students.

Last school year was one of the most hectic in recent memory for students taking the bus. Many students missed class because of late buses and some students were eliminated from bus routes all year long because of driver shortages.

But this year, having two bus providers seems to have fixed these problems. Both Zum and First Student have followed through on their pledge to recruit and retain bus drivers.

“The fact that we had competition for the first time in many, many years was a good problem to have,” Fred Podesta, interim deputy superintendent, told the School Board in December. “I think we landed in the right place, splitting the work with two partners who have brought a lot of innovation, have brought new drivers — which is our chronic problem — into the system.”

At first, Podesta said he had concerns the two bus companies would compete for drivers from the same pool, but so far they are bringing in new recruits. He said the SPS transportation system is operating more efficiently, in terms of getting kids to school on time, than it has in several years.

“But this is coming at a cost,” said Podesta, since the district’s expenses have routinely exceeded state funding by a large amount. “It’s really an area where, as we try to find a path to a balanced budget, it [transportation costs] really just bears some examination.”

Seattle is projecting a budget shortfall of $10 million in the current school year. In the 2023-24 school year, the district is projecting to be about $127.3 million over budget, and $156.8 million the following year.

It’s difficult to compare the data between the two bus companies because Zum gave SPS percentages by the week for arrivals and departures to school and First Student only provided monthly arrival percentages. Podesta said the bus companies are only required to provide monthly figures, and Zum was just more detailed.

District officials will present a more detailed analysis of how much each option could cut costs this year.

Ambulance crews in London will only wait 45 minutes at A&Es if patient is stable, leaked letter

Bengaluru colleges put curbs on use of ChatGPT