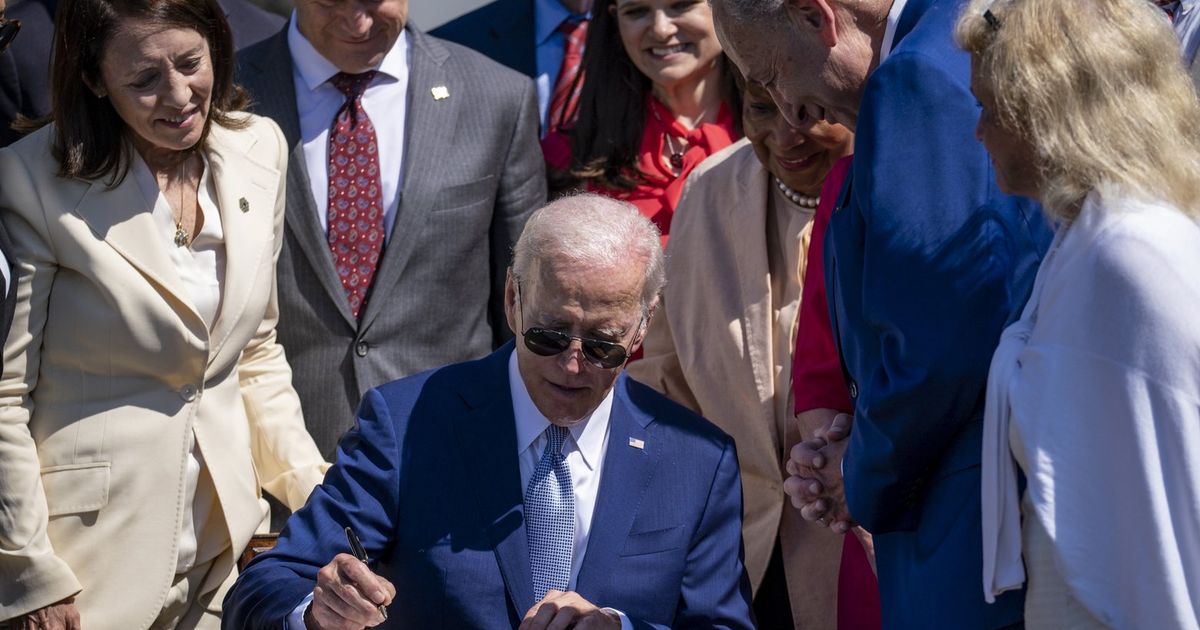 The bipartisan measure, called the CHIPS and Science Act, aims to boost the U.S. share of global semiconductor manufacturing, which has fallen to 12% from 37% in 1990.

It provides $53 billion in subsidies for chipmakers and an estimated $24 billion in tax credits to encourage them to open or expand U.S. facilities — including potentially some in southwest Washington.

“This is an investment in an area where we want to stimulate U.S. manufacturing,” said Cantwell, Washington’s four-term Democratic senator, in an interview prior to the signing.

Semiconductors are the brains of modern devices, used in everything from computers to phones, cars, planes and refrigerators. A shortage of chips in recent years has contributed to supply chain problems. For example, Bellevue-based truck maker Paccar cut its deliveries last year due to the shortage.

In addition to the semiconductor boost, the new law will direct $20 billion over five years for National Science Foundation grants aimed at turning research into patents and products.

Cantwell said that effort is modeled in part on CoMotion, the University of Washington’s innovation arm, which will be well-positioned to receive additional funding.

It also authorizes $10 billion for the Department of Commerce to create 20 regional “technology hubs” to research new technology and spur job development. Cantwell’s office said institutions in the Spokane area are working on proposals to compete for that money.

As chair of the Senate Committee on Commerce, Science and Transportation, Cantwell helped negotiate the final version of the long-sought proposal, ironing out compromises with the House version of the measure, a process involving more than 100 conferees.

Cantwell stood beside Vice President Kamala Harris and House Speaker Nancy Pelosi outside the White House Tuesday as Biden signed the measure, celebrating a legislative victory they predicted will create hundreds of thousands of jobs.

The bill received bipartisan support, passing the Senate last month on a 64-33 vote, including 17 GOP senators. The House approved the bill on a 243-187 vote with 24 Republicans voting in favor.

McMorris Rodgers, R-Spokane, the ranking Republican on the House Energy and Commerce Committee, criticized the plan in a statement last month as too reliant on government spending instead of cutting regulations.

“This is not a model America should be inspired by or embrace — we cannot beat the [Chinese Communist Party] at their own game of massive government subsidies,” she said.

U.S. Sen. Bernie Sanders, the Vermont independent who caucuses with Democrats, also slammed the bill as “a massive handout to large profitable corporations,” which he said were extorting Congress by threatening to move production to Asia and Europe.

Cantwell pointed to “guardrails” in the legislation banning companies from using taxpayer funding for stock buybacks and allowing the government to “claw back” money if companies violate restrictions on investment in China.

U.S. Rep. Suzan DelBene, D-Medina, who chairs the New Democrat Coalition, also strongly favored the legislation, which was a priority for the centrist caucus.

“Semiconductors are particularly important to Washington state’s aerospace, medical device, trucking, consumer electronics, and other industries. We need to make more of these products at home and this legislation will make critical investments to incentivize more domestic production,” DelBene said in a statement.

The final legislation also includes a $1 billion federal grant program for economically distressed regions, a pilot version of a proposal sponsored by U.S. Rep. Derek Kilmer, D-Gig Harbor, whose district includes towns that have struggled with the long-term decline of the timber industry.

The grant money can be used for purposes including infrastructure, brownfield redevelopment, worker training and small-business assistance.

“I grew up in Port Angeles and was in high school right around the time the timber industry took it on the chin. I saw a lot of my friends’ parents lose their jobs. It had a big impact on me — and I’ve spent most of my adult life trying to figure out how to make sure we are doing a better job of protecting workers and communities so that no one gets left behind in our society,” Kilmer said in a statement.

Colombia calls for deportation protection for nationals living illegally in US