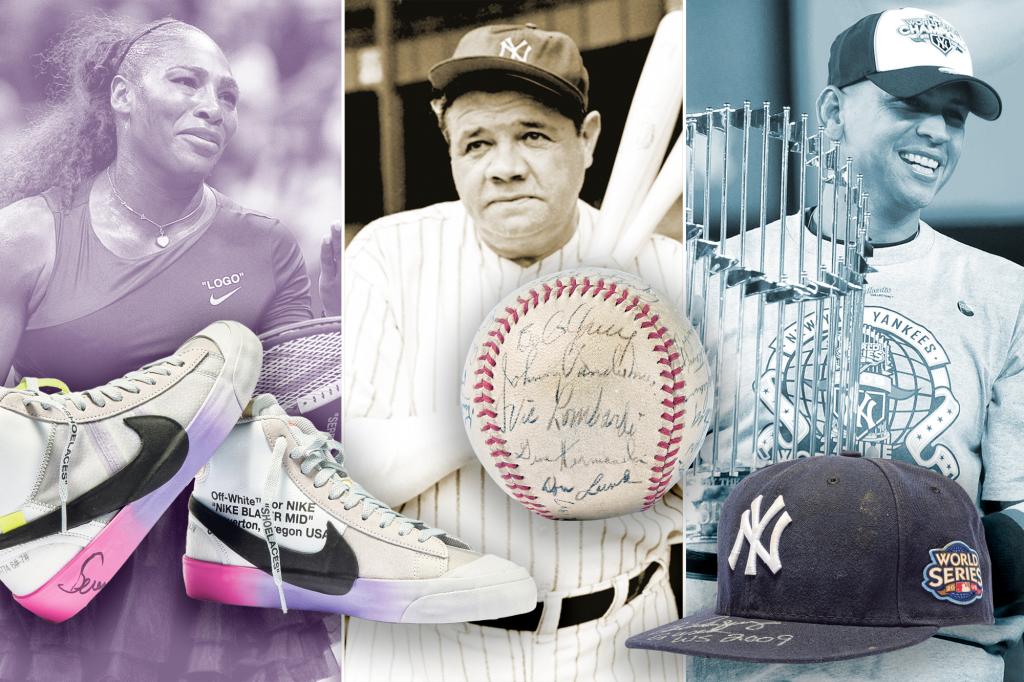 Looking to make a connection with some of the most memorable players in New York sports history? From shoes designed for the US Open-dominating Serena Williams to a baseball signed by not only Babe Ruth but Jackie Robinson, too, a jaw-dropping selection of sports equipment and apparel — each with an opening bid that makes season-ticket prices look like chump change — will hit the auction block at Sotheby’s starting Tuesday.

The auction is Part II of Sotheby’s “Invictus” event, the first of which, running simultaneously, is dedicated solely to selling off Michael Jordan’s jersey from Game 1 of the 1998 NBA Finals — his last-ever season with the Chicago Bulls. (Estimated winning bid? Between $3 million and $5 million.)

“We tried to pick a lot of things that spoke to really specific moments in time that we felt collectors would be interested in,” Brahm Wachter, head of the Sotheby’s department of “streetwear and modern collectables,” told The Post, adding that sports memorabilia is an “exciting new category” for the auction house.

Here’s a look at 10 of the items that are sure to make a sports die-hard’s dreams come true — a deep-pocketed one, anyway.

Auction items will be on public display September 6 to 14 at Sotheby’s, 1334 York Ave., during regular business hours.

The Great One spent relatively little time as a New York Ranger, but his stint as a blueshirt in the late 1990s made for a memorable final career stop for Wayne Gretzky. The hockey stick from his final NHL appearance — a 2-1 overtime loss to the Pittsburgh Penguins at Madison Square Garden on April 18, 1999 — will score once more at the upcoming auction.

“It’s such a nostalgic piece — Wayne Gretzky in Madison Square Garden, in front of a sold-out crowd, doing his last performance,” Wachter said, noting that No. 99 originally gave the stick, and the rest of his equipment, to teammates after the four-time Stanley Cup winner’s final skate.

Even after the Captain decided to hang up his hat at the end of 2014, Derek Jeter’ was still making sports history — this time with Air Jordan in 2017, when the former Bronx Bomber was honored with a Yankee-motif blue-and-white sneaker featuring his No. 2 on the heel. The move sent fans wild.

“This was a super limited release by the Jordan brand,” said Wachter. “Generally speaking, [this is] one of the most coveted Air Jordan models by collectors — an incredibly small amount of them are out there.”

Five pairs, to be exact, and they were distributed exclusively via lottery at a pop-up near Yankee Stadium, according to Sotheby’s.

The story behind the highly prized baseball signed by New York Yankee Babe Ruth and Brooklyn Dodger Jackie Robinson goes back to the fall of 1947 at a Dodgers-Reds matchup in Cincinnati. A local kid in attendance brought along a fountain pen and one of his most valuable possessions — a ball already inscribed with the Great Bambino’s John Hancock, with room for more than a few additional signatures.

“To get ahead of the crowd, we left the game before it was over in the ninth inning and went underneath the stadium where the players would come off the field once the game was over,” the anonymous seller told Sotheby’s. “Jackie Robinson, being the first black player in Major League Baseball, was under constant threat, and left the field the minute the game was over. Thus he was the first to sign the baseball for me.”

Brooklyn took the game 7-3, according to Baseball Reference.

Just after the soon-to-retire tennis legend played her final US Open, a signed pair of Serena Williams’ sneakers, designed by fashion icon Virgil Abloh, will be up for bid.

Abloh designed the “Queen” collection for Nike in celebration of the standout athlete and the 50th anniversary of the Open back in 2018.

“We didn’t know the US Open would be her last appearance when we got these,” Wachter noted. “I think they’ll be one of the hottest items in the auction.”

Rafael Nadal’s Nike Air “Zoom Cage 3” sneakers — in black and purple and which he wore during the 2019 US Open’s quarterfinals against Diego Schwartzman — offer a glimpse of the tennis legend’s personality.

“A little detail that I love is on the left sneaker,” Wachter said. “There’s actually little marks here for 10, 13 and 17, for the [years of] the US Open championships he had won.”

After his quarterfinal win, the King of Clay conquered at Flushing Meadows one more time that year, adding to his total 22 Grand Slam titles.

The Los Angeles Lakers jersey worn by the late Black Mamba on his final ever opening day — a 112-111 loss to the Minnesota Timberwolves — is expected to fetch big bucks later this week. On that fateful October day in 2015, Bryant put up 24 points, 4 rebounds and 2 steals in his 29 minutes played.

“This is actually photo-matched to two games,” Wachter said, explaining that Bryant wore the jersey a few weeks later against the Denver Nuggets.

“Just the legacy that he has in the NBA and how missed he is as an athlete — it’s really just an honor to have this piece,” Wachter said.

Call it “The Greatest” item in the auction. The iconic velvet headgear Muhammad Ali sported ahead of his historic Thrilla In Manila fight against Joe Frazier in 1975 is also up for grabs. Ali wore the kufi as he paraded through the capital city of the Philippines and prayed at a local mosque prior to the Frazier bout. Ali won the brutal slugfest in 14 rounds — it’s considered to be boxing’s most memorable match.

“I think both fighters, by the end of that fight, were really barely standing. And this is an incredible relic from that time period and from that fight,” Wachter said.

University of Oregon track star Steve Prefontaine was called the “soul of Nike” by none other than founder Phil Knight — and the shoes worn by the 1970s running legend aren’t far behind. The special-made Nike “Oregon Waffle” sneakers — decked out in the school’s green and yellow — offer a poignant connection to their late owner, who died tragically in a car crash at 24.

“No other sneakers from Steve Prefontaine have ever appeared at market,” Wachter said. “So from a rarity perspective and the perspective of something that’s really important to the history of Nike, this is really as good as it gets.”

King James is finally bringing his talents to the Big Apple — sort of. Sotheby’s is auctioning off LeBron’s signed Nike “Zoom LeBron 3” sneaks, worn when he was a Cleveland Cavalier in the 2005-2006 season. They are an item that speaks to the four-time NBA champ’s grit, according to Wachter.

“He registered 34 points with these shoes, plus eight assists and three rebounds,” said Wachter.

The shoes are also inadvertently connected to another NBA relic — the now-defunct Seattle Supersonics, who faced LeBron and the Cavs for a December 2005 game. Apparently, they weren’t lucky shoes — the Sonics won, 115-108.

Start spreadin’ the news — Alex Rodriguez’s hat from the Yanks 2009 World Series win over the Philadelphia Phillies is up for grabs.

“I think this is exceptional, because A-Rod only won one World Series,” Wachter said. “Championship-clinching items have a particular level of rarity. So this is really something that exists at the highest level of collectability for this particular athlete.”

Dropped by Man United, Maguire becomes an issue for England

David Harbour shocked by Madonna calling him sexy before ‘creepy’…

Ireland ‘knows what it means to struggle for right to…