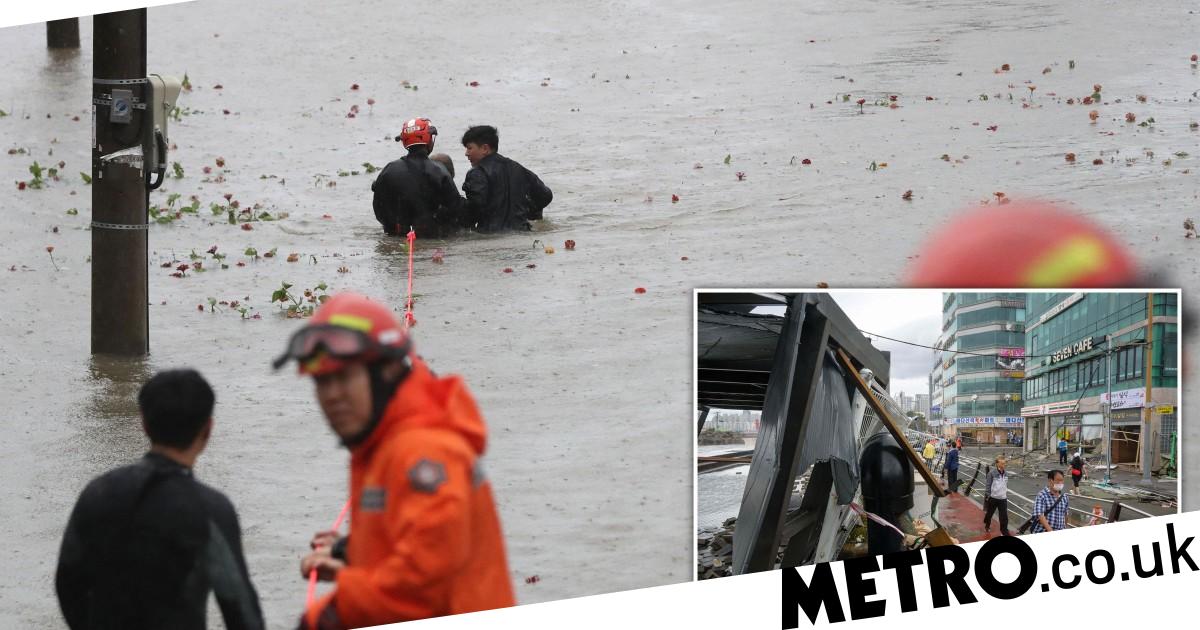 Two people trapped in a flooded underground car park have been rescued after 12 hours, after seven people died.

The two survivors relied on a pocket of air in the basement garage of the block of flats.

The two survivors in the car park were a man in his 30s and a woman in her 50s in Pohang.

The man had to cling to pipes to survive, while the woman climbed on to construction panels.

Residents cheered as rescue workers carried the pair out on stretchers.

They were in a stable condition last night, fire official Park Chi-min said.

Rescuers pulled the seven victims out from the car park, and they were given treatment but pronounced dead.

All were thought to have gone to the basement to move their cars amid the heavy storm.

President Yoon Suk-yeol offered condolences to those who lost loved ones in the typhoon and promised support for rescue operations and victims.

He said he was designating Pohang a special disaster zone eligible for tax breaks and government subsidies.

Hinnamnor is the most powerful typhoon to hit South Korea in years, and battered its southern region on Tuesday, dumping one metre of rain, destroying roads and felling power lines, leaving tens of thousands of homes without electricity, before weakening at sea.

The southern city of Pohang bore the worst of the destruction, with cars scattered on roads with their windows smashed or boots open, while an entire two-storey pool villa was uprooted from the ground and swept away in flash floods.

Troops were deployed to assist with rescue and restoration efforts, moving in armoured vehicles rolling through streets that turned into rivers.

Hinnamnor made impact just weeks after heavy rains in the region around the capital, Seoul, caused flooding that killed at least 14 people.

The new storm forced over 3,000 people to evacuate, with nearly 80 homes and buildings flooded or destroyed, and hundreds of roads, bridges and facilities damaged.

More than 600 schools were closed or converted to online classes.

U.S. to begin screening travelers coming from Uganda for Ebola