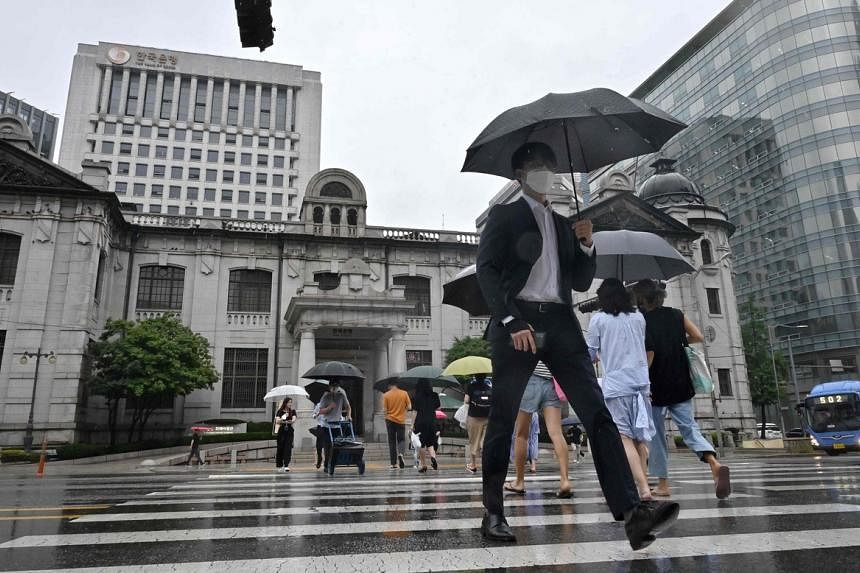 The economy expanded 0.7 per cent in the three months through June even as Russia’s war on Ukraine sent energy prices soaring and China’s lockdowns disrupted supply chains, Bank of Korea (BOK) data showed on Tuesday (July 26). The result exceeded economists’ forecasts, as did the 2.9 per cent annual rise in gross domestic product.

“It’s a surprise on an outburst of pent-up demand,” said Yoon Yeo-sam, an analyst at Meritz Securities. “The faster-than-expected growth allows the central bank to stay focused on controlling inflation led by demand.”

The result suggests the economy is weathering about a year-long tightening cycle and is likely to embolden policy makers to keep hiking to tackle inflation running at the fastest pace in over two decades. The BOK delivered its first-ever 50 basis-point hike on July 13 as it joins global counterparts in raising in larger increments to help keep inflation expectations anchored.

The report showed South Koreans boosted spending as the country emerged from the grips of the Omicron variant that weighed on the economy in the first three months of the year. Parliament also approved a record extra budget in May, aiding small businesses while keeping Covid-19 regulations relaxed.

Still, exports in real terms declined as the trade-reliant economy came under pressure from rising energy and commodity prices fueled by Russia’s war on Ukraine. Exporters also face the risk of global demand waning in response to the Federal Reserve and other central banks rapidly tightening policy.

Covid lockdowns in China – South Korea’s biggest export destination – have also damped demand and exacerbated supply chain disruptions. Semiconductors, South Korea’s key export, have been piling up fast in inventories even as shipments have held up.

Domestic consumers face a challenging environment as inflation erodes their purchasing power and the central bank keeps increasing borrowing costs. The won has been Asia’s worst performer after the yen this year, making imports more expensive for households and manufacturers.

However, President Yoo Suk Yeol plans to be conservative on stimulus spending after South Korea’s debt swelled under his predecessor Moon Jae-in.

While the GDP performance can’t be considered the first full scorecard for Mr Yoon, it does show the kind of economic momentum he has inherited and provides a yardstick for measures he needs to take.

Inflation is the key challenge for the administration, which took office in May, though it is also struggling to contain escalating labor disputes fueled by rising living costs and renewed Covid outbreaks.

Inflation topped 6 per cent in June for the first time in more than two decades and is forecast to remain elevated this quarter. The BOK sees prices this year growing 4.5 per cent – more than double its 2 per cent target – while estimating the economy will expand 2.7 per cent.

Resurgent Covid is another challenge, even though the government is confident the outbreak can be brought under control without derailing the economy. The BOK is also concerned at the potential for a wage-inflation spiral.

The consensus for growth this year among private-sector economists fell to 2.6 per cent this month. They also estimate a 25 per cent chance of a recession within a year.

Texas mom Christina Powell, 39, is found dead in her car at a strip mall