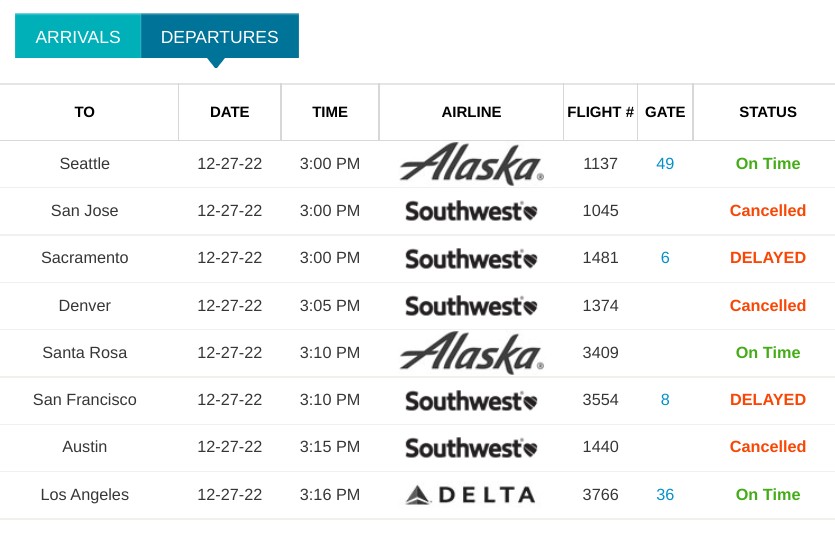 The departure board for San Diego International Airport makes it clear than almost all of the air travel problems now are due to Southwest Airlines‘ operational meltdown.

At 3 p.m. on Tuesday, the departure board showed Alaska, American, Delta and Spirit with on-time departures over the next two hours. But every Southwest flight was canceled or delayed.

To be fair, Alaska and Lufthansa also showed delayed flights, and a British Airways flight during the period was canceled, but all other travel problems involved Southwest, which has the most flights out of San Diego.

The problem according to multiple media reports is outdated technology that made it difficult for the budget airline to recover from the severe winter storm that pummeled the East Coast and Midwest.

“We had aircraft that were available, but the process of matching up those crew members with the aircraft could not be handled by our technology,” Southwest said told Reuters.

The airline said crew schedulers had to match planes with staff manually which it called “extraordinarily difficult.”

Southwest CEO Bob Jordan promised efforts to upgrade company’s systems in the wake of the meltdown.

The company relies on point-to-point service instead of operating out of large hubs like American in Dallas and Delta in Atlanta. This leaves Southwest staff vulnerable to being stranded during disruptions.

In addition, ground staff could not stay outdoors for long due to the risk of frostbite, crimping Southwest’s ability to fly, said Randy Barnes, president of TWU Local 555, a union that represents ramp, operations, provisioning and freight agents.

“Southwest is using outdated technology and processes, really from the 90s, that can’t keep up with the network complexity today,” said Casey Murray, president of the Southwest Airlines Pilots Association.

On Tuesday, Southwest had canceled 2,589 flights as of 11:25 a.m. or roughly two-thirds of its schedule. That was 30 times more than Spirit Airlines, which had the second-most cancellations.

Southwest said it would operate only a third of daily flights for the next several days in an effort to get back to normal. The airline promised to compensate stranded passengers.