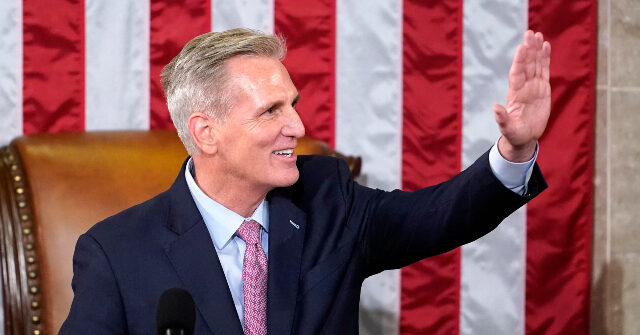 House Speaker Kevin McCarthy told Congress that the lead-up to his Speakership election made clear that he “never” gives up and would “never give up” on the American people during his first address as Speaker.

McCarthy addressed members of the House of Representatives as Speaker of the House for the first time in the early morning hours of Saturday after he secured the speakership on the 15th vote.

“That was easy, huh?” McCarthy joked after being introduced by House Democrat Leader Hakeem Jeffries (D-NY). “I never thought we’d get up here. Thank you, Minority Leader Jeffries. I gotta warn you, two years ago I got 100 percent of the vote from my conference.”

McCarthy also thanked the Clerk of the 117th Congress, Cheryl Johnson, for presiding over the chamber this week as House members voted multiple times to select a Speaker, before diving into his remarks.

“You know, my father always told me, it’s not how you start. It’s how you finish, and now we need to finish strong for the American people,” McCarthy said.

“If the son of a fireman and a grandchild of immigrants can rise to the highest position in the most important legislative body in our country. And if my colleague, Hakeem Jeffries, with his life story can rise to lead his party then opportunity and democracy still thrive in America,” he added.

McCarthy then pledged to Jeffries that their “debates will be passionate, but they will never be personal.”

Speaking directly to the American people, McCarthy promised to keep his commitment to America, which outlined several policies House Republicans would work to enact if they secured majority control of the lower chamber.

“A commitment for the future that’s built on freedom where children come first and are taught to dream big. Because in America, dreams can still come true. A commitment for our government that is held accountable, where Americans get the answers they want, need, and deserve,” he added.”

“Our system is built on checks and balances. It’s time for us to be a check and provide some balance the president’s policy,” McCarthy declared.

“You see, we believe government should be to help you not go after you,” McCarthy said. “We’re gonna pass bills to fix the nations’ urgent challenges. From wide open southern borders, to American-last energy policies, to woke indoctrination in our schools.”

McCarthy also pledged to take action against the Chinese Communist Party by creating a bipartisan Select Committee on China “to investigate how to bring back the hundreds or thousands of jobs that went to China.”

“Now, speaking of committees, we will hold the swamp accountable from the withdrawal of Afghanistan, to the origins of COVID, and to the weaponization of the FBI,” he pledged.

“Let me be very clear. We will use the power of the purse and the power of the subpoena to get the job done. This is something we should all agree upon. We will stand up and speak out for the backbone of our economy. The hard working taxpayer,” McCarthy continued.

“It’s nighttime here in Washington, but in some ways, it’s also like a new beginning. A fresh start, my friends, this chamber is now fully open for all Americans to visit.”

The newly-elected House Speaker also promised to hold one of the very first hearings at the Southern border as a way to “bring Congress to the people, because answers have not and will not always be found in Washington.”

McCarthy then gave a shout-out to his family members and thanked Members of the 118th Congress’ family members for standing by all week to watch their loved ones get sworn into office as the Congress elected a Speaker.

“For all the wives and husbands, children and parents who are watching a loved one to be sworn in, I knew it took a couple extra days. I’ll be honest it’s not how I had it planned,” McCarthy said. “I want you to remember this moment. Take it in. Your loved ones are about to make history.”

McCarthy talked about how his favorite room in the Capitol is Statuary Hall, where the House of Representatives initially met, because former President Abraham Lincoln once served in that chamber.

You know Abraham Lincoln gave his life and service to this country. One of his most important observations about America applies today, As much as it did 160 years ago. He said we are striving to maintain the government and institutions of our fathers and to transmit them to our children and our children’s children’s forever. My Fellow Americans, that is still our mission today. This moment calls for restoring trust within our country with each other. In that spirit.

He went on to talk about how Emanuel Leutze’s famous painting of former President George Washington crossing the Delaware River inspired him before promising to “never give up” for the American people.

“It is time for us to be the voice and worthy of their vote. Let me close with this. I may not know all of you, some of you are new. But I hope one thing is clear after this week. I never give up. I make this promise: I’ll never give up for you, the American people,” McCarthy said. “And I will never give up on keeping our commitment to America.”