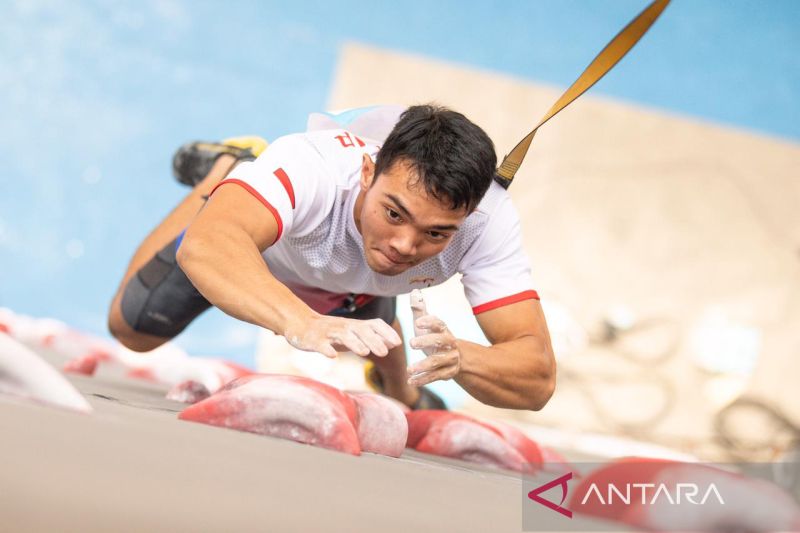 Hopefully, it can be maintained until the (implementation of the 2024) Olympics.

In the qualifying round of the men’s speed event, he climbed a 15-meter-high wall in 5.009 seconds.

“I am very happy. It (the achievement) happened because I had practiced hard. Thank you for all the prayers from the people. Hopefully, with this (achievement), Indonesian climbing (athletes) will be more successful,” he said in a written statement released on Saturday.

The record was bested the same day by his compatriot, Veddriq Leonardo.

He then posted a time of 5.10 seconds in the next series of the competition in Salt Lake City, the US, on May 27.

In the qualifying round of the next series hosted in Villars, Switzerland, he broke his own record twice on June 30, with a time of 5.09 seconds and then 5.04 seconds.

At the 2022 IFSC Climbing World Cup in Chamonix, France, he broke the world record for the fifth time to secure a place in the final round where he will compete with 15 athletes.

Head of the Indonesian Climbing Federation (FPTI), Yenny Wahid, who witnessed the athlete’s performance in person, lauded Katibin and said she was proud of his achievement.

“(I am) grateful, our athlete has made another brilliant achievement by breaking the world record on his own name, with a time of 5.00 seconds. We, the Indonesian delegates, are very proud of the achievement. Hopefully, it can be maintained until the (implementation of the 2024) Olympics,” she said.

The 2022 IFSC Climbing World Cup in Chamonix is taking place from July 8–10, and is being participated by athletes from 32 countries.