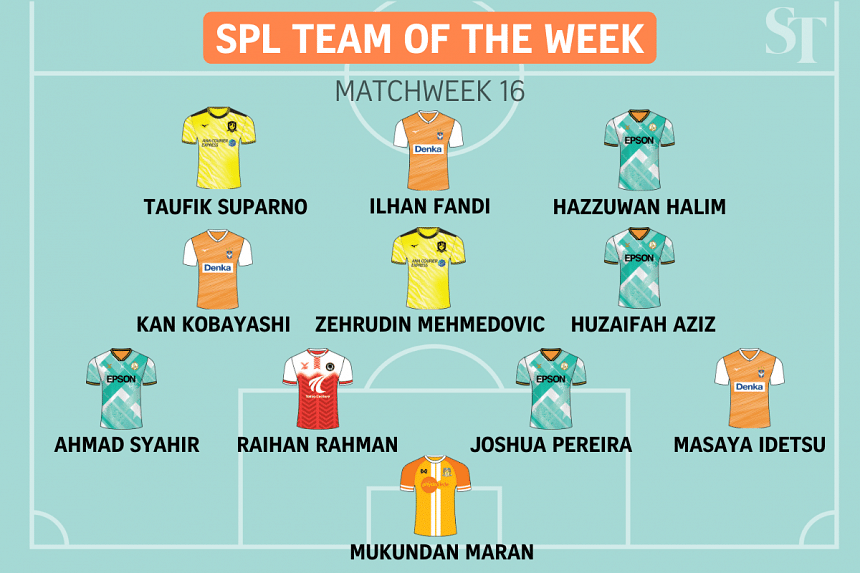 Mukundan Maran (Hougang United)
The Hougang goalkeeper was a pivotal figure in the Cheetah’s 2-2 draw with Tanjong Pagar United, helping his side stay in the game against the spritely Jaguars with several crucial saves in the first half.

Masaya Idetsu (Albirex Niigata)
The right-back grabbed two assists in  Albirex Niigata’s 4-1 win over Balestier Khalsa, delivering a free-kick for Kodai Tanaka to head in before finding Ilhan Fandi again for the fourth goal with a punted long pass.

Joshua Pereira (Geylang International)
Arguably the Man of the Match in Geylang’s heroic 1-1 draw with Lion City Sailors Sailors. Produced countless tackles with one particular last-ditch challenge in the penalty box – when a Lion City Sailors attacker was about to pull the trigger just in front of goal – the standout moment.

Raihan Rahman (Tanjong Pagar United)
Raihan showed why he is the Tanjong Pagar’s designated set-piece taker as he scored directly from a corner in the sixth minute to bag his first goal of the season. The defender also had a hand in the Jaguar’s second goal, which started from his free-kick.

Ahmad Syahir (Geylang)
Such was the attacking intent from the Geylang left-back that at times, he found himself as the furthest forward for his team. He also defended his flank superbly.

Kan Kobayashi (Albirex)
The midfielder controlled the game and provided an assist by setting up Ilhan for the opener. He was always the outlet for Albirex when they looked to create.

Huzaifah Aziz (Geylang)
The midfielder was physical and aggressive when he needed to be and calm on the ball when his side needed to hold on to possession.

Zehrudin Mehmedovic (Tampines Rovers)
The Serbian put in a Man-of-the-Match performance in Tampines’ 5-2  victory over Young Lions, which was their first win in six games. Mehmedovic assisted Boris Kopitovic for the opening goal, before adding one of his own later in the game.

Ilhan Fandi (Albirex)
The 19-year-old continued his fine form by scoring his first hat-trick in the Singapore Premier League, which included an outrageous bicycle kick that opened the scoring for Albirex. This is Ilhan’s seventh goal for Albirex in six games.

Taufik Suparno (Tampines)
He bagged a brace in the Stags’ 5-2 win but also stood out for his work off the ball and did not give the Young Lion defence any time on the ball.

Hazzuwan Halim (Geylang)
The forward was unlucky to have had a goal disallowed, but was lively in attack and earned Geylang the penalty that was converted by Sime Zuzul.