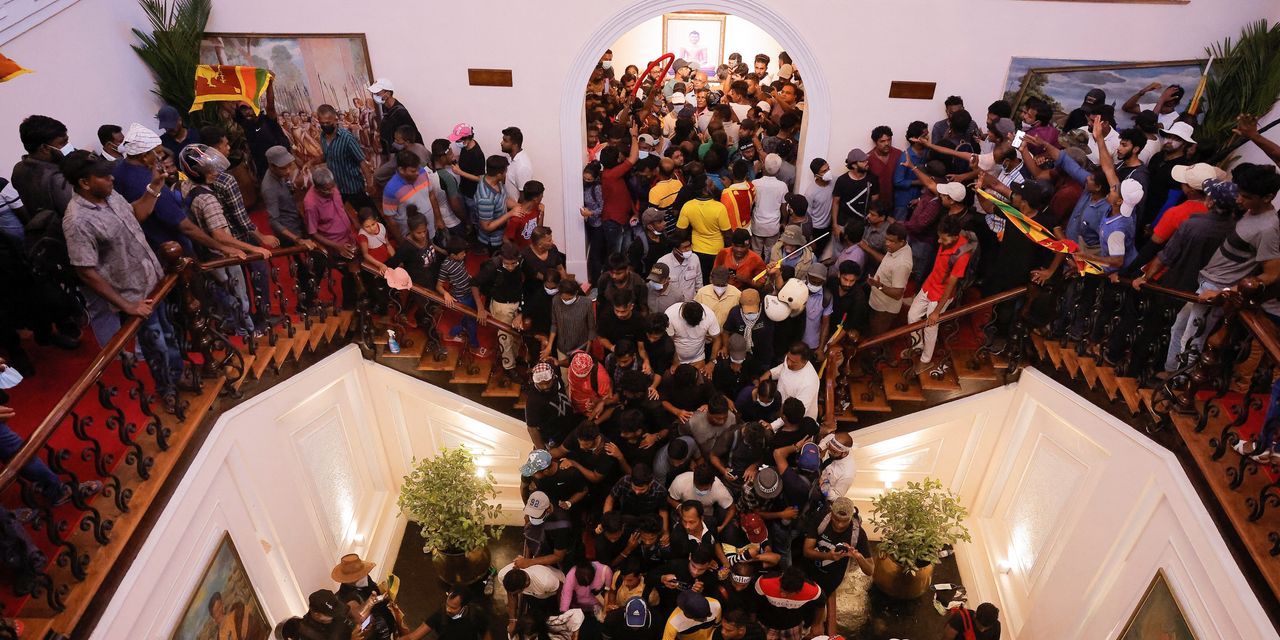 Sri Lankan Prime Minister Ranil Wickremesinghe said he would resign after just two months in office after protesters stormed and occupied the president’s residence and office amid public anger over the country’s deepening sovereign-debt crisis.

The resignation of Mr. Wickremesinghe, a political veteran serving his sixth stint as prime minister, comes after an emergency meeting of the country’s political party leaders to appoint an interim, all-party government. His resignation, he said on Twitter, would help “ensure the continuation of the government including the safety of all citizens.”

Braving tear gas and water cannons in the capital, Colombo, protesters—many waving the national flag and wearing helmets—also entered the president’s office on Saturday, in one of the largest antigovernment demonstrations in the country this year. Mostly peaceful demonstrations have been held daily outside the office since March.

Television news footage showed large crowds overrunning security barricades before breaching the official residence of President Rajapaksa. Some were later seen taking a dip in the compound’s swimming pool. Videos purportedly filmed by protesters and shared widely on social media showed scores of men rifling through drawers, sitting in chairs and lounging on a four-poster bed inside a bedroom of the residence. One man was shown doing bicep curls in a gym.

Mr. Wickremesinghe had been facing public calls for his resignation despite only replacing Mahinda Rajapaksa—the president’s brother—as prime minister in May. Protesters had also breached his official residence earlier on Saturday and had surrounded his private residence.

In the meeting, party leaders also demanded the immediate resignation of President Rajapaksa, whose family has dominated Sri Lankan politics for much of the past two decades. The leaders also resolved to hold early elections, according to opposition politicians. Before the meeting, the prime minister’s office said that the president would respect the decisions taken by the party leaders.

The political fallout is the culmination of months of public unrest. The South Asian nation’s wilting economy has seen Sri Lankans endure months of double-digit inflation, rolling power blackouts and severe shortages of fuel and medicine. Sri Lanka’s foreign reserves are depleted to the point that it can no longer afford to pay for essential imports and the country defaulted on its debt for the first time in its history in May. With queues outside gas stations snaking for miles around city blocks, authorities closed schools and restricted gas supplies to essential services to conserve fuel.

A personal, guided tour to the best scoops and stories every day in The Wall Street Journal.

Responding to calls by protest organizers to congregate in Colombo for mass demonstrations this weekend, Sri Lankans from far and wide improvised around acute fuel shortages by piling into semitrailer trucks, trains and overcrowded buses to reach the capital. Some walked miles to join the demonstrations. Protesters also converged around a cricket stadium in Galle, on Sri Lanka’s beach-lined southern coast, where the national team was taking on Australia in a test match.

Police had imposed a curfew in Colombo and other major urban hubs on Friday night but withdrew it on Saturday morning amid objections from lawyers and opposition politicians.

“He has become a curse of this country,” said Sarath Mendis, a 47-year-old engineer clutching the national flag outside the president’s office in Colombo. “My children do not have education because of this idiot.”

President Rajapaksa has defied intensifying calls to resign despite the country’s monthslong protests and worsening financial crisis. The crisis had forced the departure of several family members from public office, including his brother, who stepped down as prime minister after violent protests on May 9.

The brothers—who gained widespread popularity among Sri Lanka’s Sinhalese Buddhist majority for ending a decadeslong civil war in 2009—have been the focal point of mounting public outrage over their handling of the country’s economic crisis. That includes a decision to delay its approach to the International Monetary Fund for financial relief by months and instead banking on a recovery of its tourism industry, a key foreign currency earner that had been decimated by the pandemic. Sri Lanka’s government has since admitted its missteps and is in talks with the IMF.

In a statement on Friday, President Rajapaksa said fresh stocks of fuel and cooking gas would reach Sri Lanka by Tuesday and that negotiations with the IMF had been “very successful.” He urged Sri Lankans to “properly understand the current situation and act peacefully and intelligently.”

U.S. Ambassador to Sri Lanka Julie Chung on Friday urged people to protest peacefully and called for authorities to grant peaceful protesters the space and security to do so.

“Chaos and force will not fix the economy or bring the political stability that Sri Lankans need right now,” Ms. Chung said in a tweet. The United Nations also urged Sri Lankan authorities to show restraint and ensure every effort to prevent violence.

Nisantha Perera, a teacher from the central tea-growing region of Kandy, said he spent the previous night at a railway station as he made the early-morning journey to Colombo.

“The president must leave because he has brought such disrepute to our country,” he said. “So I am proud of being part of this protest to chase him out.”

Juliet Kaarbo: How global Scotland could punch above its weight