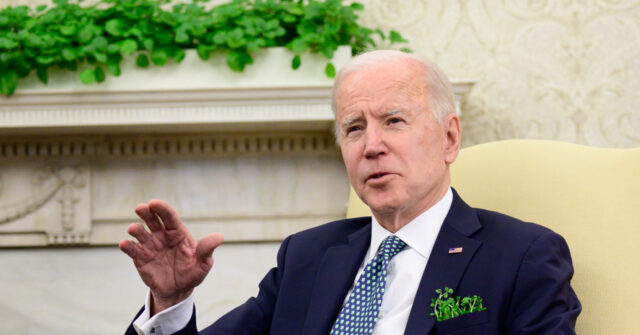 Leading British Brexiteers have called on U.S. President Joe Biden to abandon his plans to travel to Northern Ireland unless he is willing to put his anti-Brexit bias aside.

In his annual ‘State of Brexit’ address for the Bow Group former Secretary of State for Wales Sir John Redwood MP said that it is imperative that the American government realise that the Northern Ireland Protocol of the Brexit treaty between the UK and EU, which has essentially cut off Northern Ireland from the rest of the United Kingdom in terms of customs and regulations, is the central force damaging the Good Friday peace agreement.

“President Biden wants to come over on the anniversary of the Good Friday Agreement and celebrate it but there will be nothing to celebrate unless Stormont is meeting again and functioning,” Sir John said, Stormont being the colloquial name for Northern Ireland’s regional government.

“It cannot do so long as the EU is carrying on with the heavy-handed misinterpretation of the Protocol.”

“They must come to understand on the American side of the Atlantic, as we do, that it is the Protocol that is damaging the Good Friday Agreement,” Redwood explained.

He said that if the Democrats and President Biden “truly want to help they must understand the great damage that has been done to the Good Friday Agreement by the EU misinterpretation and mishandling of the Protocol.”

EXCLUSIVE: Bow Group Senior Patron Sir @johnredwood sets out what he wants to see the government do:

Bring on the freedoms!

Our priority must be to finish Brexit, take advantage of its opportunities, & put the people back in control👇 pic.twitter.com/lPEmzHHkNY

Speaking to Breitbart London, Bow Group chairman Ben Harris-Quinney said: “Like Obama and Pelosi before him, Biden and U.S. Democrats have sought to interfere outrageously in the Brexit process and in our domestic governance.

“Britain has never had a greater ally in the support of Brexit than Trump, or a greater foe in scuppering it than Biden. When Biden threatens to cancel his state visit to the UK unless we keep the NI Protocol, it sounds like the first trade deal he’s proposed we can get behind,” he quipped.

“We accept your terms, Joe. Stay at home and focus on your own country, your interference is unwelcome here.”

Much like his old boss, former president Barack Obama, who infamously weighed in before the Brexit referendum to warn Britons that they would be put to the “back of the queue” in terms of a trade deal should they vote to Leave the European Union, Biden has consistently opposed Brexit.

He has apparently honoured Obama’s threat, having so far rejected any major talks on a potential trade deal between Britain and America.

The American president is often accused of harbouring anti-British prejudices, and tends to highlight his Irish heritage and play down the fact that he is likely descended from English stock as well.

In his first phone call with newly appointed UK Prime Minister Rishi Sunak, President Joe Biden appears to have once again pushed the UK to sell out on Brexit. https://t.co/ok1bIoHt3O

Concerning the Northern Ireland Protocol in particular, Biden has consistently sided with the European Union.

The protocol was part of the Brexit deal negotiated by former prime minister Boris Johnson, under which Northern Ireland has been effectively cut off from the rest of the United Kingdom by internal trade barriers imposed by the European Union, which has been accused of imposing excessive custom checks compared to other border entry points in order to punish the British for Brexit.

This has led to widespread anger among the pro-British Unionists in the province, leaving the status of the regional government in limbo as politicians have been unable to form a government.

Ironically, despite Biden’s persistent claims that attempting to re-negotiate the protocol will endanger peace, he was apparently less concerned when the EU attempted to unilaterally impose a hard border between Northern Ireland and the Republic of Ireland in order to halt vaccine shipments to the United Kingdom — something the EU and its supporters insisted was unthinkable during the Brexit referendum and subsequent exit negotiations.

More recently, the Biden administration has been criticised for the appointment of former Joe Kennedy, the grandnephew of Irish-heritage U.S. President John F. Kennedy and controversial U.S. Senator Ted Kennedy, as special envoy to the British nation.

The move was criticised by Brexiteers over Kennedy’s apparent bias on the issue, as Kennedy previously worked for a pro-Irish American lobbying firm that advocated for the EU’s position on the Northern Ireland protocol in Washington.

Nevertheless, Sir John Redwood said that despite efforts from the United States, European Union, and indeed from EU loyalists at home, the Brexit movement is in a strong position, saying: “It turns out anyway that our trade is fine outside the EU, just as we thought it would be.”

However, the former policy advisor to Margaret Thatcher added that the current Conservative government could be doing more in the way of utilising newly-won Brexit freedoms to the country’s advantage.

“Taking back control is about using the freedoms we gained. That is why I am impatient for the government to do more,” he said, highlighting agriculture, fishing, and energy production as potential sectors of growth.

“We need to get on and make more of the changes that would be good for business and lives in the UK.”

Coco Gauff breezes into final of ASB Classic at Auckland

Prince Harry Claims He Had ‘Penile Frostbite’ During William’s Wedding