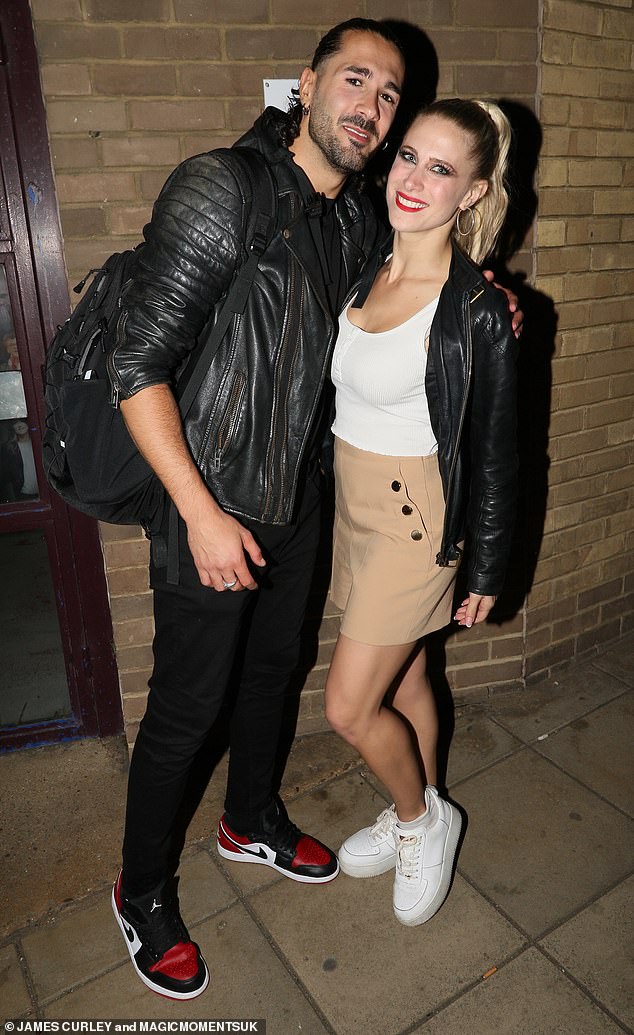 The 28-year-old dancer exchanged vows with Giada during a traditional Catholic ceremony in Sicily having previously postponed their wedding plans because of the COVID-19 pandemic.

I do: Strictly Come Dancing star Graziano di Prima has married his long-term love Giada Lini within the grounds of a 16th century Italian church

A select group of 200 guests attended the ceremony, among them fellow Strictly stars Nadiya Bychkova, Karim Zeroual and Chizzy Akudolu.

Graziano and Giada had originally planned to marry in 2020, only for their plans to be scuppered twice as a result of the coronavirus pandemic.

Speaking to OK! magazine, Graziano admitted the long awaited service prompted inevitable tears as he finally got to see his partner in her wedding dress.

He said: ‘I tried to be strong all day but I couldn’t stop crying because of the love I feel for Giada. When I saw her arrive in the horse and carriage I started to cry.

‘When she walked down the aisle towards me, I cried more. My mum was holding my elbow, squeezing it for support. It was more than I expected. I must have told her how beautiful she looked 50 or 60 times.’

He added: ‘The fact we were in Sicily, my town, after two years of postponing the wedding with all our family and our friends to witness – it was a feeling so strong.’

but had the wedding cancelled twice due to Covid – tied the knot in a 90 minute traditional Catholic service in front of 200 guests, which moved the couple to tears.

Graziano and Giada first met in 2014, and he admits he “fell in love instantly”.

The TV star – who grew up in Sicily – said: ‘I was watching everything around me as though I was 10 years old again when I used to live here, but I’m a man now and I’ve married Giada.

‘Since we met each other eight years ago, I knew she was the one – I fell in love instantly. She is the most extraordinary woman I have ever met.’

After the ceremony the newly married couple and their 200 guests moved on to 14th century Castle of Falconara, which boasts breathtaking views of the Mediterranean Sea

Reflecting on their special day, Giada revealed the castle was a symbolic location for the couple.

She said: ‘Graziano used to bring me to the castle gate when we first started dating and he didn’t have a car, only a Vespa.

‘I used to reach my hand inside the gate to see if we could get into the castle but it was always locked. We never imagined then that we’d have the money to rent it for our wedding.

‘Sicily was the perfect location to remind us of how it all began.’

Nationals Notebook: Avoiding a sweep but not rumors

Here come the Bosa brothers to wreck the Dolphins’ fun –…