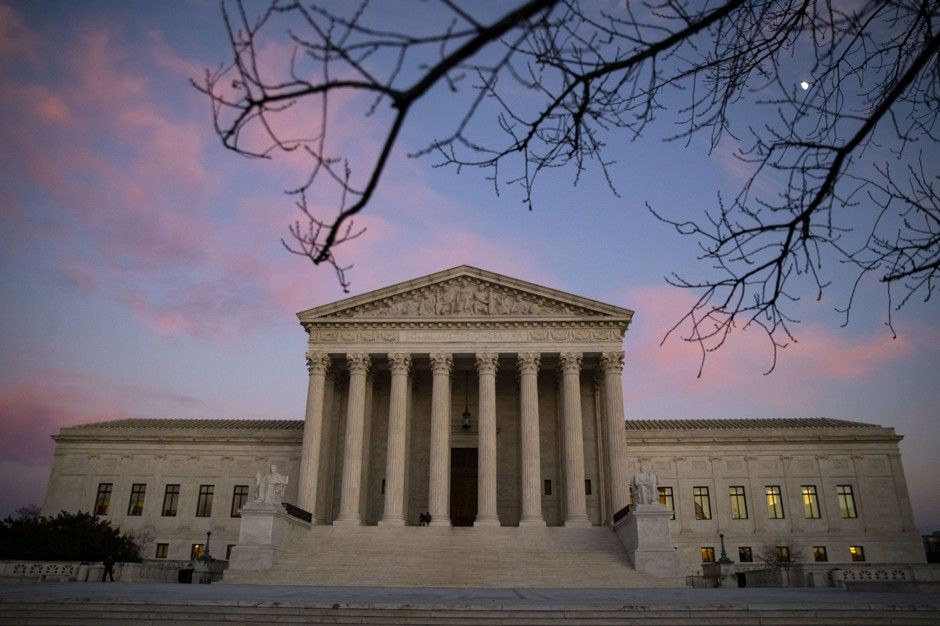 (Bloomberg) — The US Supreme Court ordered pandemic-era border restrictions to remain in effect, granting a request by Republican state officials who said lifting the rules would have produced an unmanageable surge of migrants.

Most Read from Bloomberg

Voting 5-4, the justices blocked a lower court decision that was set to invalidate the so-called Title 42 rule. The justices also said they will hear arguments in late February or early March on the states’ bid to intervene in defense of the policy.

The Supreme Court order means thousands of people waiting on the Mexican side of the border will remain stranded there for the time being. It’s a courtroom setback for President Joe Biden’s administration, which had urged the justices to let the policy expire.

The Title 42 rule lets the government quickly expel people, some of whom would be eligible for asylum, using the health emergency created by the spread of Covid 19.

“The current border crisis is not a COVID crisis,” Gorsuch wrote in an opinion joined by Justice Ketanji Brown Jackson. “And courts should not be in the business of perpetuating administrative edicts designed for one emergency only because elected officials have failed to address a different emergency. We are a court of law, not policymakers of last resort.”

The majority didn’t explain its reasoning, and two other dissenters, Justices Elena Kagan and Sonia Sotomayor, simply said they would have rejected the states’ request.

The order extends a temporary pause Chief Justice John Roberts imposed, keeping the border policy in place while the Supreme Court considers the intervention issue. The court said it won’t be directly considering whether the Title 42 rule is lawful.

The court also indicated the Biden administration could continue its effort to repeal the policy, a push that is at the center of a separate legal fight. A federal trial judge has blocked that effort, and the case is now before a different appeals court.

“Title 42 is a public health measure, not an immigration enforcement measure, and it should not be extended indefinitely,” White House Press Secretary Karine Jean-Pierre said in a statement. “We need Congress to pass comprehensive immigration reform measures like the ones President Biden proposed on his first day in office.”

The Department of Homeland Security said individuals who try to enter the US unlawfully will continue to be expelled to Mexico or their home country.

“People should not listen to the lies of smugglers who take advantage of vulnerable migrants, putting lives at risk,” DHS said. “The border is not open, and we will continue to fully enforce our immigration laws.”

The Supreme Court order came after the Senate voted last week against extending the restrictions as part of a $1.7 trillion omnibus spending package.

The restrictions have let the Trump and Biden administrations quickly expel people more than 2 million times since early 2020 amid an unprecedented tide of migrants and worries about the spread of Covid-19. Though Biden’s administration is seeking to end the policy, doing so would mean a fresh set of challenges, forcing him to manage a new influx at the southern border.

Although Title 42 is a public-health provision, many border hawks have come to see it as a necessary tool. In seeking Supreme Court intervention, 19 Republican attorneys general said a federal district judge’s order invalidating the policy would create a “crisis of unprecedented proportions” if the decision took effect.

Immigrant families are challenging the policy, telling the Supreme Court the restrictions are subjecting people who can’t enter the US to assault, torture, rape and murder.

“We continue to challenge this horrific policy that has caused so much harm to asylum seekers and cannot plausibly be justified any longer as a public health measure,” American Civil Liberties Union attorney Lee Gelerent said in a statement. The ACLU represents the families.

US District Judge Emmet Sullivan struck down the restrictions in November, saying the Centers for Disease Control and Prevention didn’t adequately explain a departure from past policy. A federal appeals court in Washington said the states waited too long to intervene so they could request a stay of Sullivan’s ruling.

The Biden administration took a mixed stance toward the policy in court. The Justice Department appealed the district court’s order but didn’t seek to keep the restrictions in place in the meantime.

The GOP-led states called the administration’s approach a “calculated and strategic surrender.” The states said lifting the restrictions would require them to spend more money on law enforcement and social services.

(Updates with statement from DHS in 11th paragraph.)

Most Read from Bloomberg Businessweek