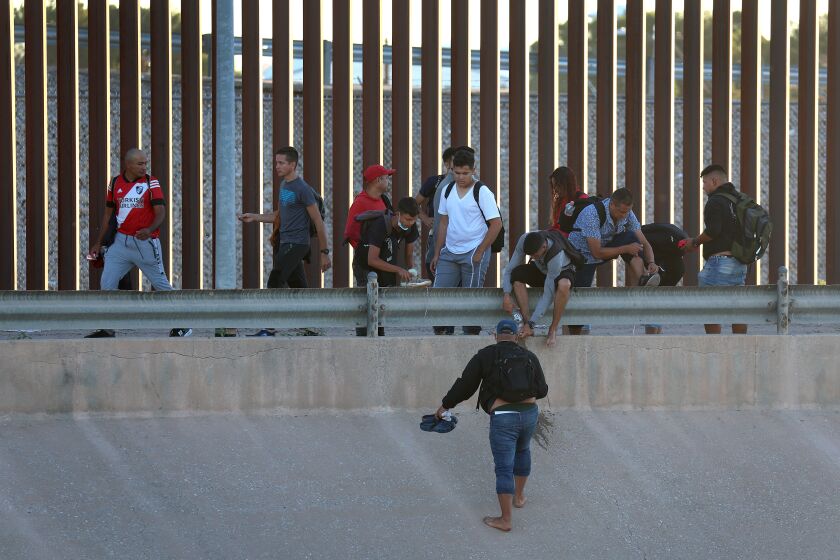 A divided Supreme Court refused Tuesday to lift the Trump-era rule that has turned away migrants at the border as a public health threat.

By a 5-4 vote, the justices granted an appeal from Arizona and 18 other Republican-led states that sought to keep Title 42 in place to prevent a new surge of migrants who seek to apply for asylum.

The court agreed to hear arguments in February from the GOP states, but its order said it did not “prevent” the Biden administration from taking steps to limit the disputed policy.

But the White House conceded its options are limited.

“The Supreme Court’s order today keeps the current Title 42 policy in place while the court reviews the matter in 2023. We will, of course, comply with the order and prepare for the court’s review,” said White House Press Secretary Karine Jean-Pierre.

Last month, a federal judge in Washington set aside the Trump rule adopted in March of 2020, holding it can no longer be justified now that the pandemic has faded. His decision would have lifted Title 42 and gave hope to thousands of migrants who had come to the U.S.-Mexican border anticipating they would be able to make a claim for asylum.

But the court on Tuesday blocked that decision from taking effect.

“This stay precludes giving effect to the District Court order setting aside and vacating the Title 42 policy; the stay itself does not prevent the federal government from taking any action with respect to that policy,” the court said in an unsigned order.

The majority, led by Chief Justice John G. Roberts Jr., did not explain the decision. But Gorsuch faulted the majority for relying on the COVID pandemic to justify a strict policy at the border.

The “current border crisis is not a COVID crisis. And courts should not be in the business of perpetuating administrative edicts designed for one emergency only because elected officials have failed to address a different emergency. We are a court of law, not policymakers of last resort,” he wrote in a dissent joined by Jackson.

The court’s order dashes the hopes of migrants who fled Venezuela, Cuba, Haiti, Nicaragua and other countries that are beset by chaos and political turmoil. Prior to March of 2020, migrants could apply for asylum, but the Title 42 rule allows them to be turned away before doing so.

Lee Gelernt, an attorney with the ACLU who led the lawsuit against Title 42, said that keeping “Title 42 will mean more suffering for desperate asylum seekers but hopefully this proves only to be a temporary setback in the court challenge.”

The Biden administration told the court that it was prepared to send more agents to the border to screen migrants who seek asylum and to turn back those who cannot show they are fleeing persecution.

However, the GOP states predicted a “crisis of unprecedented proportions at the border” if Title 42 is lifted.

The government concedes it does not have the space to detain the tens of thousands of migrants who pass the initial screening, and they are usually released until their hearing is scheduled before an immigration judge. That process usually takes many months or even several years.

The Department of Homeland Security said in a statement that “the Title 42 public health order will remain in effect and individuals who attempt to enter the United States unlawfully will continue to be expelled to Mexico or their home country. People should not listen to the lies of smugglers who take advantage of vulnerable migrants, putting lives at risk. The border is not open, and we will continue to fully enforce our immigration laws.”

Until today, most of the court’s conservatives have been skeptical of the government’s use of the pandemic to enforce broad changes in the law. For example, they struck down a Biden administration rule that put a moratorium on housing evictions, and they stalled his student loan forgiveness plan, which was justified as a response to the pandemic.

But only Gorsuch voted to end the reliance on a pandemic-based policy at the border.

Title 42 is a provision in the public health law that dates to 1893 and the effort to prevent the spread of cholera. As amended in 1944, the law authorized the surgeon general to prohibit…the introduction of persons or property” from countries where contagious diseases are rampant.

President Trump declared COVID-19 to be a national emergency, and the White House ordered the Centers for Disease Control to authorize barring entry by “non-citizens” who arrived at the border without visas or other proper documents.

That rule has remained in effect, even as the pandemic has waned and President Biden replaced Trump.

Last month, however, a federal judge in Washington set aside the rule and held the COVID-19 pandemic could no longer justify preventing migrants from claiming asylum. Judge Emmet Sullivan agreed to a five-week delay before his ruling took effect. He set Dec. 21 as the deadline.

The U.S. appeals court in a 3-0 decision refused to lift the deadline.

In response to the appeal from Arizona and the 18 other GOP states, Roberts issued an “administrative stay” on Dec. 20 to put the matter on hold for a few days so the full court could decide.

The case was Arizona vs. Mayorkas.

Inside the Trump Campaign’s Plan to Take Down Nikki Haley