Supreme Court to Decide if States Can Protect Title 42 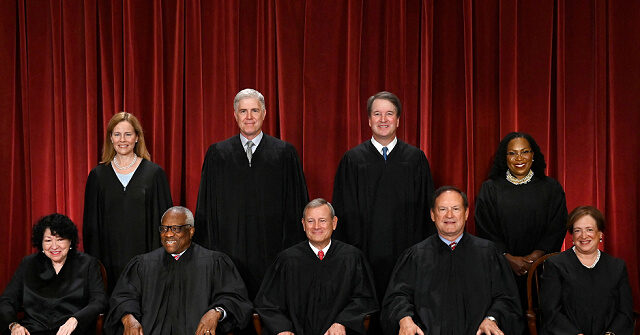 WASHINGTON, DC – The Supreme Court will hear arguments on whether states can ask courts to preserve Title 42 border safeguards when the Biden administration tries to let the policy die, voting on Tuesday to leave the Trump-era policy in place until it hands down a decision in the case by early summer 2023.

Title 42 allows federal agents to turn away illegal aliens immediately without taking them into custody if the agent believes the alien might have Covid-19. Even though the number of illegal crossings is at an all-time high, the numbers at the border would be up to double their current levels without that policy in place.

With President Joe Biden’s clear support, Homeland Security Secretary Alejandro Mayorkas has called for an end to the border control policy, but the Biden administration has not gone through the legal process to end the CDC measure. Instead, when leftwing groups sued to end the program, Attorney General Merrick Garland decided not to appeal a lower court ruling against the policy, which would have the effect of ending Title 42.

But 19 states filed a motion to intervene in the case, asking the courts to allow the states to step into the shoes of the Biden administration to defend the policy and to issue a stay of a federal trial judge’s ruling declaring Title 42 unlawful.

Chief Justice John Roberts referred the matter to the full Supreme Court for a vote. The justices on Tuesday decided to grant the stay by a 5-4 vote. The justices also voted to review the case, setting the case for argument at the end of February.

The sole issue the Supreme Court will decide is whether the 19 states have standing to intervene in court to defend the policy. If the states do, then the matter will go back to the D.C. Circuit appeals court for the states to pursue an appeal. If they do not, then Title 42 will end.

Gorsuch dissented on grounds that would resonate with many Republicans, however, noting that Title 42 is based on the Covid-19 public health emergency, opining that “It is hardly obvious why we should rush in to review a ruling on a motion to intervene in a case concerning emergency decrees that have outlived their shelf life.”

“And courts should not be in the business of perpetuating administrative edits designed for one emergency only because elected officials have failed to address a different emergency,” Gorsuch added. “We are a court of law, not policymakers of last resort.”

The case is Arizona v. Mayorkas, No. 22-592 in the Supreme Court of the United States.

Breitbart News senior legal contributor Ken Klukowski is a lawyer who served in the White House and Justice Department.

Was your travel disrupted? Here’s what you’re owed — and what you won’t get