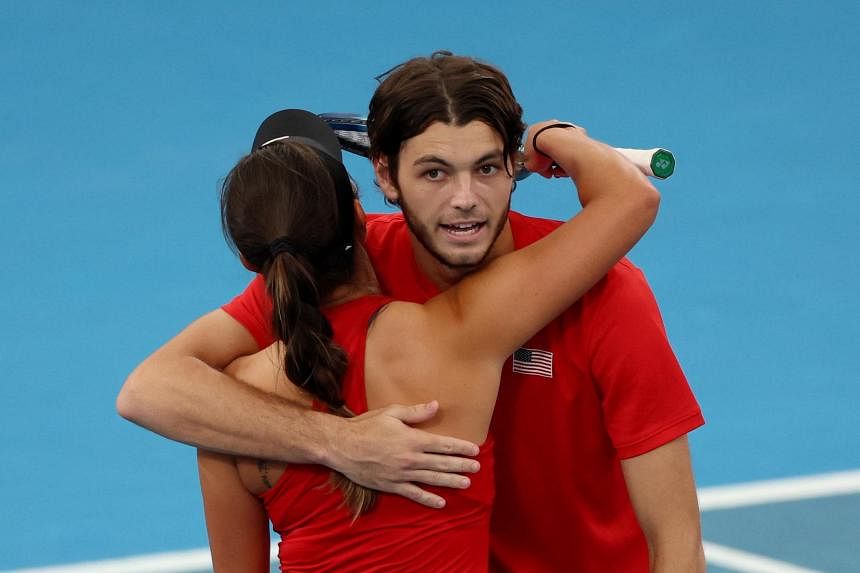 SYDNEY – A tenacious Taylor Fritz pulled off a 7-6 (7-5), 7-6 (7-5) win over Poland’s Hubert Hurkacz on Saturday, as the United States completed a 5-0 sweep to reach the final of the United Cup mixed-team tournament where they will square off against Italy.

The Italians booked their place in Sunday’s title clash of the inaugural US$15 million (S$20 million) event after taking an unassailable 3-1 lead in their semi-final against Greece.

The red-hot Americans had made a strong start having gone ahead 2-0 on Friday as Jessica Pegula and Frances Tiafoe scored convincing wins and world No. 9 Fritz held his nerve to finish the job against Hurkacz.

“It was great to get the win today to get us through. I had no doubt that if I were to lose that the rest of the team would have come through,” he said.

“But I’ve played with Team US a lot. I think it’s a huge advantage this time having the girls on our team because it just makes the whole team so much stronger.

“I’m super excited going into the final and I think we’ve been the favourites all week.”

The Indian Wells champion saved two set points while down 5-4 in the opening set as Hurkacz faltered and the American took the lead in the match when his opponent made another error at the end of a tight tiebreak.

Fritz, who won 88 per cent of his first-serve points, needed a big serve to hold for 6-5 in the second set before claiming the win in another tense tiebreak.

Italy went into their clash with Greece holding a 2-0 lead after Martina Trevisan and Lorenzo Musetti won their matches but Stefanos Tsitsipas reduced the deficit with a thrilling 4-6, 7-6 (7-2), 6-4 win over Matteo Berrettini.

But Lucia Bronzetti ensured there was no late Greek comeback by getting past Valentini Grammatikopoulou 6-2, 6-3 to send Italy into Sunday’s final.

Elsewhere, qualifier Linda Noskova continued her giant-killing run at the Adelaide International 1, as the 18-year-old toppled ailing world No. 2 Ons Jabeur 6-3, 1-6, 6-3 to set up a final against second seed Aryna Sabalenka.

Sabalenka will look to stop the youngster in the title decided on Sunday after she made short work of Irina-Camelia Begu, sealing a 6-3, 6-2 victory.

In the men’s semi-finals, Novak Djokovic built up the momentum ahead of his quest for a 10th Australian Open title by defeating Daniil Medvedev 6-3, 6-4.

The Serb will face Sebastian Korda, who was leading 7-6 (7-5), 1-0 in the other last-four clash when Japan’s Yoshihito Nishioka called for a medical timeout before pulling out of the match. REUTERS, AFP

Jio True 5G launches in Rajasthan: These cities are getting 5G network first