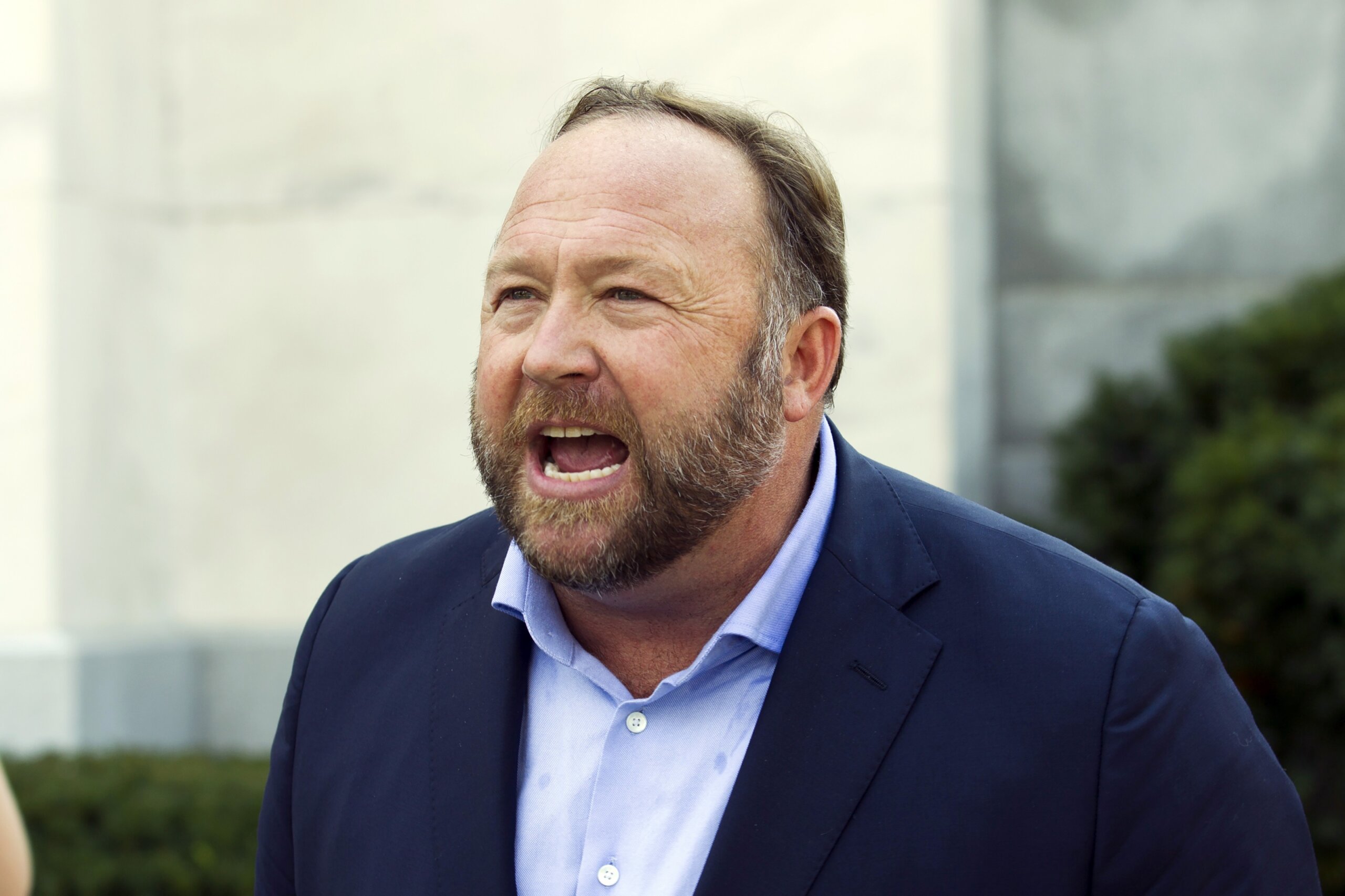 A Texas jury will hear the first testimony Tuesday in a civil lawsuit to decide how much Infowars host and conspiracy theorist Alex Jones must pay Sandy Hook Elementary School parents for falsely telling his audience that the deadliest classroom shooting in U.S. history was a hoax.

AUSTIN, Texas (AP) — Testimony is set to begin Tuesday in a Texas lawsuit to decide how much Infowars host and conspiracy theorist Alex Jones must pay Sandy Hook Elementary School parents for falsely telling his audience that the deadliest classroom shooting in U.S. history was a hoax.

The jury could deal Jones a major financial blow that would put his constellation of conspiracy peddling businesses into deeper jeopardy. He has already been banned from YouTube, Facebook and Spotify for violating their hate-speech policies and he claims he’s millions of dollars in debt — a claim the plaintiffs reject.

The trial involving the parents of two Sandy Hook families is only the start for Jones. Damages have yet to be awarded in separate defamation cases for other families of the 2012 massacre in Newtown, Connecticut.

Jones was in the courtroom Tuesday after not attending jury selection on Monday. His attorney said Jones has a “medical issue” that might keep him away from some of the scheduled 10-day trial, but he didn’t elaborate.

Jones arrived at the courthouse wearing a piece of silver tape over his mouth with the message “Save the 1st” printed on it — a reference to the First Amendment right to free speech. He removed it before entering the courtroom.

To take his seat at the defense table, Jones walked directly behind Neil Heslin and Scarlett Lewis, the parents of 6-year-old Jesse Lewis, who was one of the 20 first graders and six educators who were killed at Sandy Hook. Heslin and Lewis were escorted by plainclothes security to the courthouse and to the courtroom.

The lawsuits do not ask jurors to award a specific dollar amount against Jones. But in questioning the jury pool on Monday, attorneys for the families suggested they could seek $100 million or more in compensatory and punitive damages.

Opening statements and testimony were set for Tuesday before the 12 jurors and four alternates who were selected Monday from a jury pool of more than 100.

Initial testimony Tuesday is expected to include Daniel Jewiss, who was the Connecticut State Police lead investigator of Sandy Hook, and Daria Karpova, a producer at Infowars.

In questioning the jury pool, Jones’ attorney Andino Reynal acknowledged that Jones is a “very polarizing” and “controversial” figure, but he also said he’d ask the jury to cap the damages at $1.

During jury selection, most in the jury pool raised their hand when asked if they had heard of Jones, and nearly two dozen agreed when Reynal asked who among them had a “firm negative impression” of him.

“We’re very happy with the jury we’ve seated,” Reynal said. “It’s a very important First Amendment case. On trial right now is not just people’s freedom of speech, but it’s also people’s freedom to listen. To choose what they watch on television, to make those choices for themselves, instead of having a personal injury lawyer make those choices for them.”

Courts in Texas and Connecticut have already found Jones liable for defamation for his portrayal of the Sandy Hook massacre as a hoax involving actors aimed at increasing gun control. In both states, judges have issued default judgements against Jones without trials because he failed to respond to court orders and turn over documents.

In total, the families of eight of the Sandy Hook victims and an FBI agent who responded to the school are suing Jones and his company, Free Speech Systems.

Jones has since acknowledged that the shooting took place. During a deposition in April, Jones insisted he wasn’t responsible for the suffering that Sandy Hook parents say they have endured because of the hoax conspiracy, including death threats and harassment by Jones’ followers.

Jones claimed in court records last year that he had a negative net worth of $20 million, but attorneys for Sandy Hook families have painted a different financial picture.

Court records show that Jones’ Infowars store, which sells nutritional supplements and survival gear, made more than $165 million between 2015 and 2018. Jones has also urged listeners on his Infowars program to donate money.

The Texas trial begins about two months after a gunman killed 19 children and two teachers at Robb Elementary School in Uvalde, which is about 145 miles (235 kilometers) southwest of Austin. It was the deadliest school shooting since Sandy Hook.