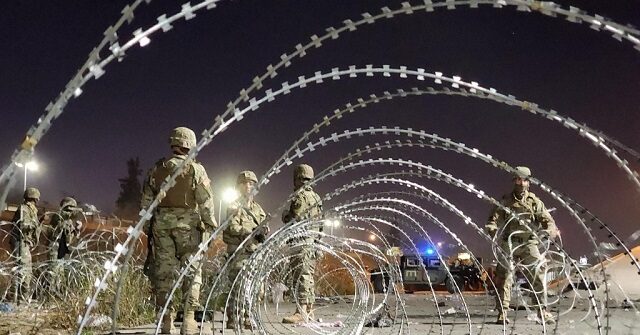 While most families across the country celebrated the extended Christmas holiday weekend, members of the Texas National Guard built more than two miles of razor-wire border fencing near El Paso. Texas Governor Greg Abbott deployed the Guardsmen under Operation Lone Star to build the barriers after the City of El Paso declared a disaster as migrants surged across the border.

The Texas Military Department tweeted a video on Christmas Day showing the National Guard building a triple-strand concertina barrier “to secure the area from illegal crossings.”

This morning, service members deployed to El Paso, Texas constructed a triple-strand concertina barrier near the border to secure the area from illegal crossings. pic.twitter.com/X6JUkr9iQV

The general described the logistics of the operation with the Texas Air National Guard airlifting 400 soldiers and equipment to El Paso in four C-130 aircraft on Saturday morning.

The Texas Guard is using C-130J aircraft to move 200 additional personnel and 40 HMMWV to expand operations in the El Paso.
The Texas National Guard is expediting the flow of additional forces to ensure rapid support to the border. Read more: https://t.co/5H3SnsJhJe pic.twitter.com/DEzuZw1n9a

The soldiers went to work at 4 a.m. to string the triple-level wire along the riverbank in El Paso. By Tuesday morning, the soldiers erected more than two miles of the barrier, CNN reported. Texas Military Department officials told the news outlet they will build more in the coming days.

During the past week, Border Patrol officials released nearly 6,000 migrants to NGO’s in El Paso or onto the city’s streets, according to the city’s Migrant Situational Awareness Dashboard. More than 10,000 were released the week before.

All sectors along the border are increasing their response posture to protect Texas against the flood of migrants and cartel activity streaming into our state. pic.twitter.com/XMoZFPH5Ft

In other locations along the border, the state expanded its use of shipping containers to extend border barriers.