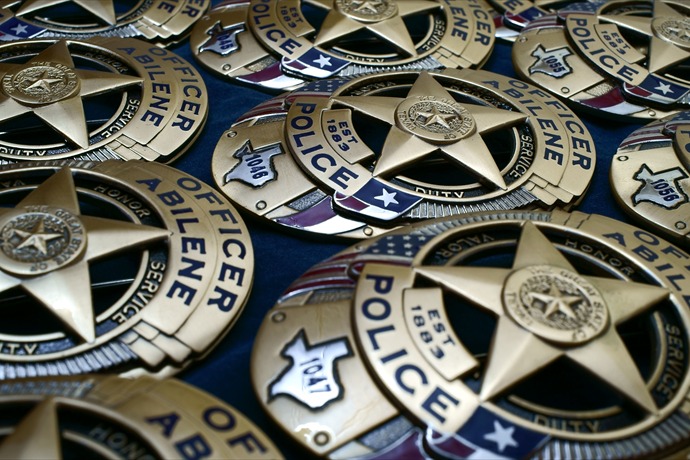 ABILENE, Texas (KTAB/KRBC) – An Abilene police officer was given extended leave because she is still suffering from PTSD after being stabbed repeatedly in the head and face while in the line of duty more than 2 years ago.

After a close vote of 4-3, city council members decided to give 4 additional months of 100% line of duty pay to Officer Mary Guitar, who was injured while on a robbery call in March 2020.

Officer Guitar was one of two officers who responded to the robbery at a convenience store on the 2400 block of S 1st Street.

When she arrived on the scene, her attorney Zac Horn says Officer Guitar saw a 6’3″ suspect, later identified as Lebarron Ballard, on top of the other officer, punching him in the face, so Officer Guitar deployed her Taser.

This did not disarm Ballard but instead caused him to charge Officer Guitar, and when she tried to shoot him, he ran into her gun and jammed it.

While she was trying to make sure her gun was secure, Ballard pinned her to the ground and began stabbing her in the head and face repeatedly. Horn says Officer Guitar remembers feeling the stabbing getting slower and slower until it stopped.

The other responding officer was able to shoot Ballad, and he later died at the hospital. Both Officer Guitar and the other officer were hospitalized as well.

In the months following the incident, Officer Guitar was given the Abilene Police Department’s Shield award and her stab wounds healed, but Horn says the emotional impact is still there and that Officer Guitar still deals with PTSD to this day.

Officer Guitar first returned to desk duty with the Abilene Police Department in May 2020, just two months after the stabbing, but by November 2020, APD learned that she was experiencing substance abuse issues and sent her to a treatment facility.

She then returned for a second time in February 2021 and by May 2021, she was back in the field with a training officer.

However, while she was in the field in May and June, APD noticed she was expressing a high level of frustration with other officers. Her training officer also said she suffered panic attacks, could not drive the patrol car, and was distracted. This officer also said Officer Guitar admitted to relapsing and was detoxing at the station, even throwing up while on duty.

Because of these issues, Chief Marcus Dudley decided to put Officer Guitar back on desk duty in June 2021 but she was still relapsing, and a family member advised she was unable to come to work one day because she overdosed on cough syrup.

Officer Guitar was then officially placed on administrative leave July 29, 2021, to begin the ‘fitness for duty’ process, and when Chief Dudley tried to bring her into the office for a follow-up on August 3, she refused, so an officer had to go to her home. This officer reported she was behaving like someone who was dealing with an addiction, such as fidgeting a lot and rambling.

From August 2021 through October 2021, Officer Guitar underwent substance abuse treatment and the fitness for duty process, which determined she was not fit for duty.

However, her administrative leave had been fulfilled because she had been paid to not work for 17 months and had been on desk duty for 11 months.

Chief Dudley did request council members deny her request for a 4-month extension of line of duty leave.

“I am not comfortable under the circumstances with accepting that in another four months, things will be different,” Chief Dudley said when asked by the council for his expert opinion.

Officer Guitar’s attorney, Horn, responded by saying, “I was pretty stunned by the chief’s presentation, and I am really glad its recorded for everybody to see”

Horn is confident she will be fit for duty in four months and that during the fitness for duty process, a physical doctor said she was physically fit for duty but two psychologists determined she was not fit for duty right now but may be able to resume light duty in a few months.

Most of the votes on both sides came after a lot of pause, indicating this was a difficult decision for council members to make.

City Manager Robert Hanna says the amount of salary and benefits covered with the four-month extension equals about $35,000.

‘This is the sh*t that money can’t buy’: Ferne McCann gets sentimental in post about Lorri Haines

Keir Starmer’s Week: I’ll not be singing ‘You don’t get me I’m part of the union’