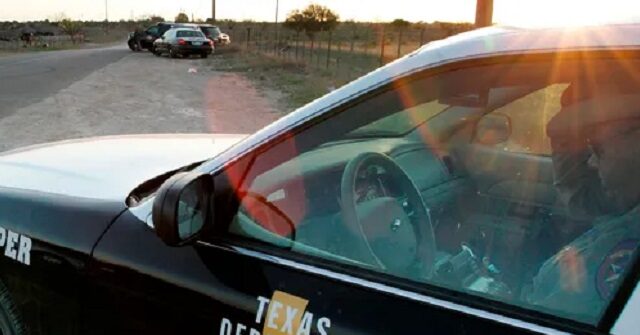 A Texas Department of Public Safety trooper heard gunfire after a foot pursuit of migrants and a human smuggler onto a ranch near the border. The gunfire was heard after a high-speed chase on Christmas Eve.

Texas DPS South officials tweeted a report regarding a pursuit of a human smuggler and a group of migrants on Christmas Eve. The trooper initiated a pursuit in Kinney County after an alleged human smuggler refused to stop their vehicle.

A Trooper heard what sounded like gunshots coming from the brush area. Several weapons were found in the brush. A perimeter has been set involving local, county, & federal agencies. The suspect remains at large & all occupants are considered to be armed & dangerous. 2/x

The driver and a group of migrants bailed out and fled into the brush. DPS spokesman Lt. Chris Olivarez told Breitbart Texas the trooper pursued the group until she heard multiple gunshots. She did not see the gunfire, nor did she believe to have been the intended target of the shooter.

The trooper broke off the foot pursuit and called for backup. Multiple law enforcement agencies, including two helicopter aircrews, responded and established a perimeter.

Despite the response, the suspected human smuggler and migrants eluded apprehension. The search of the area led to the discovery of two handguns.

⚠️ BE ALERT!
We have seen a drastic increase in loaded firearms being carried by human smugglers. Never get complacent and always approach with caution! Stay safe out there and remember you have a family to go home to at the end of your shift!#USBP #BorderPatrol#HonorFirst pic.twitter.com/Mzh9Xz14jw

Olivarez told Breitbart the truck driven by the suspected smuggler is reported to be stolen out of Houston. Investigators are dusting the vehicle for prints and other evidence that might lead to identifying the smuggler.

Officials report the suspected smuggler is considered to be armed and dangerous and cautioned residents to avoid the area.

What Kind of a Society Gladly Cuts Off Healthy Breasts and Genitals of Teens? A Sick Society – The Published Reporter®