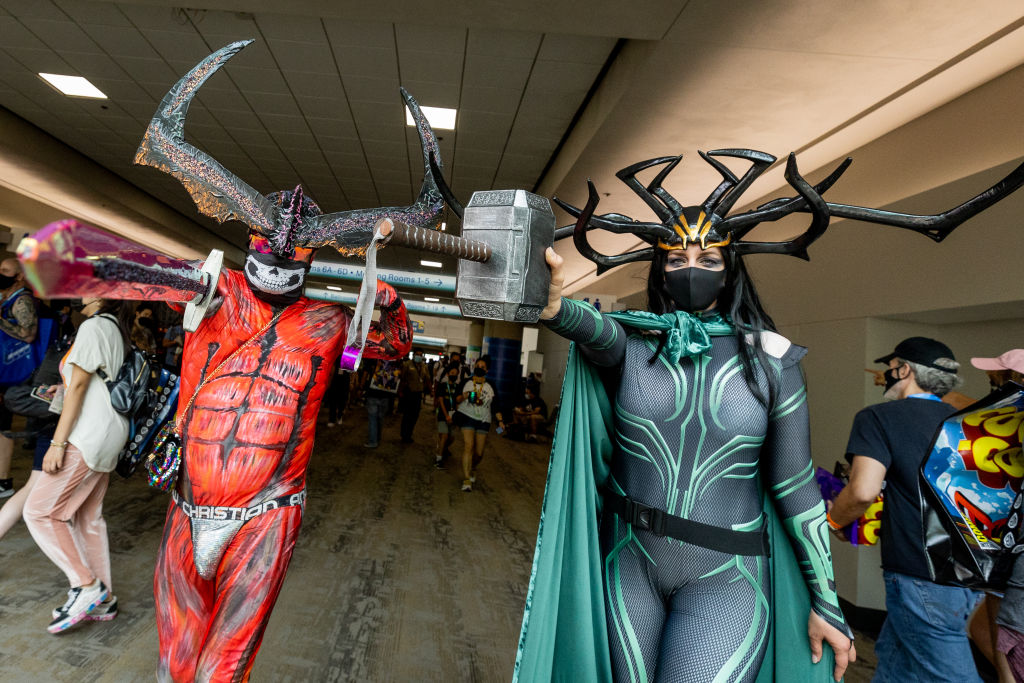 San Diego Comic-Con is back after a two-year absence and better than ever. The revered convention came back with a punch, presenting first-looks at exciting projects like Dungeons & Dragons: Honor Among Thieves, Black Panther: Wakanda Forever, and more. The convention also featured jaw-dropping announcements, including the announcement of Marvel’s entire slate for Phase 5.

A vital part of SDCC is the cosplays. Indeed, it’s part of the convention’s DNA, granting it a vibe of fantasy that makes it a unique experience for fans and pop culture fiends. The event has already given us some incredible cosplay throughout the years, and 2022 included several worthy entries that might make it to the all-time hall of fame. From superheroes to characters from anime and books, the cosplays at the 2022 edition were perfect representations of modern entertainment and the ideal reminders of why San Diego Comic-Con is still the pinnacle of pop culture.

You either die a hero…

Or live long enough to wear an awesome costume at Comic-Con. Batman and Joker are eternal rivals, soulmates even; the two share a contentious but addictive relationship, completing each other. Fans love to explore their connection, and this mashup of both characters is a stroke of genius! The makeup is a spot-on replica of the late Heath Ledger’s in The Dark Knight, and the graffiti in the Batsuit is an excellent touch!

Cruella is arguably the best live-action adaptation of a Disney classic, thanks mainly to Emma Stone’s electrifying performance. The costumes in the film are equally stunning, and the fact this cosplayer managed to replicate one of the most memorable ones is nothing short of impressive. The cosplayer looks remarkably like Emma Stone, which only elevates the illusion.

You have no idea what’s possible

Hela is still one of the best villains in the MCU, second only to Thanos. Flamboyant and undeniably powerful, Hela is already iconic. This cosplayer put on her mean face and walked into SDCC as the Goddess of Death, complete with Hela’s iconic headgear and a replica of Mjolnir from Thor: Ragnarok. Her companion going as Surtur was the cherry on top of a perfect cosplaying cake.

Kang, the Conqueror, is the MCU’s next big bad. Introduced in Loki and played by the incredibly talented Jonathan Majors, Kang is bound to make an impression on fans. This cosplayer took advantage of the character’s renewed popularity and made an impressive replica of his iconic costume. Every detail is perfect, but the makeup and helmet are especially impressive.

Tygra from Thundercats and Wolverine from X-Men are two of the coolest feline-inspired characters in entertainment. The chances of them ever meeting in the comics or movies are slim to none, but these two cosplayers took matters into their own hands and made it happen! That’s what makes Comic-Con so great: it gives us crossovers we wouldn’t get any other way.

Danny DeVito’s take on the Penguin in Tim Burton’s gothic Batman Returns is tragic, grotesque, and absolutely unforgettable. This cosplayer did a fantastic job recreating the now-iconic look; the makeup alone is a genuine work of art, but the costume and even the pose scream Penguin. A gentleman of Oswald’s standing would be proud.

Lady of the woods

Galadriel is one of the most important and famous characters in the Lord of the Rings franchise. Made famous by Oscar winner Cate Blanchett, Galadriel will return in Prime Video’s The Rings of Power, played by Morfydd Clark. Cosplayer Lauren Stewart expertly recreated Galadriel’s look in the upcoming show, donning a fancy armor that looks ready for battle.

Little Shop of Horrors is one of the most beloved Broadway musicals out there. The title character, Seymour, and his carnivorous plant, Audrey II, have become integral parts of pop culture, and they’re a common sight in fan conventions. SDCC 2022 wasn’t the exception, thanks to this cosplayer and his brilliant depiction of Seymour and his dangerous friend.

Harvey Dent, aka Two-Face, is one of Batman’s most complex and famous foes, and Tommy Lee Jones’s performance in Batman Forever redefined the character’s look for an entire generation. This cosplayer replicated the costume perfectly, from the professional-looking makeup to the fresh and updated take on the now-famous black and magenta suit.

Marvel debuted several new projects and the first teaser for Black Panther: Wakanda Forever during SDCC 2022. The highly-anticipated project will feature the return of Okoye and the Dora Milaje, a group of characters who are now fan favorites. This cosplayer paid homage to them, striking the now-iconic pose that’s become one of the MCU’s most meaningful legacies. Wakanda forever, indeed.

Everything coming to Paramount Plus in October 2022:…