The Queen’s Health: Concern across the Commonwealth as Royal Family rushes to Balmoral 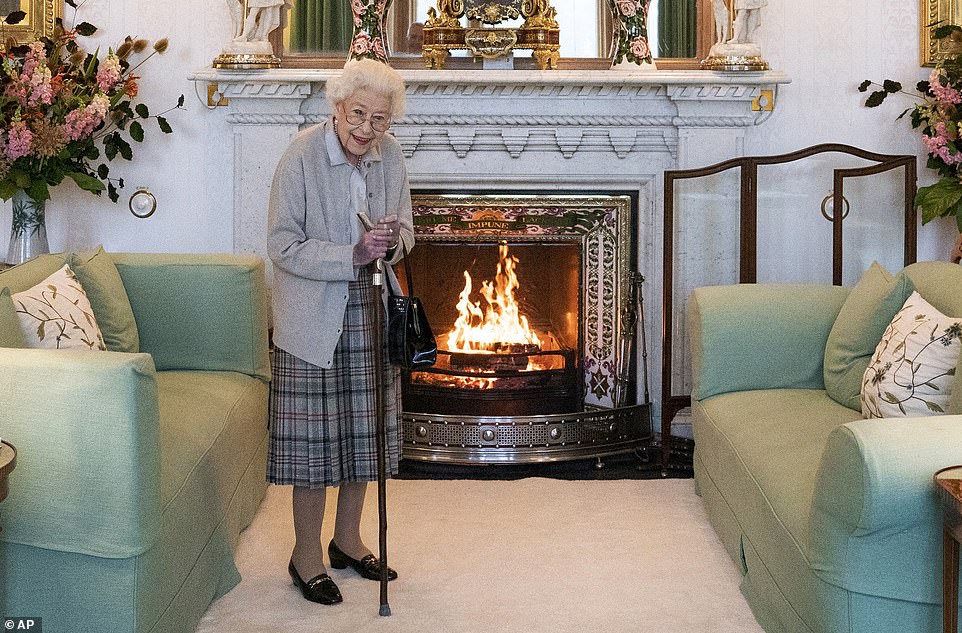 News about the growing concerns over the health of Britain’s Queen Elizabeth II dominated the homepages of newspapers around the world on Thursday.

Buckingham Palace said her doctors were ‘concerned’ for her health and recommended that she remain under medical supervision at Balmoral castle. The 96-year-old head of state – Britain’s longest-serving monarch – has been dogged by health problems since last year that have left her struggling to walk and stand.

The Queen – an instantly recognisable figure to billions of people across the globe – is in her Platinum Jubilee year, marking 70 years since she succeeded her father king George VI in 1952.

All her children – heir to the throne Prince Charles, 73, Princess Anne, 72, Prince Andrew, 62, and Prince Edward, 58, were either at or heading to Balmoral, royal officials said. Grandchildren Prince William and Prince Harry – are either already by her side or en route, according to reports.

Newspapers across the Commonwealth – from Canada to Australia – across Europe, and countless others around the world shared the concerning news to their readers on Thursday – while several world leaders said their thoughts were with The Queen and her family at this time. 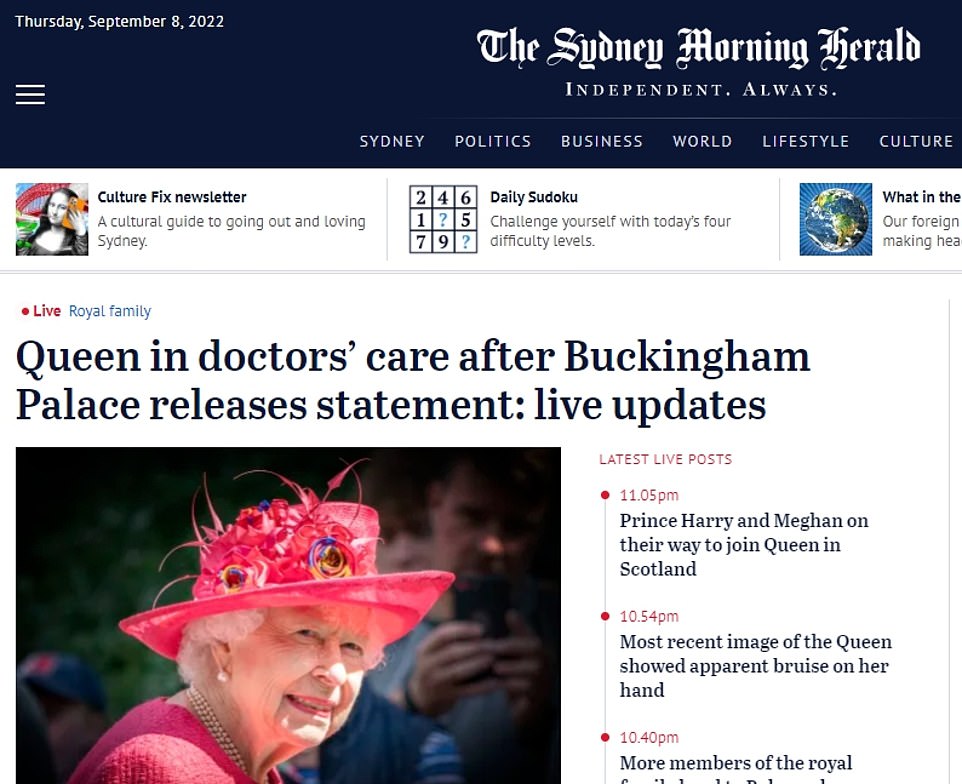 Newspapers across the Commonwealth – from Canada to Australia – and across Europe – including France, Spain, Germany and Italy – as well countless others around the world shared the news to their readers on Thursday. Pictured: Australia’s Sydney Morning Herald announces the news on Thursday that the queen is being cared for by doctors 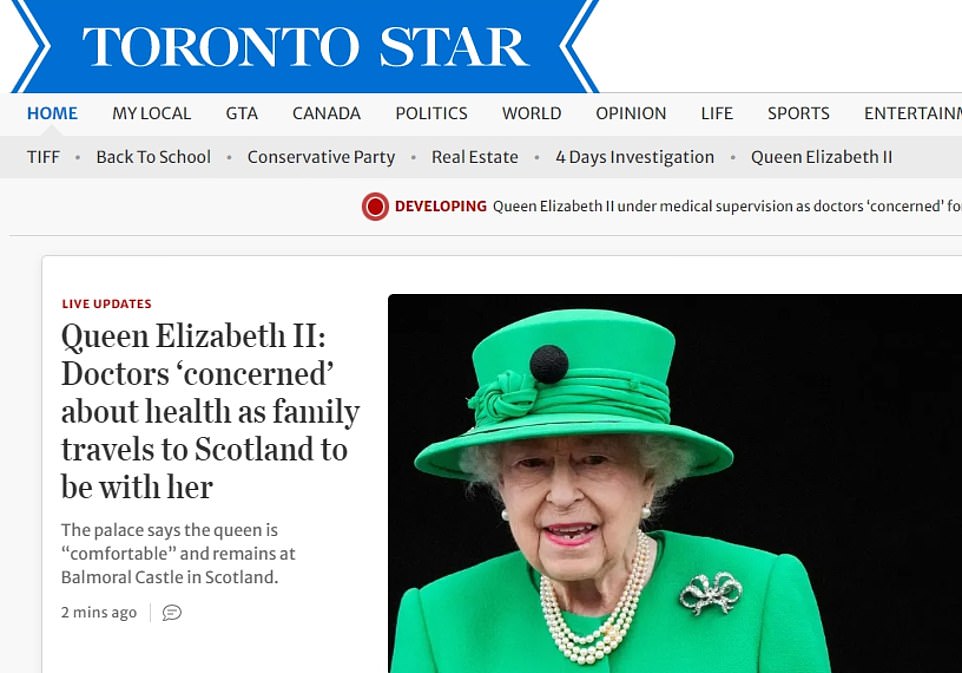 CANADA: The Toronto Star breaks the news to its readers that doctors are ‘concerned’ over the Queen’s health 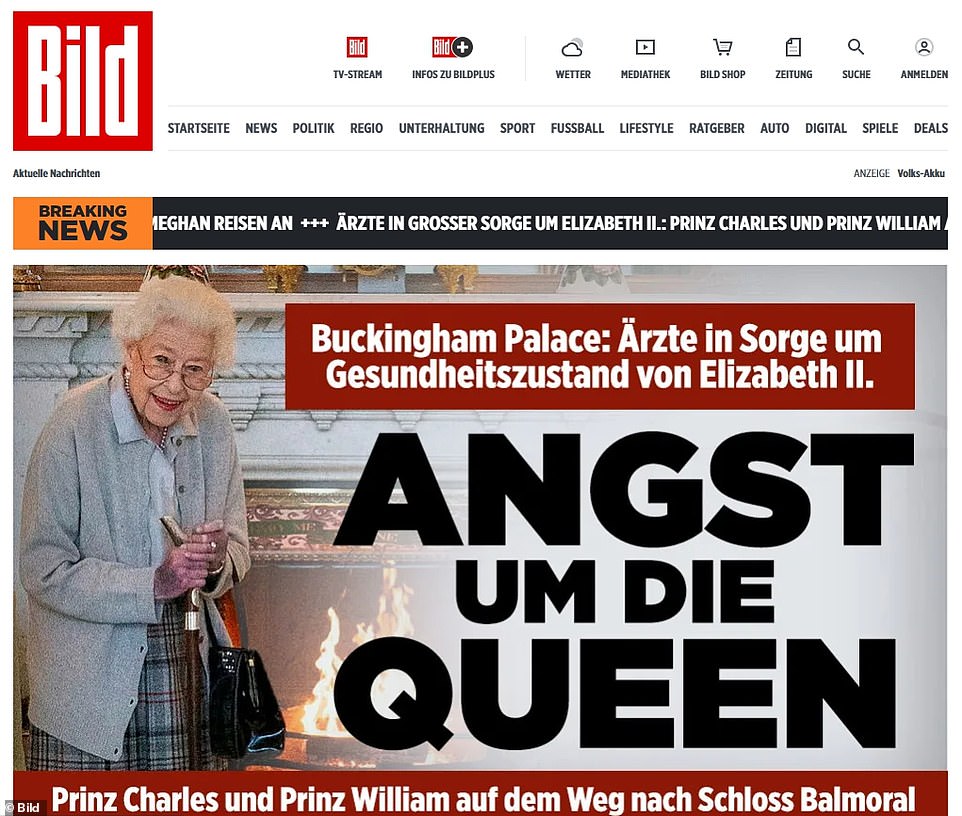 GERMANY: Bild, a Germany tabloid, featured ‘fear for the queen’ on its website on Thursday

ITALY: La Repubblica newspaper in Italy reported that the Queen’s family are converging on Balmoral castle in Scotland 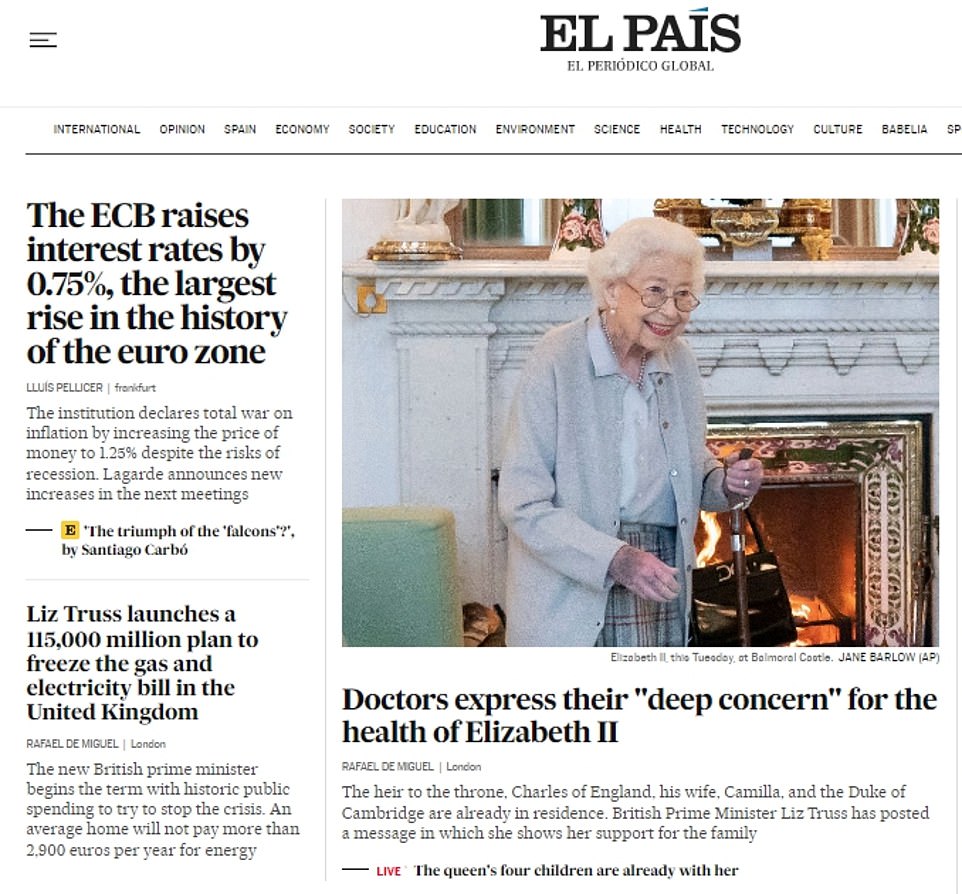 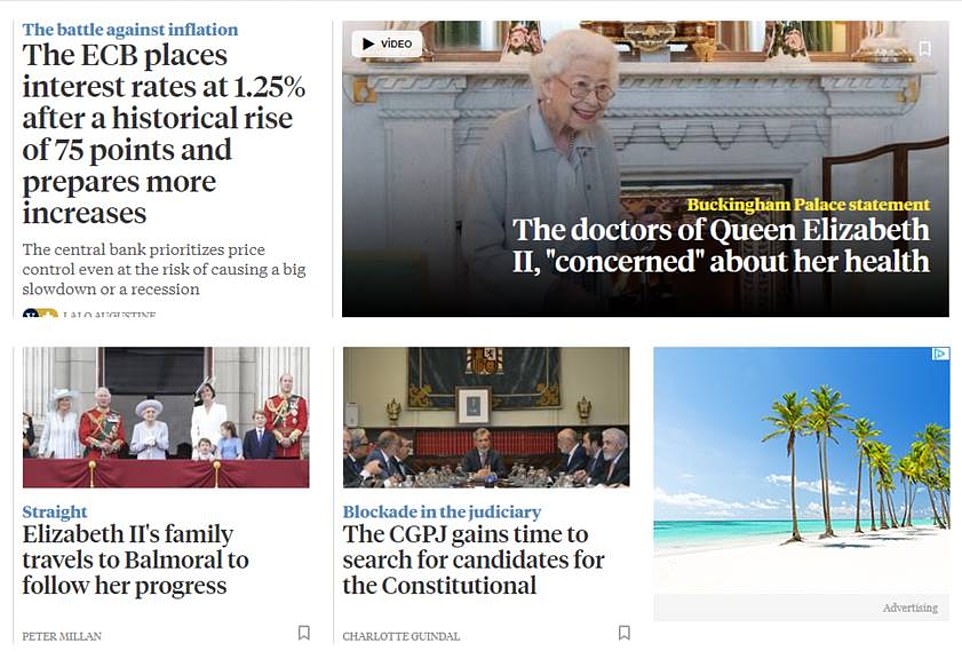 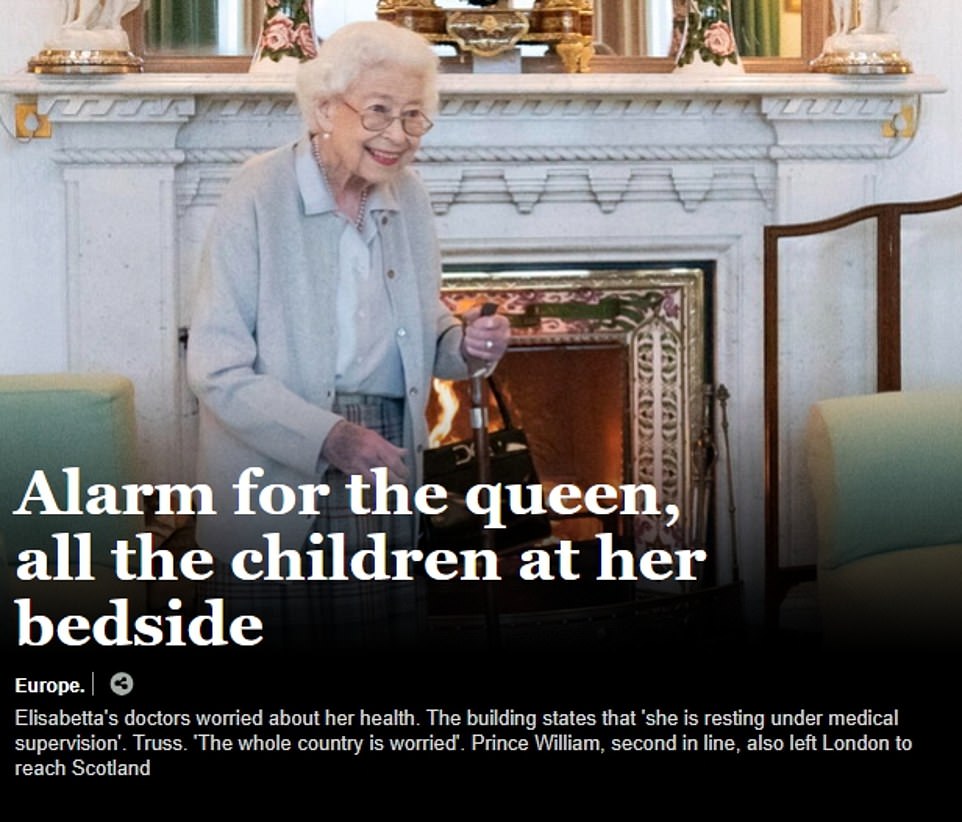 ITALY: Ansa – the Italian news agency – ran the same picture as Bild and several other newspaper. Like Bild’s Ana’s headline broke the news about the fears around The Queen’s health, while reporting that ‘all the children (are) at her bedside.’ 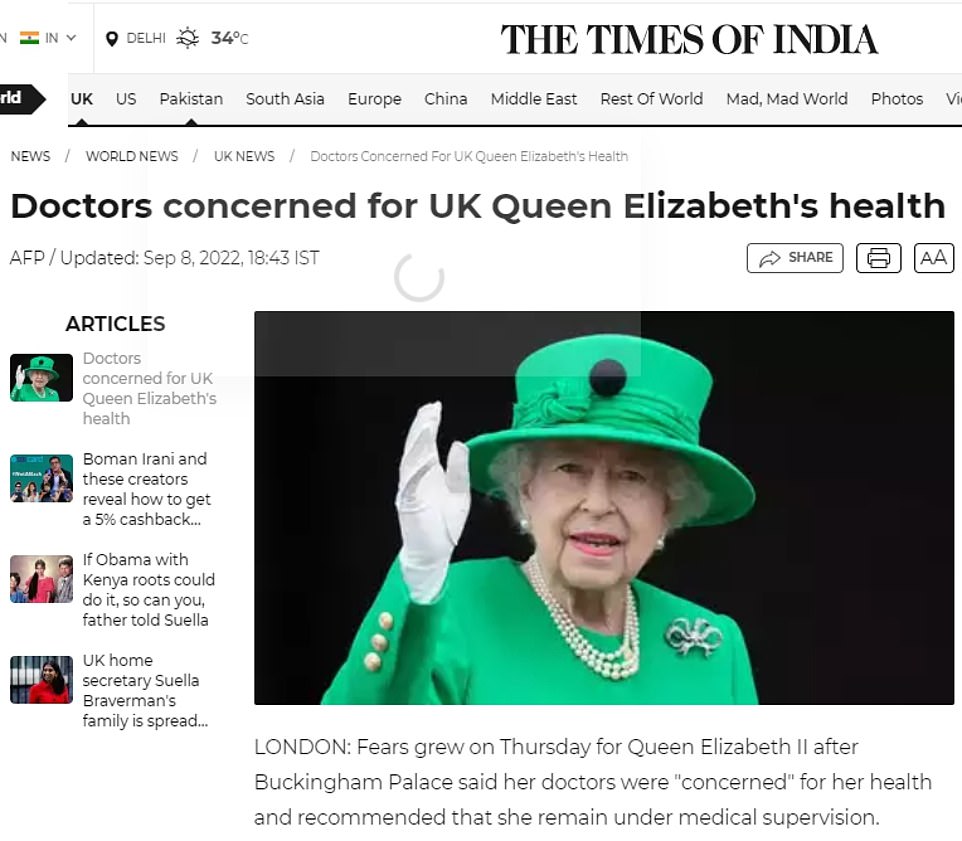 INDIA: The homepage of The Times of India is seen on Thursday 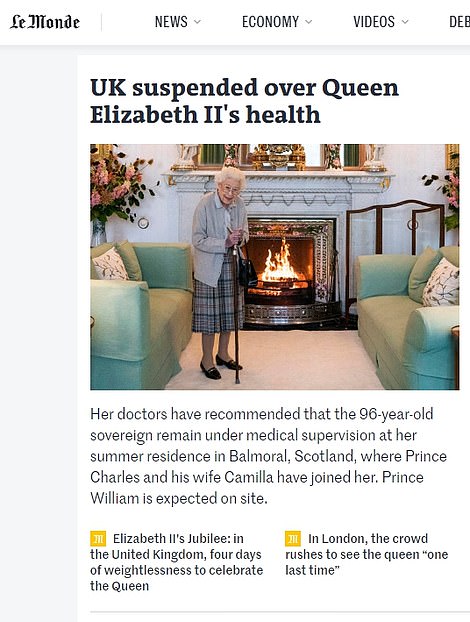 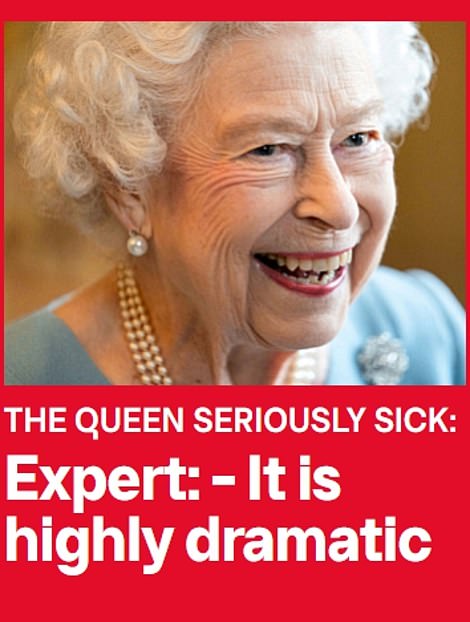 Left: French newspaper Le Monde reports that the UK is ‘suspended’ over the health of The Queen. Right: Norway’s TV2 quotes an expert saying the situation is ‘highly dramatic’

On Wednesday, the queen pulled out of a planned meeting with her senior political advisors, after being told to rest. The previous day she held audiences at her Scottish Highlands retreat, Balmoral, with outgoing prime minister Boris Johnson and appointed his successor, Liz Truss.

Several European newspapers featured a picture of the smiling Queen that was taken as she was waiting to receive Truss on Tuesday. The monarch, pictured holding a walking stick in the drawing room in Scotland’s Balmoral Castle was shown beaming ahead of the occasion.

Bild, a Germany tabloid, featured the words ‘fear for the queen’ over the photograph  its website on Thursday. Similarly, Ansa – the Italian news agency – ran the same picture. Like Bild’s Ana’s headline broke the news about the fears around The Queen’s health, while reporting that ‘all the children (are) at her bedside.’

France’s Liberation newspaper chose a picture of The Queen sitting on the royal throne. It reported that ‘Prince Harry and his wife Meghan’ were heading to to Balmoral Castle on Thursday afternoon. 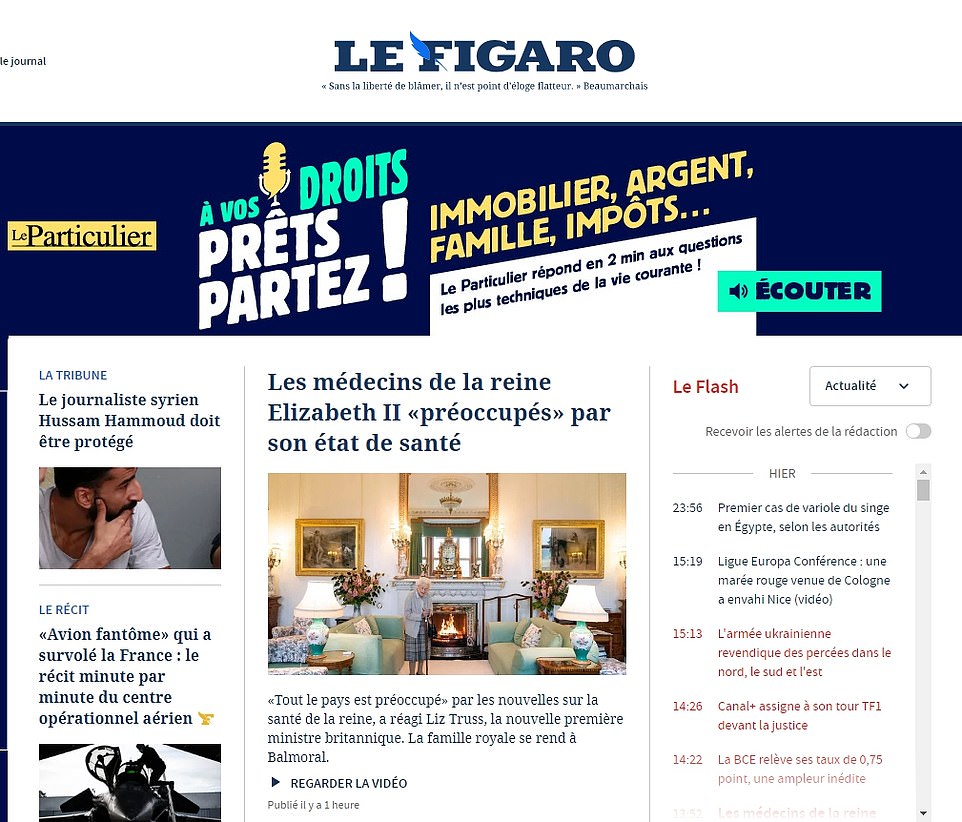 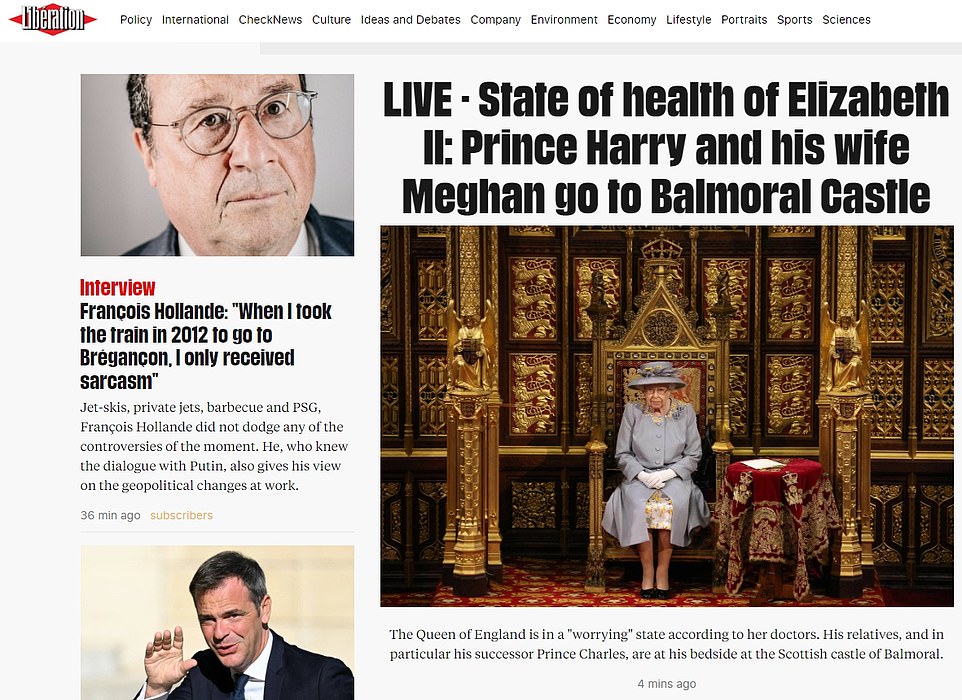 FRANCE: Liberation newspaper features a photograph of The Queen on the throne on its homepage on Thursday 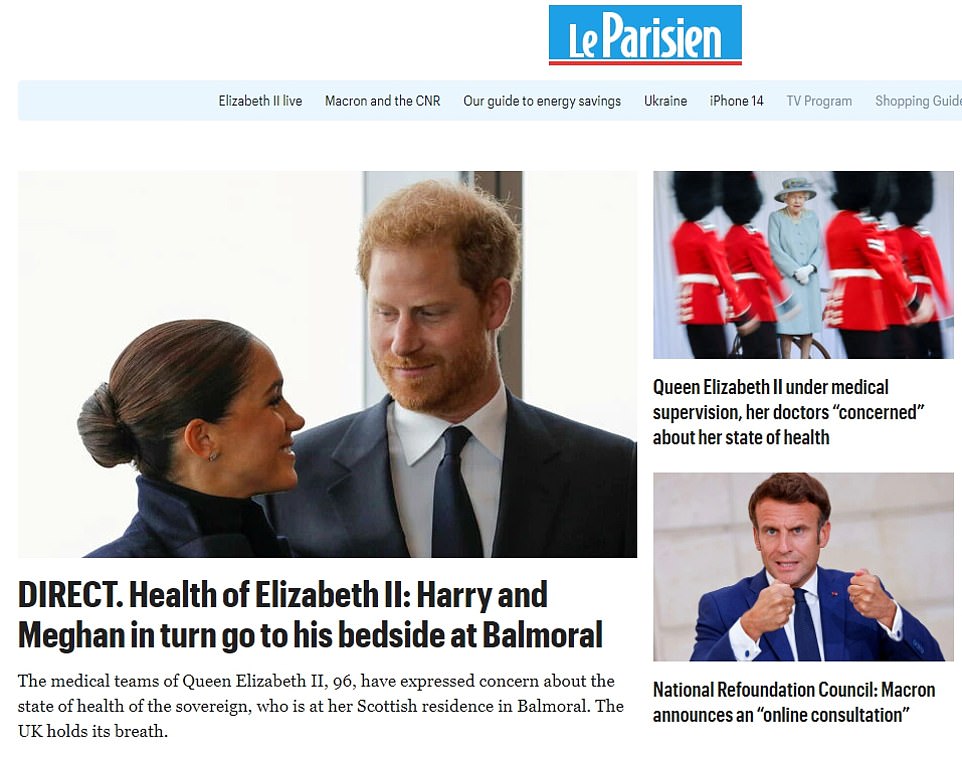 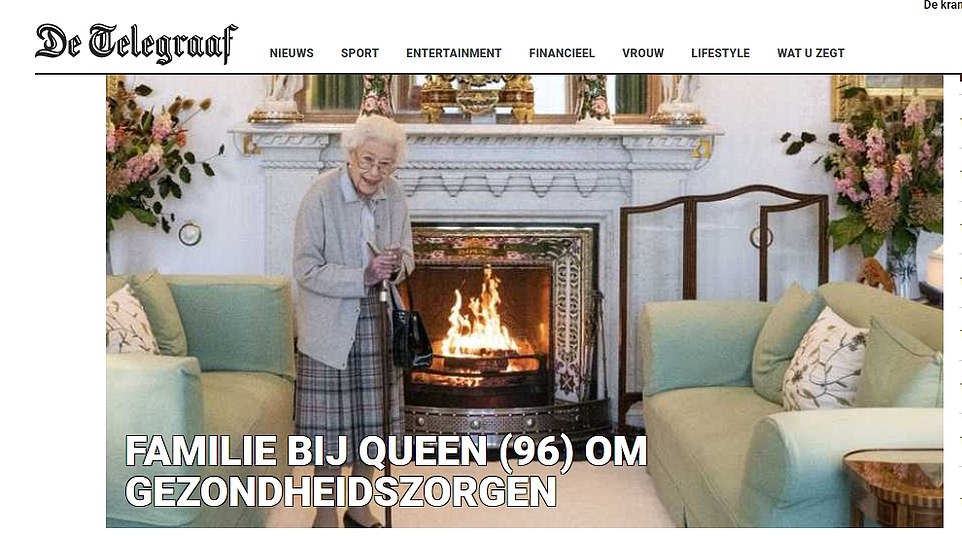 THE NETHERLANDS: Dutch newspaper De Telegraaf reported that The Queen’s family were by her side amid health concerns 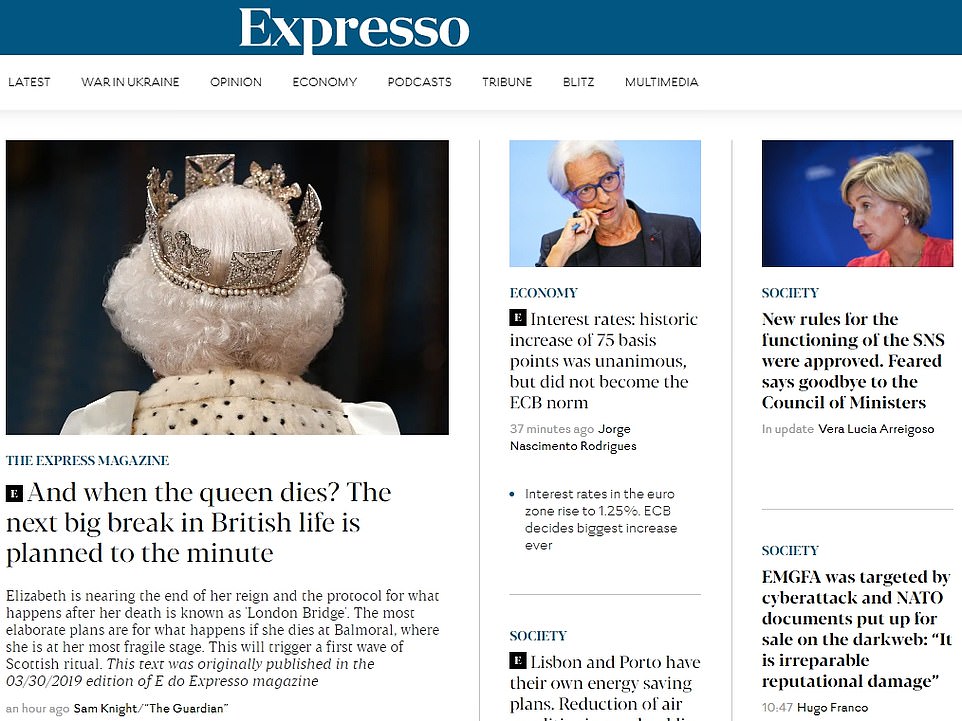 PORTUGAL: Portuguese website ‘Expresso’ features a story about the protocol in place should The Queen’s reign end 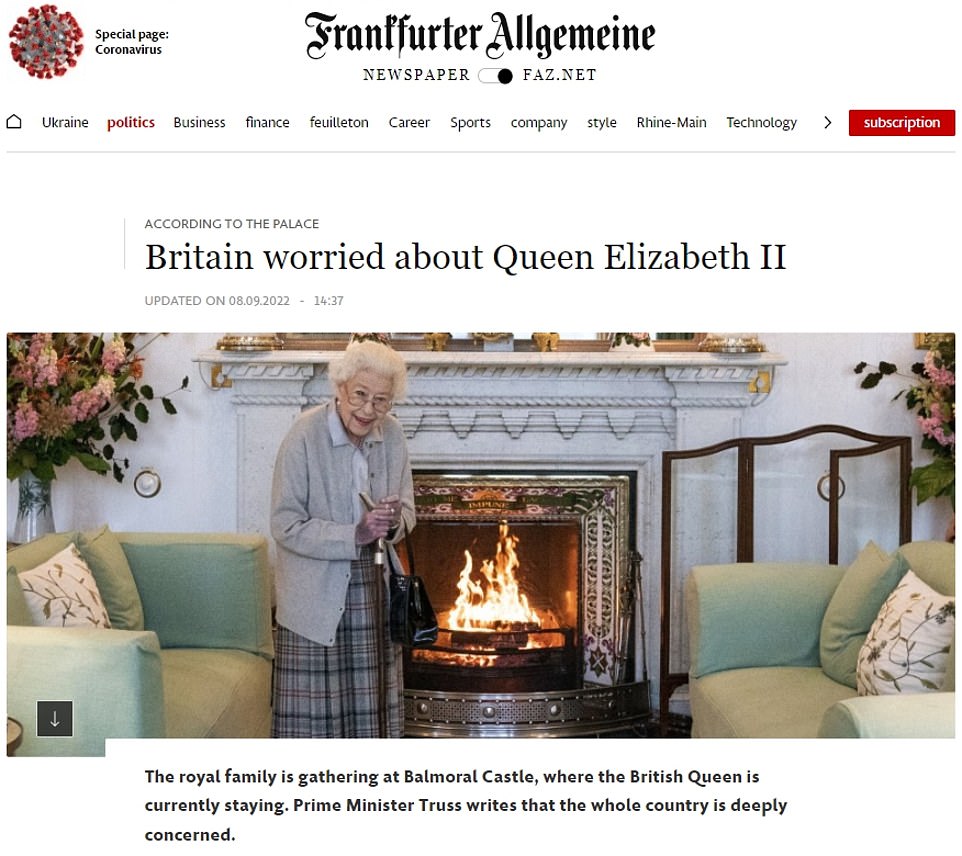 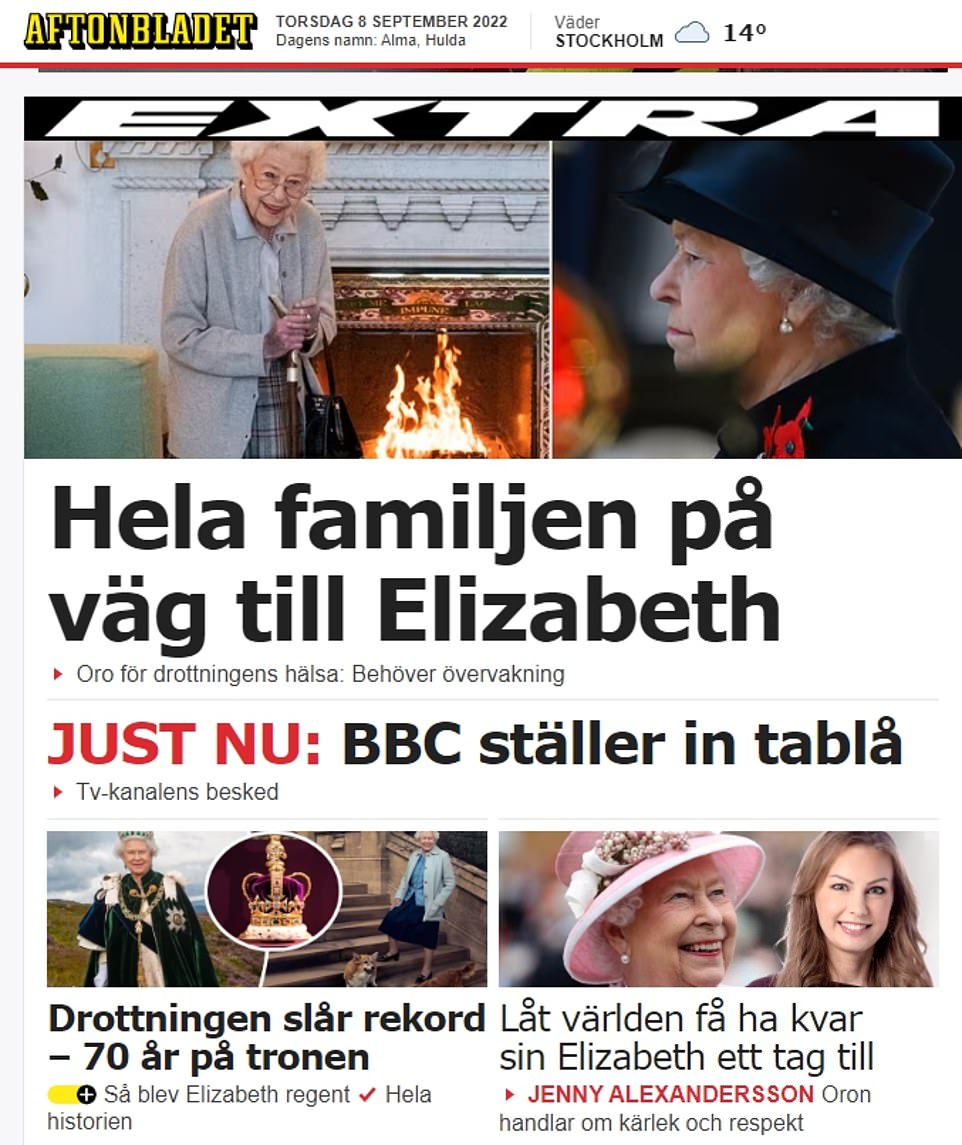 SWEDEN: Swedish news outlet Aftonbladet also said the Queen’s ‘whole family’ were on their way to her bedside. It also reported that the BBC had suspended its regular programming

UNITED STATES: The homepage of the New York Times is seen on Thursday

Pictured: The Los Angeles Times tells its readers that The Queen has been placed ‘under supervision’ by her doctors

Newspapers in the United States joined those across the pond in featuring the news about the Queen prominently on their websites. The New York Times featured a piece detailing the number of Prime Ministers The Queen has seen ‘come and go’ during her long reign, with her latest being Liz Truss.

Broadcaster Fox News said doctors had given ‘troubling news’ about The Queen’s health, while the Washington Post reported that her ‘family heads to her side’.

Their reports came as U.S. president Joe Biden said he and his wife’s ‘thoughts are solidly and squarely’ with the Queen in a statement released by the White House on Thursday.

‘His and the first lady’s thoughts are solidly and squarely with the Queen today, and her family,’ White House national security spokesman John Kirby said.

The Republican leader of the U.S. Senate Mitch McConnell said: ‘The queen is an exemplar of steady leadership and a beloved figure around the world. She has been a historic friend of the United States.

‘The decades of her reign have seen a profound deepening of the special relationship between our two countries that has literally changed the world. The queen, the royal family, and all our friends in the United Kingdom have our thoughts and our prayers,’ he added.

Canadian Prime Minister Justin Trudeau said: ‘My thoughts, and the thoughts of Canadians across the country, are with Her Majesty Queen Elizabeth II at this time. We’re wishing her well, and sending our best to the Royal Family.’

Australia’s governor-general David Hurley said: ‘Following news from Buckingham Palace, and on behalf of all Australians, the Governor-General and Mrs Hurley’s thoughts and prayers are with Her Majesty The Queen and the Royal family at this time.’

On Thursday, Buckingham Palace said in a statement: ‘Following further evaluation this morning, the queen’s doctors are concerned for Her Majesty’s health and have recommended she remain under medical supervision.

‘The queen remains comfortable and at Balmoral,’ the palace added.

In February she was laid low by a bout of Covid, which she admitted afterwards had left her ‘exhausted’.

Officially, the palace has said only that the queen has been suffering from ‘episodic mobility problems’ but given no further details. 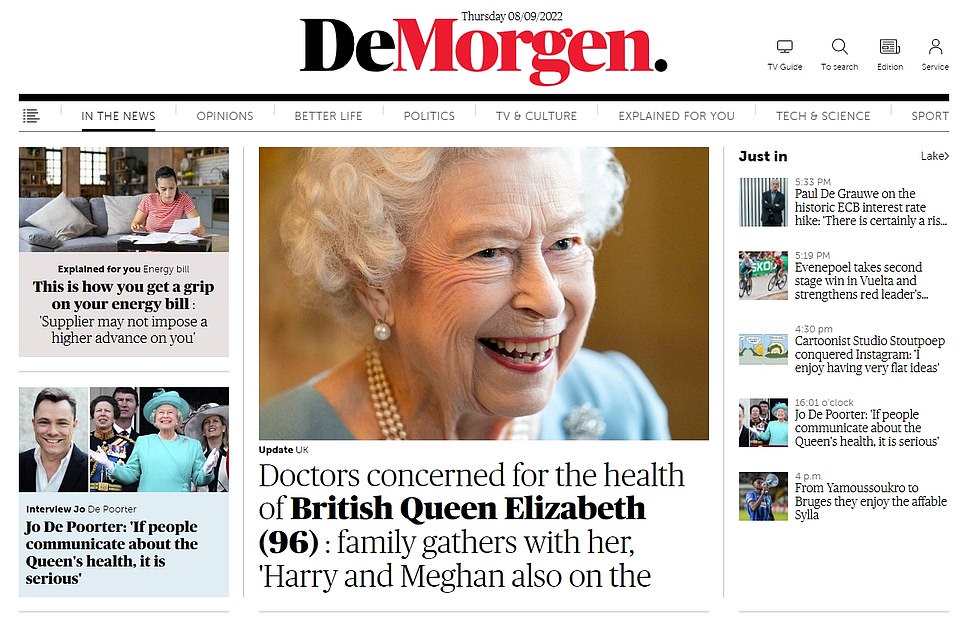 BELGIUM: The homepage of De Morgen, a Flemish language newspaper from Belgium, is seen on Thursday afternoon 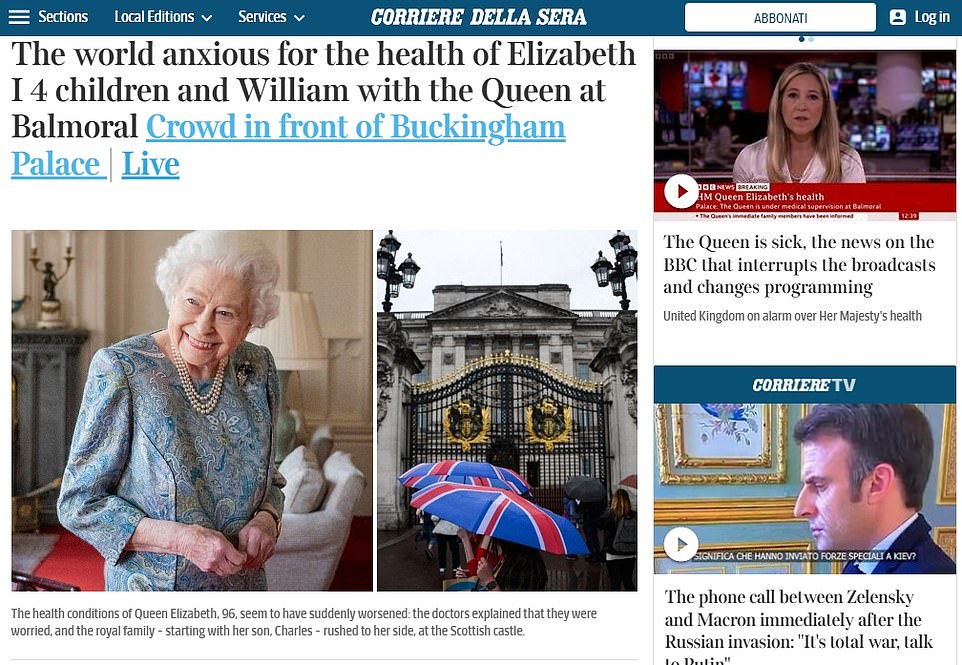 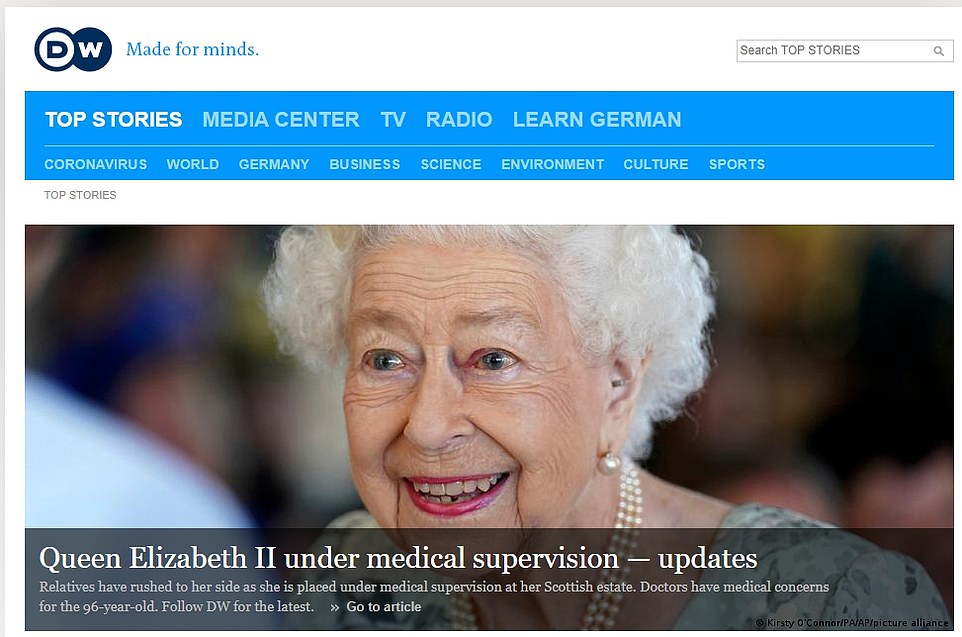 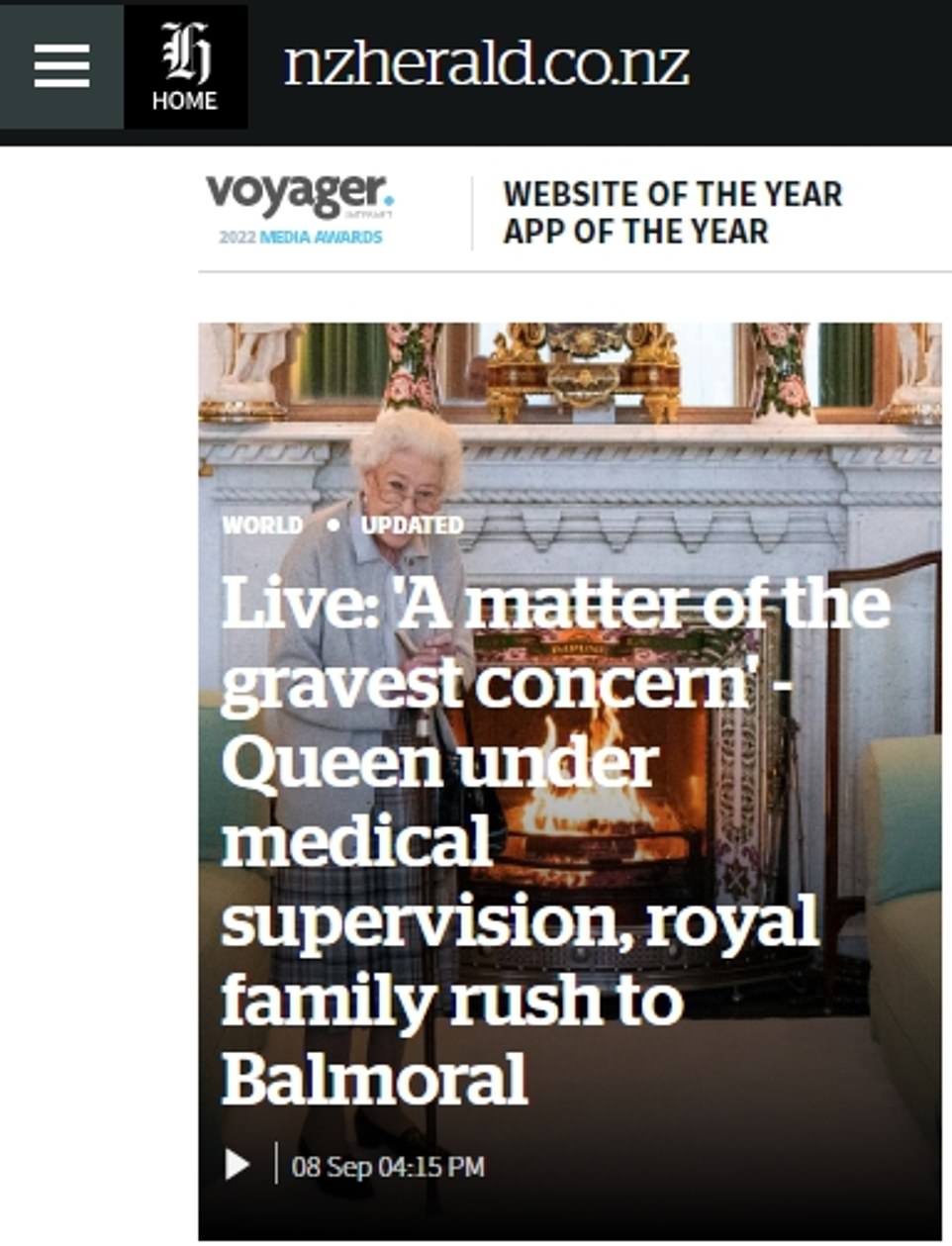 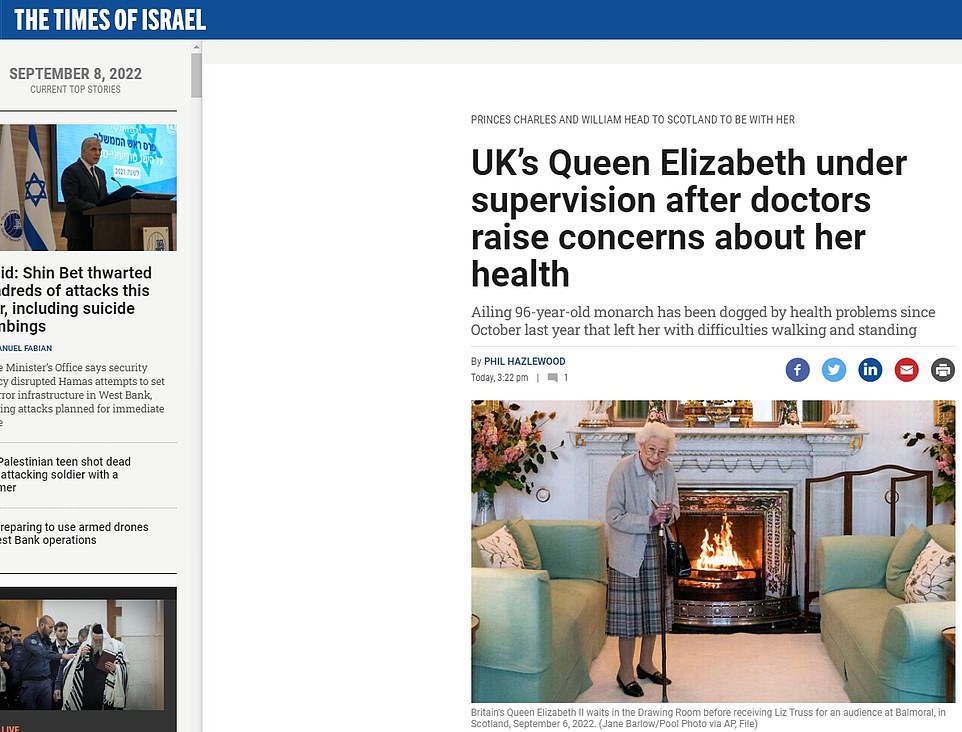 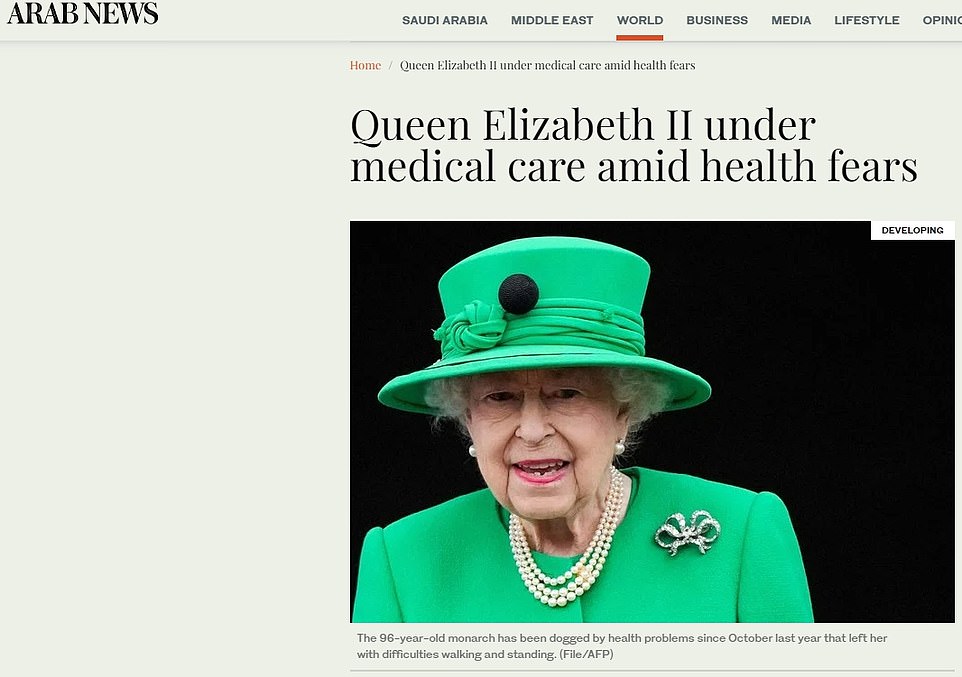 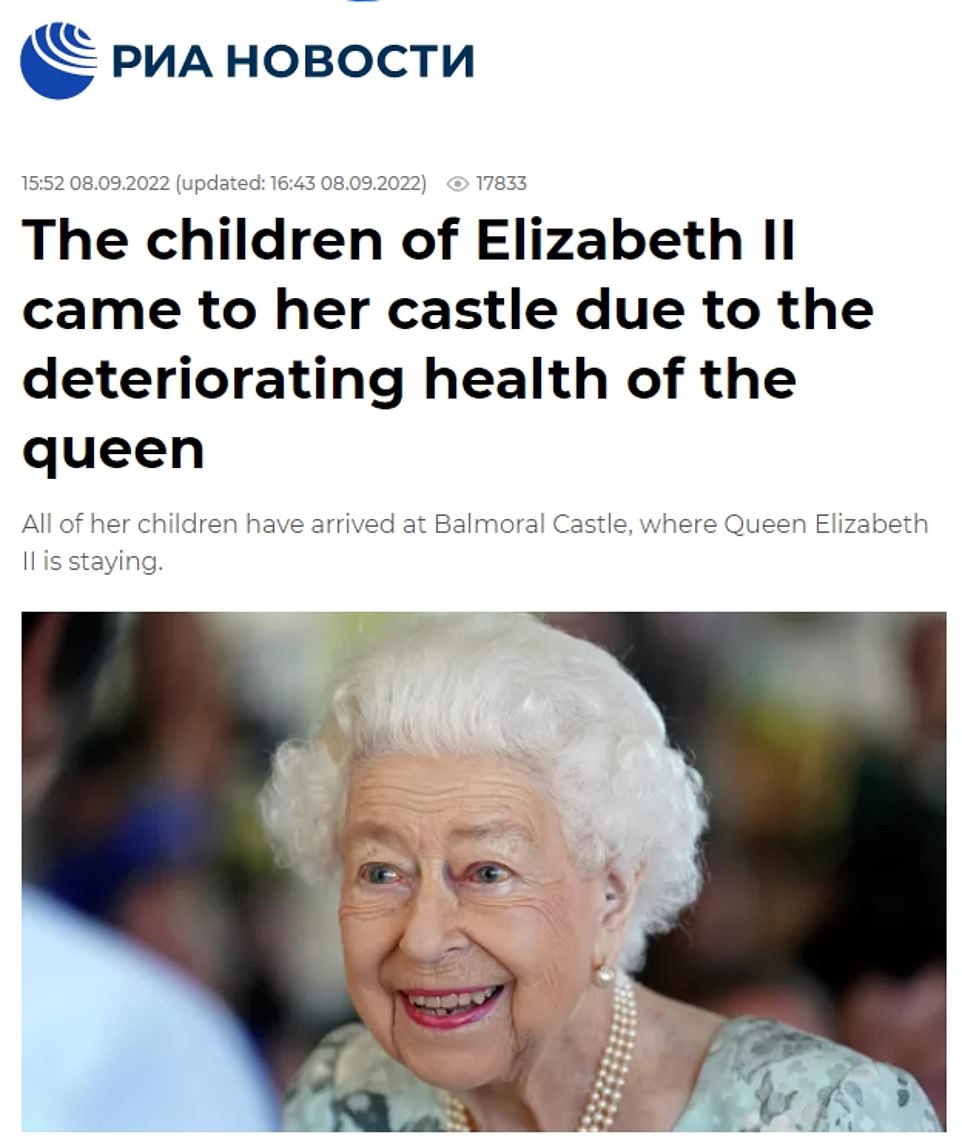 She spent an unscheduled night in hospital in central London in October 2021 and was advised to slow down.

She has pulled out of ceremonial engagements, delegating more to Charles, including the State Opening of Parliament and the Trooping the Colour military parade to mark her official birthday.

Moments before Thursday’s announcement, notes were passed to Truss and senior members of her team in parliament, prompting them to leave the chamber.

Truss tweeted almost immediately afterwards: ‘The whole country will be deeply concerned by the news from Buckingham Palace this lunchtime,’ she added. ‘My thoughts – and the thoughts of people across our United Kingdom – are with Her Majesty The Queen and her family at this time.’