The Revolution’s 10 game unbeaten streak was snapped by NYCFC. 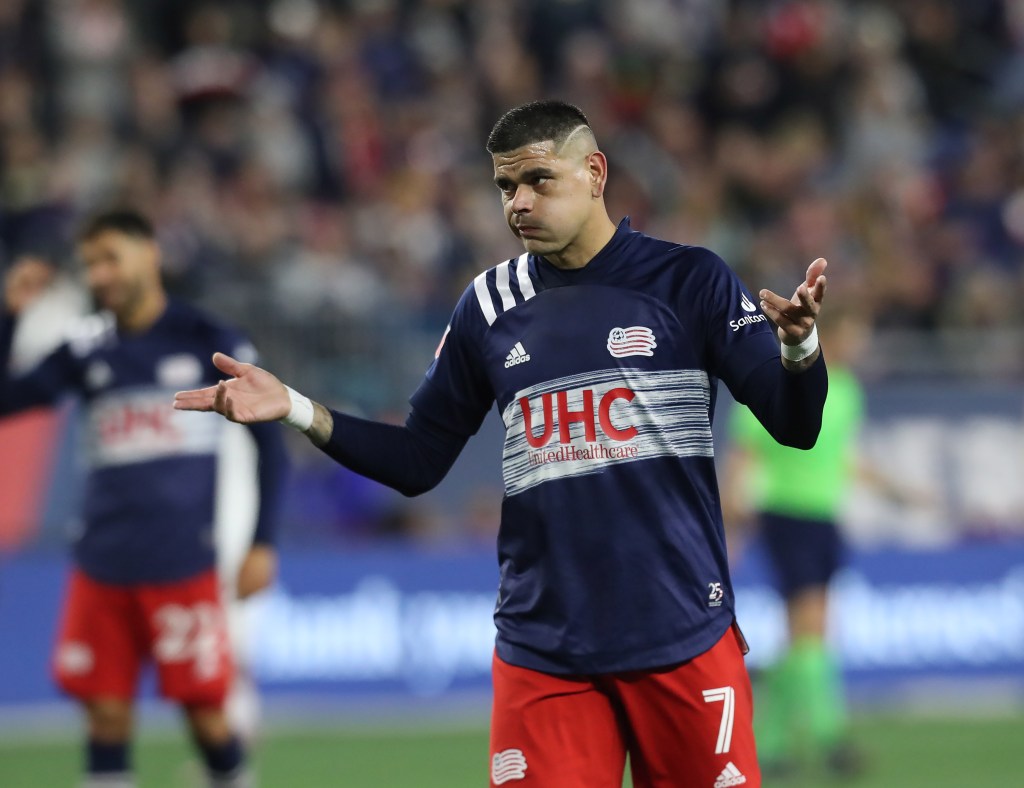 The Revolution’s 10-game unbeaten streak crashed and burned with a self-destructive 4-2 loss to New York City FC in a matinee match on Saturday at Yankee Stadium.

The result was particularly gruesome for veteran center back Andrew Farrell, who committed two first-half fouls in the penalty area that resulted in a pair of goals and a red card ejection. The Revolution fell to 6-6-7 and resume play on Saturday night in Philadelphia.

“It certainly wasn’t good and we will leave it at that, what more can I say,” said Revolution head coach Bruce Arena. “There was a chance that we could have a good game today despite the fact that we were playing on a bad baseball field that is supposed to be a soccer field.

“We are scheduling games at one in the afternoon in July but we had two good teams. We had a chance of having a really good game.”

NYCFC went up 1-0 in the 10th minute on a brutal combination of missteps by Farrell in the Revs’ end. Farrell’s clear was intercepted by Talles Magno, who streaked toward the Revolution goal. Farrell compounded the deteriorating situation when he undercut Magno in the penalty area. Referee Tim Ford awarded Magno a penalty kick and he beat Petrovic with a low shot to the far post for his fifth of the season.

The Revolution tied the game on an alert play by Sebastian Lletget on the end line in the NYCFC end. Lletget won a race to the ball and fed it back to Gustavo Bou, who beat keeper Sean Johnson with a swift kick inside the far post.

Petrovic preserved the 1-1 tie with the biggest save of his young MLS career. Maximiliano Moralez was knocked down in the penalty area by Kessler on a disputed play and Ford handed NYCFC its second penalty kick. Sniper Valentin Castellanos fired the ball toward the near post, but it was grabbed by Petrovic.

“We were super happy with that save and we think it was justified because he is a big guy in the net,” said defender DeJuan Jones. “He is intimidating for other team’s strikers on penalty kicks.”

NYCFC went up 2-1 in on its third penalty kick of the first half. Farrell poleaxed Castellanos from behind just as he crashed the box. Farrell was issued a red card and Castellanos buried his second freebie in the 44th minute.

NYCFC interim coach Nick Cushing’s second-half strategy involved double teaming Carles Gil while pressing the attack on the undermanned Revs. Gabriel Pereira made it 3-1 in the 49th minute when he kicked home a rebound.

The Revs made it 3-2 when DeJuan Jones set up Bou for his brace in the 77th minute. Bou has six goals in the last seven games. Castellanos got his brace in the 82nd minute and has 12 on the season.

“Gustavo had a real good game and I thought our team played really well,” said Arena. “The heart they showed in the second half was remarkable and I just give our guys a lot of credit.”

Jacob’s Well shuts down, other swimming holes impacted by drought