The skeletons at the bottom of Devils Hole 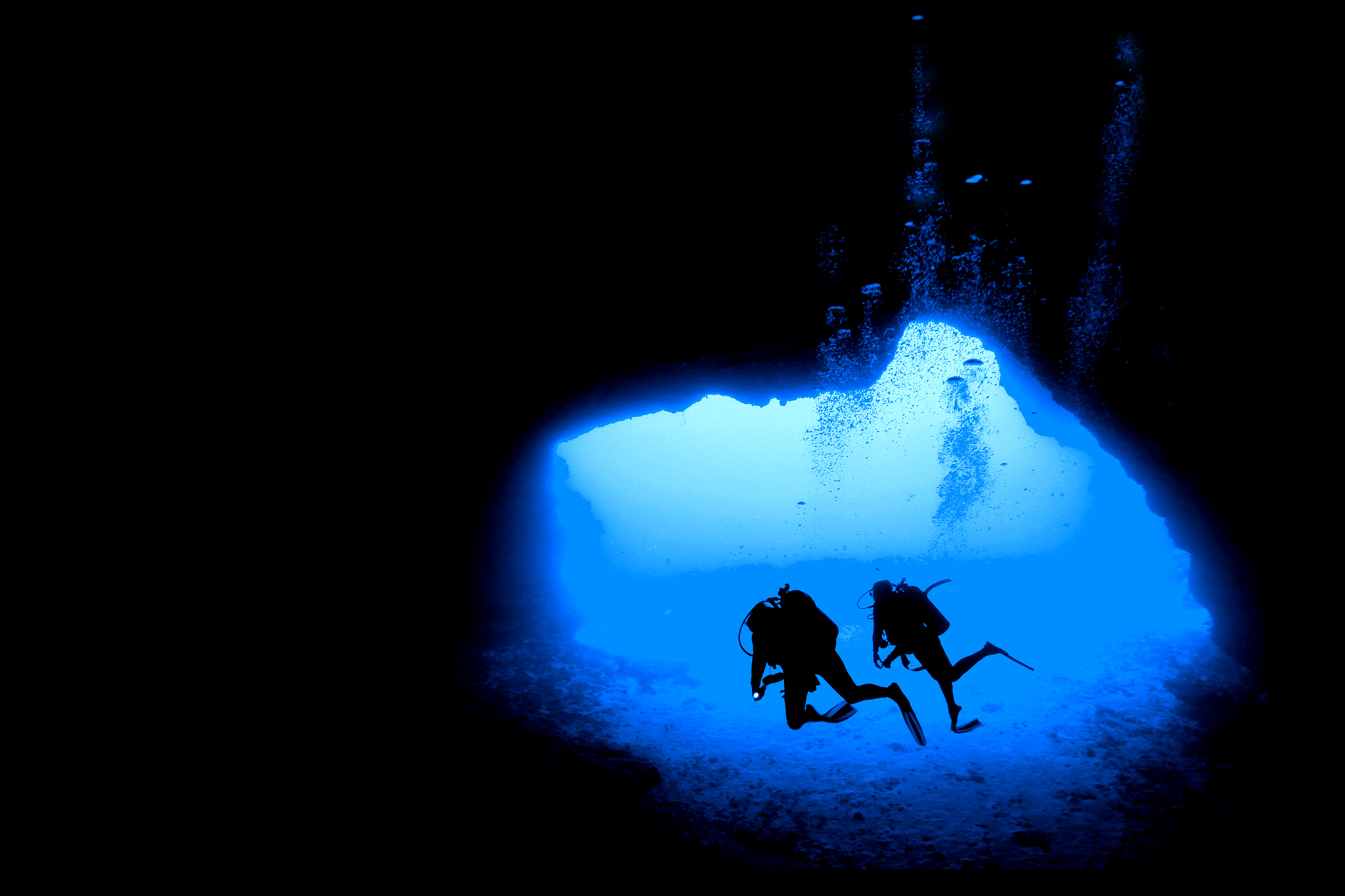 The tragedy that took two young lives at Devils Hole in the Mojave Desert on a summer night in 1965 involves several colliding factors, some unearthly. A hidden lake below the desert; an ancient seismic event; a group of kids from Las Vegas making bad choices; and one of the rarest animals on Earth — the Devils Hole pupfish.

For centuries, the mysterious opening in the desert just over the Nevada border confounded those who stumbled across it. On its surface, a gap in the rock the size of a living room drops down 30 feet to a limestone shelf and hot water pool. Below, a series of tunnels lead to numerous caverns and the “infinity cave,” a giant underwater lake that has never been fully mapped.

Several adventurers have tried to find its deepest contours.

One diver, Jim Houtz, dove into the hole dozens of times in the early ’60s. It was his dispatches describing the strangeness below that inspired the group of four young men who set off on June 20, 1965, to explore the natural phenomenon. Ironically, it was Houtz who would later lead a record-setting dive in an attempt to find them.

Here’s how Houtz himself described the hole’s underground topography:

“It’s beautiful in there. It goes straight down 160 feet, like a pipe, then opens into a room,” the explorer told reporters in 1965. “I dived to 315 feet, maybe it’s a record, I don’t know, but at the end of the tube it opens again into something else. We don’t know what the next room is, or if it’s a room at all. It’s like infinity.”

The diver called the rocky walls inside the cavern the most beautiful stone he had ever seen. “Greens. Blues, so blue, they are nearly white. Quartz. Bronze colors, every color in the rainbow,” he said. “There’s nothing to be afraid of, except panic and stupidity.”

Four high school friends — David Rose, 20, a Las Vegas casino parking attendant; Paul Giancontieri, 19, a cafeteria worker at the nearby Nevada nuclear test site; and brothers Bill, 19, and Jack, 20, Alter — headed to the spot, 90 miles northwest of Vegas, armed with some amateur diving gear and a whole lot of courage that Sunday night.

A few hundred feet from a dusty road now known as Devils Hole Road in Nye County, the small bluff that hides the pool is accessible only by foot.

The temperature of the water at the geothermal pool remains at about 92 degrees year round, not much cooler than the human body. This unusual warmth combined with a small rock shelf that juts out just below the water surface has given rise to a unique and exceedingly rare animal that calls the cave home. It’s unclear if the boys knew about the pupfish that day, but they almost certainly endangered the entire species’ fragile existence as they lowered themselves into the water.

The Devils Hole pupfish, named for its habit of frolicking like puppies, is thought to be the rarest fish on Earth. The 1-inch metallic blue fish with iridescent eyes lives only in the upper 80 feet of the cavern, and spawns on the rock ledge that forms a sun-dappled shallow pool at the cavern’s entrance. They are found nowhere else, and no one is really sure how they got there. Their tiny habitat is the smallest range of any vertebrate species on the planet. After the discovery of the fish, the cave and surrounding area were added to the Death Valley National Monument by President Harry Truman in 1952.

Efforts to prevent the species from being wiped out have been successful in recent years — in spring of 2022 scientists counted 175 fish, the highest count in 22 years. Back in the 1960s, however, not everyone was a fan of the animal and efforts to protect it. Local ranchers in nearby Ash Meadows were building wells and siphoning the desert’s groundwater, lowering the water level in the hole to below the shelf where the pupfish spawn.

After Nye County ranchers were banned from drawing groundwater from Devils Hole, a political feud erupted in the desert. Two bumper stickers were a common sight at the time — “Save the pupfish” and “Kill the pupfish.” This culminated in a Supreme Court decision in 1976 (Cappaert v. United States) forever protecting the water level in the pool and the pupfish who had fast become an icon of the burgeoning ecological conservation movement. Protesting the ruling, the farmers’ attorney told reporters, “There are two endangered species here: the pupfish and the American rancher.”

Even in 1965, only those with diving permits were allowed to enter the hole, but the boys ignored the warning signs and lowered themselves down to the rock shelf. Three of them — Giancontieri, Rose and Bill Alter — dove into the water without wetsuits, but with rudimentary air tanks, or “aqua lungs,” on their backs. Bill’s brother Jack stayed on the shelf as a lookout.

Shortly into the dive, at an unknown depth, Bill noticed his oxygen supply was already running low. He recalled the following day that on realizing this, all three divers headed back up.

Alter and Rose then frantically dove again to find their friend. When Bill Alter came up for the second time, he realized he was now the only diver to surface. Giancontieri and Rose were gone.

“He got ahead of me and I lost him,” Bill Alter told reporters. “I went to a depth of 175 feet and couldn’t find him.”

The surviving brothers drove through the night back to Vegas to get help. Rangers and a sheriff’s search and rescue posse got to the hole in the early hours, telling reporters there was a slim chance the missing boys “may be sustained by air pockets in the hole.” A search team of five divers, led by Houtz, worked in 105 degree heat through the day to no avail.

In a further tragic twist to the scene, the two missing young men had recently become brothers-in-law — Giancontieri’s 20-year-old sister Paula had married Rose two months earlier. The newspapers reported that she wept at the cave entrance as the search and rescue team worked, but failed to find her brother or husband. Photos showed Rose, her mom and Bill Alter hugging as they were told that the search was over.

Due to the tragedy in the strange corner of Nevada, Devils Hole briefly fell into the national spotlight, but no one could really describe what it actually was. Some called it a “sump hole into an underground river;” other reports called it an “extinct geyser,” or a “skylight to the water table.”

An excellent report on Devils Hole by the The Mojave Project writes that the first human inhabitants of Death Valley — the Timbisha people — told ancient myths warning children of “water babies” in the hole that would swallow children if they bathed for too long in the pond. The project also learned, in consultation with tribal elders, that some Native people believed that shaman with healing powers traveled the desert via the underground waterways.

Later, white settlers who arrived in the region looking for gold in 1849 reveled in the tiny desert oasis.

“At the entrance to the valley to the right is a hole in the rocks which contains magnificent warm water in which … I enjoyed an extremely refreshing bath,” a prospector named Louis Nusbaumer once wrote. “The saline cavity itself presents a magical appearance.” At the time, the pond was referred to as Miner’s Bathtub, and was renamed Devils Hole by Houtz himself in 1964. Around that time Houtz suggested that the source of water there may be “limitless,” and in an astute prediction of the coming times of drought, that it could one day save Southern California.

A few years after the 1965 deaths, Charles Manson convinced his followers to set in motion a bogus race war through the Tate-LaBianca murders in LA. On the run, he reportedly scoped out the cave as a shelter for his delusional and murderous “Family.” Manson would be caught a few months later hiding under a sink at his hideout at nearby Barker Ranch in October 1969.

Over the years, security has increased around the hole to both protect people from the hole and the pupfish from people. This included the installation of a tall fence and cameras. But it hasn’t always stopped sometimes drunk trespassers from invading the pupfish’s home.

In 2016, three men camped out at the nearby town of Crystal, drank rum and chased rabbits around the desert with shotguns. At the time, a 10-foot fence protected Devils Hole. In an intoxicated, mischief-filled adventure (one the men barely remembered when arrested days later), they shot out the surveillance camera, scaled the fence, stripped naked and punched each other in the balls.

Footage from the scene reportedly showed one man vomiting on a boulder as another stripped down and lowered himself into the pool. Trent Sargent, the Indian Springs man whose underwear was found in the pool the following morning alongside a dead pupfish, served a year in prison for charges that included a violation of the Endangered Species Act.

To this day, no one knows how deep the cave goes. The farthest depths were seen in 1991 by USGS explorers who descended 436 feet into the lower cavern. They reported being able to see to a depth of 500 feet, though they were not able to actually see the bottom of the cave.

One curious reason that the underground lake is thought to descend much farther into the Earth than other caves is the strange effect distant seismic activity has on the surface water there. In March 2012, cameras set up at the hole captured a tiny tsunami in the pond, in which the water sucked into the cave before surging up 4 feet.

Scientists say an earthquake of a 7.4 magnitude in Mexico caused the phenomenon. This magnification of distant rumblings implies the water may somehow connect with the deep movement of tectonic plates. It’s believed that the hole was formed millennia ago when an ancient fissure collapsed in on itself.

There’s something magical in knowing corners of the planet remain unmapped. Parts of the ocean floor and deepest rainforests still hold such reverie, but to know those unexplored depths exist below a small hole in the desert a few miles outside Las Vegas is even more beguiling.

When the bottom of Devils Hole is one day found, the skeletons of two brothers-in-law may finally be recovered, fathoms below the frolicking pupfish.

GPs are resisting NHS request to update their patient lists