These plants soak up nutrients from manure. They may make feedlot water clean enough to drink 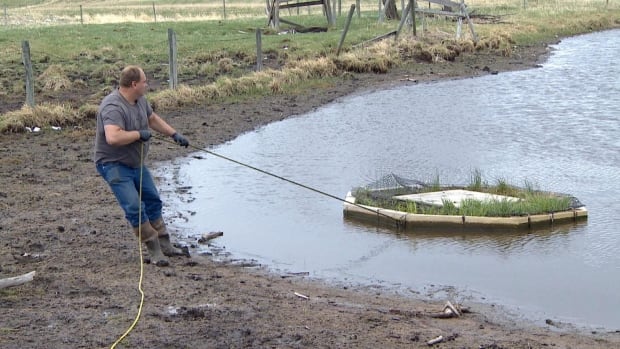 On a feedlot in central Alberta, nearly 100 kilometres northeast of Calgary, researchers gathered to watch as floating islands were launched onto a pond created by runoff water.

But the islands are the result of years of research and testing that could help the feedlot business recycle wastewater to the point where it could be used on crops or for cattle.

And it could go beyond just that.

“This, I think, is really an important movement for us in the future,” said Steven Tannas, owner of Alberta-based Tannas Conservation Studies and a partner with the project.

“We’re creating natural systems instead of [using] a big facility where you have a big building treating water … we can create natural systems that look good, and are good for the environment, while also treating.”

The islands are part of a project born from an idea Ruth Elvestad had six years ago. The water and environment technician was thinking about water conservation when her mind wandered into thoughts of space exploration.

“An example that popped into my head as to recycling water was astronauts, and their water supply when they go to the moon,” said the Olds College research technician.

“If that water can be recycled, why could we not do it with farm feedlot water?”

That led to the floating islands project. The goal? To determine if native wetland plants can soak up the nutrients in runoff water that are mudded with manure.

The floating island’s frames are coated in polyvinyl chloride. They’re made of metal and have a foam core which allows them to float. The base is covered in a geotextile fabric which prevents soil loss, and the plant’s roots can also grow through it.

They’re designed by Tannas, the owner of Tannas Conservation Studies.

His company specializes in plant identification and management of native ecosystems and it is part of the Olds College study.

“We’ve been testing [the plants] to find out what contaminants they pull out of the water,” Tannas said. “We’re focused on nitrogen, phosphorus, and potassium as our main ones.”

They also look for some sulphites and heavy metals, he added.

Researchers will be studying the results to see if the floating islands and the plants they house can improve water quality to the point where it can be used for irrigation or livestock drinking water standards.

Last month, the third phase of the project was in full swing when scientists, researchers, and agriculture companies came together on a feedlot in Linden, Alta., to watch as the islands and plants were deployed onto a pond.

“It’s pretty cool, it’s innovative, and sustainability is a big thing with farming nowadays, so anything green and floating is going to look good,” said Kevin Klassen of Klassen Agriventures.

A pond on his feedlot was used for the test launch. He’s hopeful that with the plants, there will be significantly less runoff water maintenance involved.

The project is being funded by the United Farmers of Alberta, the Alberta Real Estate Foundation and Results Driven Agriculture Research, a collaborative research program that works at arms-length from the Alberta provincial government.

If it’s successful, the project will provide feedlot operators with a tool for cleaning water but also for retrieving potentially valuable nutrients.

But Elvested thinks that the potential goes far beyond agriculture.

“I’m interested, and will always be interested in, wanting to see the results, and see how it’s going to help not only feedlot owners, but farmers, or anybody else that needs to recycle water,” she said.

Where abortion will likely be on the ballot in 2024