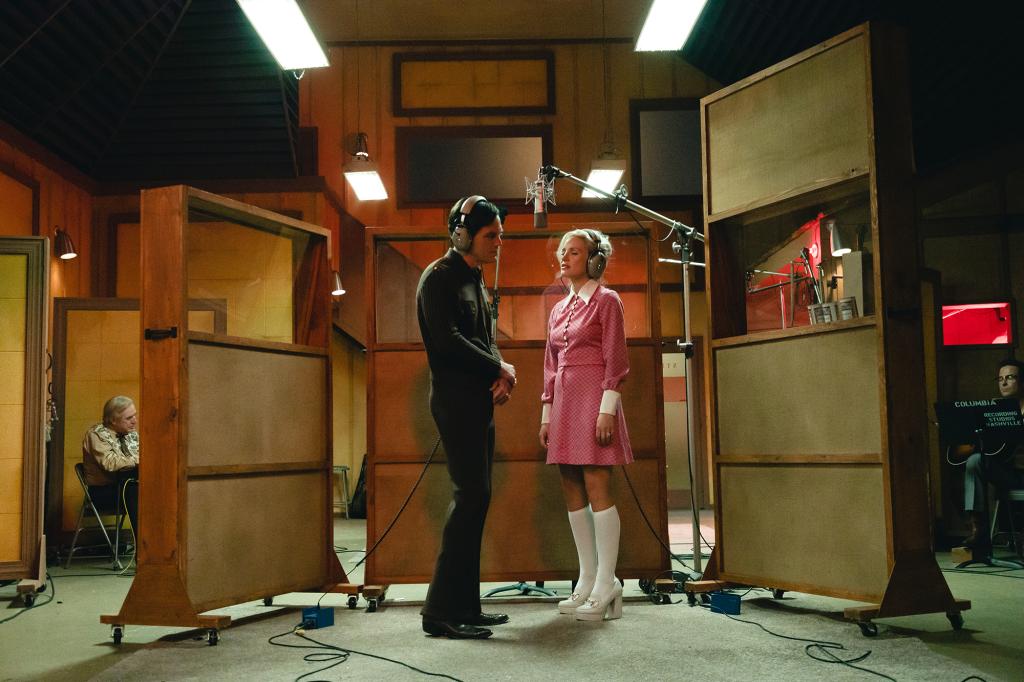 “We had over 300 people in the art department between carpenters, painters, drapers, builders, set designers … and there were an enormous amount of sets,” “George & Tammy” production designer Jonah Markowitz told The Post. “On a project like this, where we went from 1965 to 1995, you have to constantly remind yourself what era you’re in — and what’s going in George and Tammy’s story.”

Markowitz (“Generation,” “Room 104,” “Mapplethorpe) said he used colors to shade the different eras of the lives and careers of Jones and Wynette, who were married from 1969-1975 and continued to perform together after their divorce.

“I’ve done films where I used different colors for different characters or worlds or decades or flashbacks,” he said. “This was an interesting palette progression because [the story] didn’t go in a linear direction. When George and Tammy meet [in the mid-’60s] his colors are reds and greens and she’s always yellow, and when they’re at their best we get into this blue world. We looked at hundreds, if not thousands, of reference images of these time periods.”

Markowitz said the team tried a new approach to the use of colors in the ’70s-era “George & Tammy” scenes.

“I do a lot of period work, and the way we’ve come to represent the ’70s is always with the same colors: brown, avocado, orange … we wanted to do something different where we broke the molds a little bit, so we leaned into a lot of really bright colors and primary colors which were all absolutely around [in the ’70s] … their country mansion [in the series] is bright teal and the bedroom is cherry — those are just not colors you’re used to seeing in ’70s-era films.”

Markowitz and his crew also intimately recreated key historical sites in the Jones/Wynette saga: the Ryman Auditorium, home to The Grand Ole Opry until 1974; Nashville’s legendary Quonset Hut Studio, where Jones and Wynette recorded together; their many tour buses; and their suite at the Landmark Hotel in Las Vegas where, in 1971, they became the first country music artists to headline Sin City (and Jones failed to show up on opening night).

“The Grand Ole Opry moved out of Ryman Auditorium but we did have the opportunity to shoot at the original auditorium … and we actually built the [Grand Ole Opry] set from 1968, which was an amazing experience for us,” he said. “We also built the big Grand Ole Opry barn, which was the backdrop for years; we built two of those at different scales for production purposes when were were shooting in two different places.

“People saw the Grand Ole Opry every week in their homes so we really had to get the vibe of that right,” he said. “It’s the opening scene, so it’s kind of where you’re going to get country fans to lean in or lean out of the series.”

“We had photos of the original studio and … We did try to be true to form,” he said. “We wanted to make it real and supplement it, so we built these dividers that had glass pieces at 45-degree angles at face level, which wasn’t a real thing. But [director John Hillcoat] always wanted to be able to shoot and see both George and Tammy and not only when they were standing next to each other singing. So we designed ways he could either shoot through the glass or use it as a reflection to change the dynamic — and use the design to tell the story.”

Creating the many tour buses owned by Jones and Wynette posed a big challenge, Markowitz said. “There were like five different buses … and there were really intense scenes in them in such a small space … so, conceptually, it was cool to understand that these scenes were really important.”

Once the buses were brought in, Markowitz discovered that they wouldn’t work in their original form, since Michael Shannon (as Jones) was too tall to walk around comfortably. “We ended up welding two bus frames for four period buses and made them a little taller so Mike could stand, and all the panels popped out so they could shoot and we jockeyed back and forth between buses,” he said. “The decorating teams went crazy. George Jones was a little over-the-top so we tried to recreate his red bus. It’s just wild. I think he spent something like $150,000 on his bus.”

Markowitz said he had the most fun designing George and Tammy’s lavish Landmark Hotel suite during their ill-fated run in Las Vegas.

“That was super-exciting,” he said. “It’s both story- and character-based and is the kind of pinnacle moment in the series and George just leaves Tammy there, alone. Some of the researchers got a hold of the original plans from the penthouse; it’s funny, back in those days they weren’t that luxurious or big … they didn’t do these palatial suites.

“I immediately tripled the size of it with 20-foot windows,” he said. “I wanted the scale to be enormous so that, for once, Tammy Wynette felt small. She’s headlining a huge show at the top of her career with a number-one song on the charts and I wanted the camera to get so far away from her that she looks tiny, like Vegas was just going to swallow her up.

“I designed this red bed for her and, above it, a second level with a round opening with a balcony … to show her super-alone — and to balance verisimilitude and story.”

Reports: WSU football targeting Ben Arbuckle, the co-offensive coordinator at Western Kentucky, to be next OC

US probes how $550 million vanished in hack after FTX bankruptcy

Star Wars fans dressed in character take to the streets of…