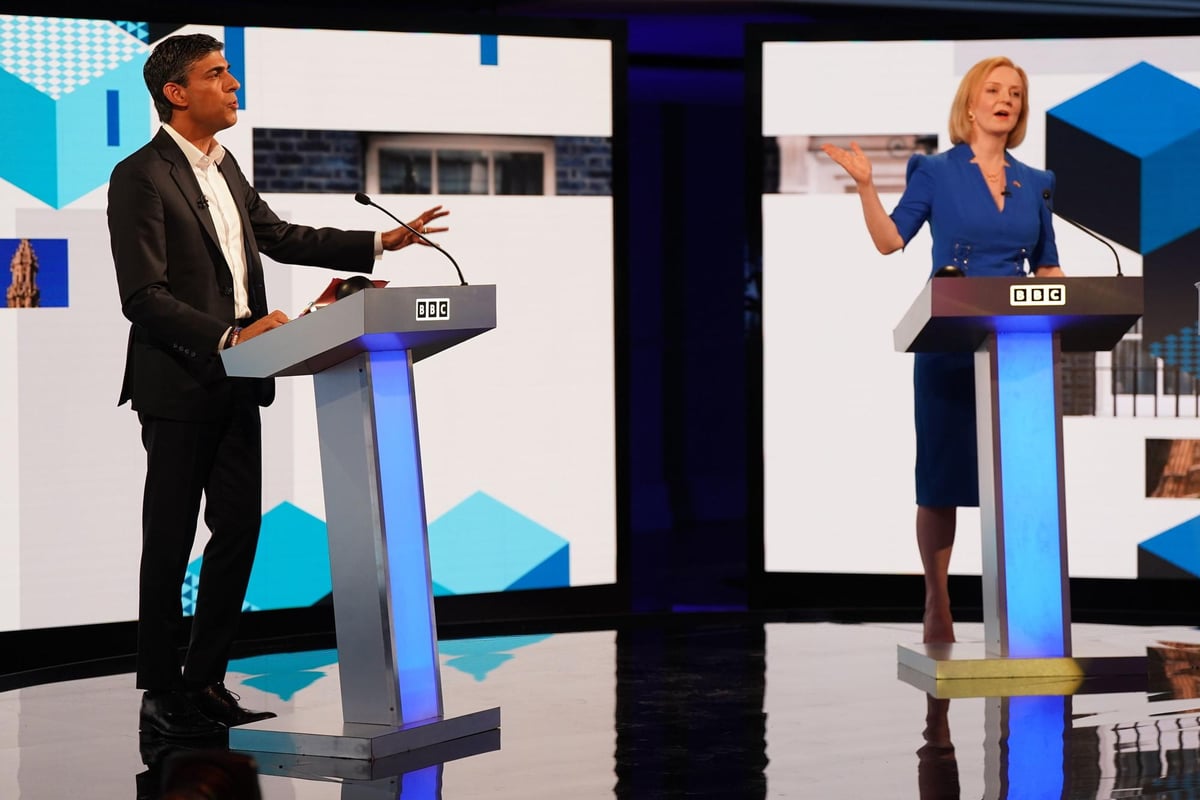 Speaking before the BBC live debate, Ms Truss attacked the unions ahead of thousands of rail workers staging a fresh strike on Wednesday in a dispute over jobs, pay and conditions.

She promised her Government would legislate in the first 30 days of Parliament to guarantee a minimum level of service on vital national infrastructure.

“I will do everything in my power to make sure that militant action from trade unions can no longer cripple the vital services that hard-working people rely on.”

A campaign spokesperson added: “Liz is determined to stand up for people who work hard and do the right thing.

“For too long, trade unionists have been able to hold the country to ransom with threat of industrial action.

“The steps she has announced today will finally allow the Government to take back control from trade union barons and deliver the economic growth we need to put money back in hard-working families’ pockets.”

Ms Truss’s plans would see tailored minimum thresholds, including staffing levels, that would be determined with each industry.

She has also pledged she would ensure any strike action has significant support from union members by raising the minimum threshold for voting in favour of strike action from 40 per cent to 50 per cent.

The minimum notice period for strike action would be raised from two weeks to four weeks, and a cooling-off period would be implemented so that unions can no longer strike as many times as they like in the six-month period after a ballot.

Ms Truss would also put an end to members receiving tax-free payments from trade unions on the days they are on strike.

Members of the Rail, Maritime and Transport (RMT) union at Network Rail and 14 train operators will walk out on Wednesday, bringing services across the UK to a halt.

Angela Rayner, Labour deputy leader and shadow secretary of state for the future of work, said: “Liz Truss is looking to blame anyone and everyone else other than herself for the mess the Conservatives have made of the last 12 years.

“Her latest Tory fantasy is dangerously out of touch with reality and ignores the stubborn fact that she has sat around the Cabinet table for nearly a decade of pitifully low wage growth, crumbling public services and sleaze at the heart of Government.

“As we saw with the Government’s plans to break strikes with agency workers, these plans are unworkable, will only erode working people’s rights further and inflame industrial relations at a critical time.”

TUC general secretary Frances O’Grady said of the proposals: “The right to strike is an important British freedom.

“Threatening the right to strike means working people lose the power to bargain for better pay and conditions.

“Instead of taking pot-shots at working people and their unions, the candidates should come up with plans to get wages rising again. That’s how to deal with the cost-of-living emergency.”

It came amid a feisty debate, with the two leadership contenders clashing over when taxes should be cut on BBC News’s The UK Next Prime Minister: The Debate show.

On when is the right time to cut taxes, Mr Sunak said: “Well look, we all took a decision to protect the economy and support the NHS through Covid and, of course, we all knew there was a bill that we needed to pay for that, so the question is should we pay that bill ourselves or do we put it on the country’s credit card and pass the tab to our children and grandchildren to take care of?

“Now, I don’t think that’s right, I don’t think it’s responsible and it’s certainly not Conservative and that’s what I wouldn’t do as prime minister.”

Ms Truss said: “Under my plans, we would start paying back the debt in three years’ time, so I’m not putting it on the never never.”

Ms Truss said: “Rishi that is not true. Under my plans we would start paying down the debts in three years’ time, Covid was a one-in-100-years event. No other country is putting up taxes at this moment, the OECD has described Rishi’s policies as contractionary.”

The foreign secretary also promised to put an economic growth plan in place “immediately”, but warned crashing the economy to pay debt back quicker was a “massive mistake”.

She said: “I would obviously make sure, my chancellor would make sure that we optimise the way we are taking out those debts.

“The point I am making is … I am illustrating the fact that when you have a major world event, a major economic shock, trying to pay back the debt as quickly as possible is not the right thing to do economically.

“We didn’t do that after the Second World War. We shouldn’t do that now. And crashing the economy in order to pay a debt back quicker is a massive mistake.”

Interjecting, Mr Sunak said: “The mistake that we will make is that at a time when inflation is already high, everyone’s already feeling it in their belt, interest rates are already on the rise, so into that situation does anyone think that the sensible thing to do is go on a massive borrowing spree worth tens of billions of pounds and fuel inflation?”

The former chancellor said that “if we do, inflation stays here for longer and interest rates are going to go up”.

Ms Dorries, a supporter of Mr Sunak’s leadership rival, pointed to reports the millionaire former chancellor has been pictured wearing a £3,500 suit and £490 Prada shoes.

She said the foreign secretary Ms Truss was more likely to be seen in a pair of £4.50 earrings from high street chain Claire’s.

It came despite Ms Dorries previously discussing her own £6,000 pair of diamond earrings.

The row over Mr Sunak’s wardrobe is the latest sign of the bitter, personal nature of the Tory leadership battle.

Cabinet Office minister Johnny Mercer warned the “puerile” nature of the contest could see the Tories turfed out of office at the next election.

“The puerile nature of this leadership contest is embarrassing,” he said. “[It’s[ time to raise the standards.”