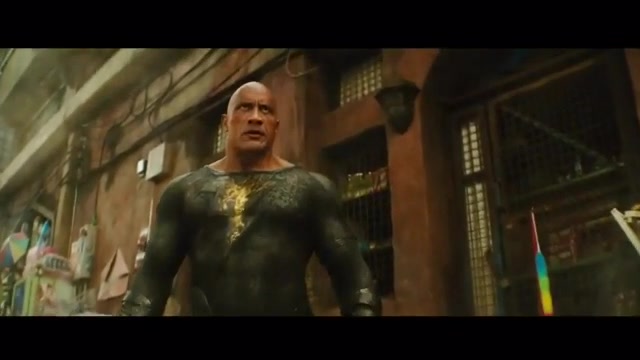 The box office wasn’t the only place where movies reigned supreme this weekend. San Diego Comic-Con was dropping new trailers left and right for some of Hollywood’s most anticipated films. Suit up, folks, because these on-screen heroes are ready to fight.

Pierce Brosnan (as Dr. Fate): “Black Adam. You believe you are not worthy, but you have two paths.”

The man in black sure knows how to make an entrance, and not just in the new trailer.

Dwayne “The Rock” Johnson took a page from Black Adam’s book when showed up to San Diego Comic-Con in full costume.

Dwayne Johnson (as Black Adam): “The world needed a hero!”

And he’s super stoked about bringing the DC comic book character armed with the powers of Egyptian gods to the big screen.

Dwayne Johnson: “They are waiting, 6,000 strong, here to see the man in black himself, Black Adam. I cannot wait. Here we go. I got my ZOA in hand. I’m cracking his one.”

Black Adam wasn’t the only superhero roaming around San Diego. The cast of “Shazam: Fury of the Gods” also took Comic-Con by storm.

Zachary Levi: “Ladies and gentlemen of the jury. We’re at San Diego 2022, we’re about to go into Hall H.”

And you know they came in hot with a new trailer for the sequel.

Zachary Levi (as Shazam): “There’s already a superhero with a red suit, with a lightning bolt on it. Aquaman is literally huge and so manly, Batman is so cool, and I am just me.”

In “Shazam: Fury of the Gods,” Zachary Levi takes on a new villain played by Helen Mirren. Now that’s something I’ll pay to see.

Hiroyuki Sanada (as Shimazu): “Have you given any thought to where this ends? The Table will never stop. You know this.”

Keanu Reeves is back, and he’s out for revenge, in “John Wick: Chapter 4.”

The legendary hitman has some unfinished business, and this time, he’s going international.

Keanu Reeves: “We have five [countries].”

Copyright 2022 Sunbeam Television Corp. All rights reserved. This material may not be published, broadcast, rewritten or redistributed.